The Beatles “IN MY LIFE”

Short read: “There are places I’ll remember all my life”

Long read: So sang the Beatles in one of their most evocative songs. Many of those places are in the “London Town” of this walk. So get back with Richard P. – “the Pied Piper of Beatlemania” –  to the film locations for A Hard Day’s Night and Help, the registry office where two of the Fabs got married, and the apartment immortalised by Ringo, John and Yoko. We’ll also see the house where Paul lived with his glamorous girlfriend, actress Jane Asher. Those were the days… for it was in that house that John and Paul wrote I want to hold your hand. To cap it all: the legendary Abbey Road studios and crosswalk. As the Toronto Globe and Mail said of the walk, “A splendid time is guaranteed for all.” “So let me introduce to you, the one and only… Richard P., the 6th Beatle.”

THE BEATLES “IN MY LIFE” – THE PRACTICALS

The Beatles ‘In My Life’ walk takes place at 11 am every Tuesday.

The meeting point for The Beatles ‘In My Life’ walk is Marylebone Tube. The meeting point is outside the main archway entrance (see the photo below) of Marylebone Railway Station.  N.B We make a short Tube journey to Abbey Road so a Day Travel Card or Oyster Card is recommended. The Beatles ‘In My Life’ walk ends at Abbey Road Studios, a short stroll from St. John’s Wood Tube Stop. 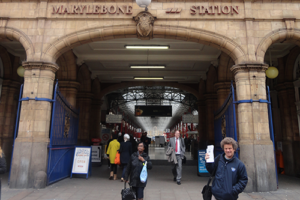 And Adam’s Beatlemania walk comes up occasionally both as a Special and as a Virtual Tour.

Finally, Adam does a wide repertory of Special Tours and Virtual Tours that range right across Musical London. The Kinks, Musical Covent Garden, Musical Kensington, Bob Dylan in London, etc. Do a search for “Adam” and “Musical” to bring them up.

“RICHARD Porter is the smartest man in Britain – at least when it comes to The Beatles. In reality, considering the Sixties pop scene was a hotbed of sex and psychedelic drugs, he probably knows more about The Beatles than the remaining members of the Fab Four can remember themselves.” Brian Crisp National Travel Editor, Escape

“When it comes to possessing a thorough knowledge of the movements of the Beatles, there are few who can surpass Richard Porter. Dubbed the “Beatles Brain of Britain,” his personal kinship with John, Paul, George and Ringo makes the London tours he conducts for London Walks some of the most popular in the city. After more than 20 years and guiding around 150,000 visitors, Richard’s lead is the one to heed. His personal knowledge adds an element of credibility that is unavailable elsewhere.”  USA Today

“The walls in front of the famous studios are smeared with a million cliches, long-standing graffiti proclaiming the fans’ undying love. Here, several years ago, Paul McCartney appeared while Porter was doing his tour. Springing cheerily from his limo, Paul consorted with the fans before vamoosing to cut his album. Porter had captured the moment. Snap! We are agog. For there it is: Paul looking cherubic. As does Porter, standing before us now, irrepressible, and so likable that you wish you could set him to music. Will lightning strike twice? Will a Beatle casually materialise? But Porter is talking again, more facts, more memorabilia. Yeah, yeah, yeah.” Traveller

Best Beatles Walk  “If you are a Beatles fan then you will love touring London with Richard P! My family had the pleasure of joining Richard on the Beatles “In My Life” walk and enjoyed every moment. The tour is very informative and hits many great spots such as John and Yoko’s home, film locations for Beatles movies, and ends at Abbey Road. Richard is knowledgeable, projects well so you can hear every word he says, and takes great care to make sure the tour stays safe and together when walking down the streets of London. I want to go back to London just to experience more tours with this company!”  Pkid71 Saginaw, Michigan

If you can’t make one of the regularly scheduled, just-turn-up, The Beatles "IN MY LIFE" it can always be booked as a private tour. If you go private you can have the The Beatles "IN MY LIFE" walk – or any other London Walk – on a day and at a time that suits your convenience. We’ll tailor it to your requirements. Ring Fiona or Noel or Mary on 020 7624 3978 or email us at [email protected] and we’ll set it up and make it happen for you. A private London Walk – they’re good value for an individual or couple and sensational value for a group – makes an ideal group or educational or birthday party or office (team-building) or club outing.

6 reviews for The Beatles “IN MY LIFE”

Reserve your place on The Beatles "IN MY LIFE"