I mean we start with – start at – Baker Street. So Sherlock Holmes for starters, what’s not to like about that. And, yes, we’ll go by the “221 B Baker Street” Museum. But a great London Walk isn’t a series of (musical) notes. It’s a series of chords. The chord here – right where we are – is Sherlock Holmes and the bank of one of London’s rivers – the Tyburn. Putting the Thames to one side (for a minute), rivers don’t loom much larger in British History than the Tyburn. After all, its branches defined Thorney Island, the site of Westminster Abbey and the Houses of Parliament. And, thus, the egg-with-a-double-yolk nature of London, which is, when you get right down to it, the reason this is the unique city. 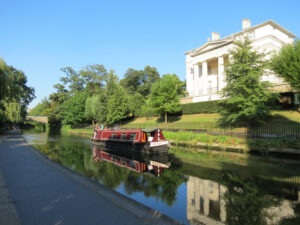 Moving on – and what a move on (gust inexpressible indeed) – one of the world’s (let alone London’s) great views – the magnificence of Regent’s Park and John Nash’s classic buildings (the Magnificent Seven). Let alone the lake – another instance of the River Tyburn getting in on the act in a stunning way.

Then it’s more river walking – Tyburn River walking (it’s great fun to find out exactly where it was and walk “along its banks” – to another of Nash’s great creations: the Regent’s Canal. And – fun (and fascinating), this – a major shift in register here. It’s a different world we’ve stepped into here. A different world bouquet’d with incidental delights – “The Upside Down House”, for example. And, there in memory wisps (and Roger and Co.’s verbal recreations), let alone some topographical clues: an early incarnation of Thomas Lord’s cricket ground.

And then another dissolve – see what I mean, more gust – another vista: Little Venice. Arguably the most beautiful residential neighbourhood in the world. Houses after the manner of Palladio. Willow trees on the island in the centre of the lake. No wonder it was home – and/or inspiration – to so many poets, authors, actors and playwrights. 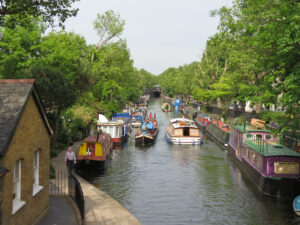 Yeah. Gust Inexpressible? Well, sure, for the glow this walk gives off. But gust visible for those pretty important organs: the eyes. And gust audible for their chums, your ears. And there are certainly gust comestibles for the t buds at the canalside cafes at walk’s end.

THE REGENT’S CANAL: RIVER TYBURN TO LITTLE VENICE – THE PRACTICALS

N.B.  You must reserve your place online for this walk 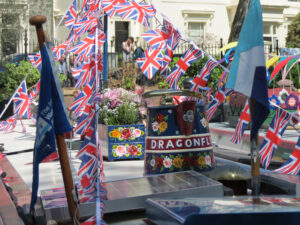 If you can’t make the regularly scheduled, just-turn-up, public Regent’s Canal – River Tyburn to Little Vence Walk walk do think about booking one as a private tour. If you go private you can have the Regent’s Canal – River Tyburn to Little Vence Walk  – or any other London Walk – on a day and at a time that suits your convenience. We’ll tailor it to your requirements. Ring Fiona or Noel or Mary on 020 7624 3978 or email us at  [email protected] and we’ll set it up and make it happen for you. A private London Walk is good value for an individual or couple and sensational value for a group. And the clincher: a private London Walk makes an ideal group or educational or birthday party or office (team-building) or club outing.

A private London Walk makes a very special, thoughtful and unusual gift.  Be it a birthday or anniversary or graduation or get-to-know-your-new neighbourhood or Christmas present or whatever. Merchandise schmerchandise (gift wrapped or not) – but giving someone an experience, now that’s special. Memories make us rich.