Short read: Welcome to the Cinderella stretch of the Regent’s Canal. 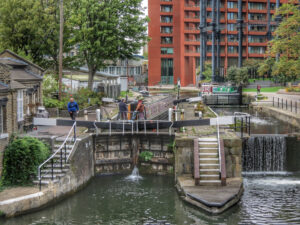 Long read: Forget the pavement, the sidewalk, the street, the beaten path. The towpath – unseen, untrodden, unexplored, unknown London – beckons. The London of a couple of centuries ago. A London of tunnels and bridges and narrowboats and locks. To say nothing of the life and death struggle between the workhorses of the canals and the iron horses of the railways. Ooh. Ah. Yes. The towpath. Shows you a stretch of London – a secret interstice of London – you won’t have seen before. And makes for a fascinating look at our past. 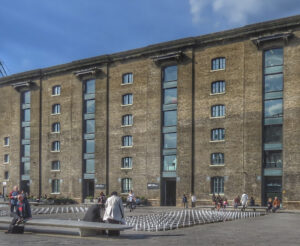 And maybe at our future. In the shape of the Granary Building complex. To see London you have to hear it. So hear this: Granary Building. That’s right. It was the trans-shipment point for cargoes of grain – from the north by rail into waiting canal barges. It’s now a hub of the fashion industry, the home of the buzz, the centrepiece of a complete transformation of the area. And more shape-shifting – a splendid nature reserve on what was an industrial site. And mind’s eye transformations as well. Great connections and asides and notations – a telling Dickens glimpse, for example. And the usual – usual? – canal life and times and culture and history details. Everything from horse dips to tow rope scars to ARP gates. All of it leading up to that “well I never” home stretch, that London historical, architectural, cultural and literary bonanza: St. Pancras Old Churchyard (the Hardy Tree, JC Bach, resurrectionists, Dickens, etc.), down St. Pancras Road (more Dickens, that amazing RAF St. Pancras tale, etc.) and St. Pancras International Station (Betjeman, etc.). Welcome to the Cinderella stretch of the Regent’s Canal. 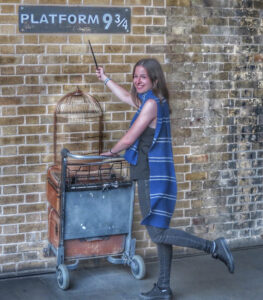 THE REGENT’S CANAL – THE PRACTICALS 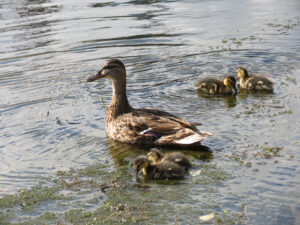 London Walks normally runs two different Regent’s Canal Walks every month. Their allotted place is the 2.30 pm Tour du Jour slot on the first and third Sunday of each month.

In addition to the bi-monthly Sunday at 2.30 pm canal walks there are always a few Regent’s Canal and other Inland Waterways “wild card” walks that come up as “specials” and in other Tour du Jour day and time slots (this 10.45 am on Saturday, October 17 Regent’s Canal – King’s Cross-Granary Square-St. Pancras walk being a perfect case in point).

As for routes – there are now over 20 different Regent’s Canal and other Inland Waterways walks. Each of them gets a couple of airings (or more) every year. They’re guided by members of the Inland Waterways Association. 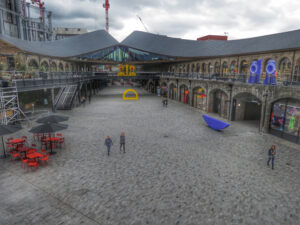 The Regent’s Canal  King’s Cross – Granary Square – St. Pancras walk is one of a series of Regent’s Canal and other Inland Waterways walks that we conduct in partnership with the IWA (Inland Waterways Association). There are getting on for a dozen different canal and Inland Waterways walks in their repertory. There are usually a handful of “guest appearance” canal walks – such as the aforementioned New Year’s Day walk – that run as “Specials” on selected dates in any given Summer or Winter London Walks programme.

There’s more. The Canal Walks guides – Aileen, Charlie, John, Mike, Richard and Roger – are all members of the IWA and have many years’ experience exploring the inland waterways by narrowboat (and, in Roger’s case, canoe). They have formidable expertise – know the canals better than “ordinary mortals.” And – how special is this – they donate their fees to the IWA. So you’re supporting a good cause – doing a seriously good turn – when you go on one of our canal walks.

If you can’t make one of the regularly scheduled, just-turn-up, public Mountain Building & Meteorites in the City of London walks it can always be booked as a private tour. If you go private you can have the The Regent's Canal - King's Cross, Granary Square, St. Pancras walk – or any other London Walk – on a day and at a time that suits your convenience. We’ll tailor it to your requirements. Ring Fiona or Noel or Mary on 020 7624 3978 or email us at privatewalks@walks.com and we’ll set it up and make it happen for you. A private London Walk – they’re good value for an individual or couple and sensational value for a group – makes an ideal group or educational or birthday party or office (team-building) or club outing.