Coventry City of culture 2021: Lady Godiva, a city reduced to rubble in one night, a new cathedral and a woman who put a cat in a dustbin 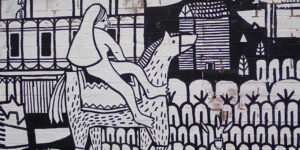 A day after Coventry had suffered a horrendous bombardment 14th November, 1940 which left much of the city in ruins, including the mediaeval Cathedral, Provost Howard wrote a message of peace on a remaining section of wall: “Father Forgive them”, calling for forgiveness in the face of violence and loss. Six weeks later, on Christmas Day, to a national BBC audience, he appealed once more for peace and reconciliation.

Such a reaction was unusual, but Coventry is an unusual city. The devastation meant much rebuilding, but pockets of the old sit comfortably by the new. It’s not a place that lives in the past. There are funky cafés, and bookshops with attitude; radical 1960s brutalism that incorporates art, a statue of Lady Godiva (who else?) the Herbert museum and art gallery, the Transport Museum, links with George Eliot, Philip Larkin, John Hewitt, Angela Brazil, a market stall selling forty-five varieties of potato. And don’t forget the music. This is the home of Frank Ifield, Hazel O’Connor, The Selecter, The Specials, of 2-tone records.

Then Basil Spence’s new cathedral, right beside the ruins of the old, with its zigzag walls, the whole decorated by the cream of the country’s artists and craftsmen, the interior jewelled with light through the floor to ceiling stained glass windows.

Welcome to Coventry, City of Culture 2021.

Tickets for our walks are restricted in numbers, so that we can be more sociable and better discuss what we have seen and learned.

This tour will be using Zoom. After you book your tour we will send you a Zoom invitation and password. NB. You will need to have downloaded the Zoom app to take part in this virtual tour.