Our pick of the best Harry Potter locations in London 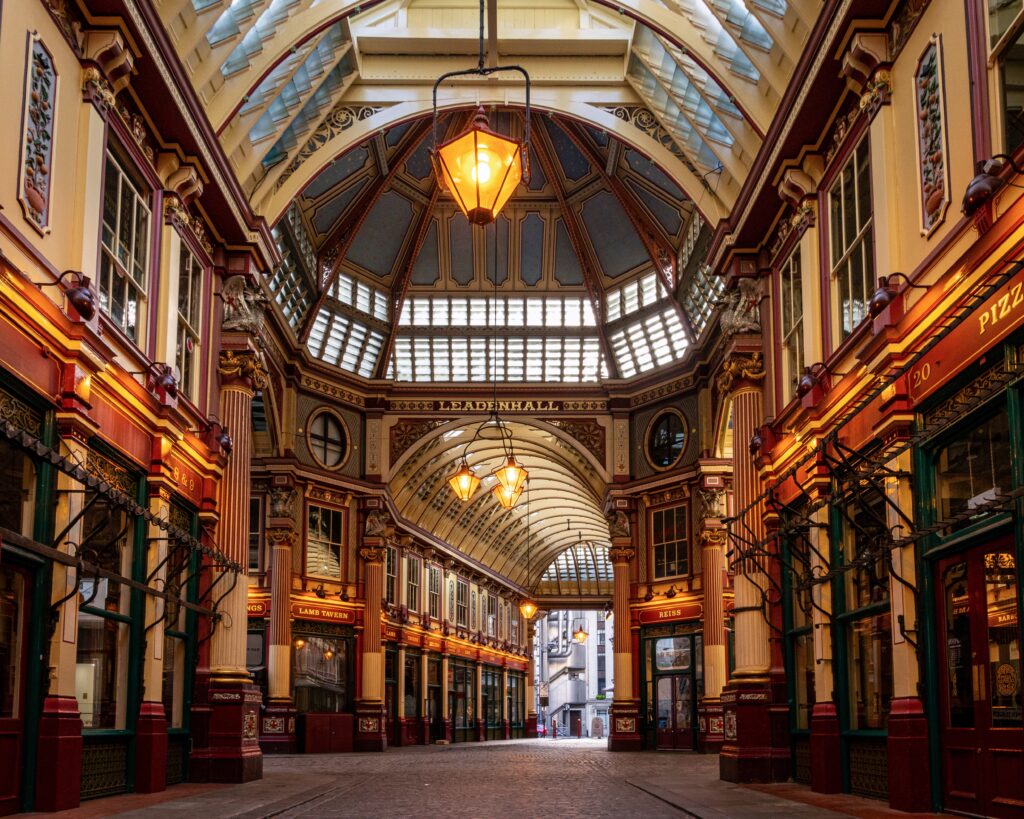 Did you know that JK Rowling’s legendary book, Harry Potter and the Philosopher’s Stone is nearly 25 years old? And the film adaptation is 20 years old? Yet Harry Potter enthusiasm is still super high.

We spoke to London Walks guide, Andy, who leads the Harry Potter walking tour for his insights. Harry Potter is a character close to his heart. His son was set to play the young Harry in the West End play, Harry Potter and the Cursed Child, until Covid struck. Sadly, his son is now too tall for the role. Such a shame.

So if you’d like to immerse yourself in the wizarding world of Harry Potter, our guided tour of locations across London is a good place to start. Here’s our pick of the spots that featured as Harry Potter film locations, those that inspired the book and those that are perfect backdrops for some Hogwarts-style selfies.

Harry Potter in the City of London

42 Bulls Head Passage in Leadenhall Market is the site of the Leaky Cauldron pub in the first Harry Potter film. In the third film, Harry Potter and the Prisoner of Azkaban, another location was used. Head across London Bridge to 7 Stoney Lane in Borough Market, next door to the Market Porter Pub and underneath the railway bridge. That was the site of the Leaky Cauldron in the later film.

Head for The George and Vulture. Next door in St Michael’s Alley, is The Jamaican Wine House. It evokes Diagon Alley or Knock Turn Alley wonderfully. The Victorian buildings are also very Dickensian and they’re associated with The Pickwick Papers and A Christmas Carol.

There’s so much history in this 17th century cathedral. But did you know that it was a Hogwarts location too? The Divination Staircase in the North Tower of Hogwarts is actually the stunning geometric staircase in the South West Tower of St Paul’s Cathedral in real life.

The fantastic opening credits scene in Harry Potter and the Half Blood Prince shows the death eaters appear out of a storm which has morphed into the shape of a skull above Tower Bridge. Staff from City Hall look on. They fly over Trafalgar Square, Nelson’s Column and Charing Cross Road disappearing into Diagon Alley, kidnapping Olivander the wand-maker. Finally, we see them destroy the Millennium Bridge which collapses spectacularly into the Thames below.

Do you remember the Knight bus in Harry Potter and the Prisoner of Azkaban? The triple decker bus that Harry boarded was filmed crossing Lambeth Bridge. The Knight bus famously squeezes between two double decker buses on the way to dropping off Harry at the Leaky Cauldron. Haven’t we all dreamt of boarding a bus that can squeeze past all the muggle traffic?!

The main entrance hall to the Australian High Commission served as Gringotts Bank for scenes in the first movie, Harry Potter and The Philosopher’s Stone with Harry and Hagrid. Unfortunately, it’s not open for you to admire the grand interior so you’ll just have to imagine the goblin-mayhem happening at the wizarding bank inside.

Andy thinks the inspiration may actually have been The Bank of England in Threadneedle Street. It’s ‘a snowy white building burnished with bronze doors’ that went down as much as it went up. It was also staffed by goblins (and some would say it still is).

Mr. Weasley (Ron’s dad) and Harry have to navigate the tube when visiting the Ministry of Magic in Harry Potter and the Order of the Phoenix. ‘Train’s underground, genius, these muggles’.

In reality, Westminster Station had to be closed for 24 hours so filming could take place. Public toilets were constructed too. Imagine the real-life grumbling muggle commuters inconvenienced that day.

If you’re looking for the guest entrance that Harry and Arthur Weasley used to get inside, you’ll be disappointed. The phone box that they entered was just a prop and isn’t there now.

Scotland Yard appears a second time on Harry Potter and the Deathly Hallows: Part 1 just before Harry, Ron and Hermione use polyjuice potion to enter the Ministry undetected.

The underground toilets in Whitehall were another spectacular location in Harry Potter and the Deathly Hallows Part 1. It’s the bit where Harry, Hermione and Ron go to the Ministry of Magic to steal the locket that Dolores Umbridge has in her possession.

It’s an amazing example of merging the reality of the location with a bit of movie magic. You’ll notice that the statue in the scene exists in reality, but the Gentlemen sign doesn’t.

Leadenhall Market and Borough Market may not have been the only locations for Diagon Alley or Knock Turn Alley. The more likely inspiration, and most often cited, is Cecil Court. It’s a charming street next to the Wyndham’s Theatre. You’ll find shops selling theatrical memorabilia, maps, first edition children’s books and there’s even a magic shop.

Diagon Alley could also be Goodwin’s Court across the road. It’s hidden away in the busy West End. The Southern side of the court dates back to the 17th Century. Andy’s insider tip is that there’s a great Italian restaurant called Giovanni’s there too.

On the run from Death Eaters at Bill and Fleur’s wedding, Harry, Ron and Hermione apparate straight to central London. In the books, they arrive at Tottenham Court Road and go to a nearby restaurant. For the Deathly Hallows Part I film however, the trio turn up right in front of a passing no. 19 bus in the middle of Piccadilly Circus. They arrive at night with Piccadilly’s world-famous electric lights on display which lend a little magic of their own to this popular London destination!

Just off Piccadilly Circus up Shaftesbury Avenue, you can spot a row of stone pillars that the trio walk past as Hermione explains to the boys where they are. Somewhere along this road is the cafe where the trio stopped to have a rest and ended up in a violent duel with Death Eaters.

In Harry Potter and the Philosopher’s Stone, Harry goes to the zoo for his cousin Dudley’s 11th birthday. In the Reptile House, he sets a Burmese python free. Don’t actually do that!

The Knight Bus comes to a sudden stop to let an old lady with a zimmer frame cross over the road right here. This scene was in Harry Potter and the Prisoner of Azkaban.

No Harry Potter guide would be complete without mentioning Kings Cross, the home of platform 9 3/4 and the gateway to Hogwarts. You can’t actually get on the Hogwarts Express. However, you can have your photo taken pushing a trolley through the wall, but you’ll probably have to queue with many other Harry Potter fans for the pleasure.

This is where Harry took off in the Ford Anglia car. Remember that classic scene?

St Pancras is a Kings Cross train station stunt double in Harry Potter and the Chamber of Secrets. It’s slightly prettier than the real thing, so it was used for some exterior shots.

And those places a bit further out of the city

This unassuming three bedroom semi in a suburban cul-de-sac has a surprising alter-ego. It’s also known as 4 Privet Drive, Surrey – Harry’s Potter’s home, and it’s complete with a cupboard under the stairs.

The Harry Potter studio tour may be branded London, but it’s actually in Leavesden, Watford. Take a train from Euston (by rights it should be Kings Cross of course). This is the studio where all of the Harry Potter films were made. You can see actual sets, costumes and props. Set foot in the Great Hall and picture yourself as part of the Hogwarts family. But would you be Gryffindor or Slytherin?