Guided by Andy H or Citlalli 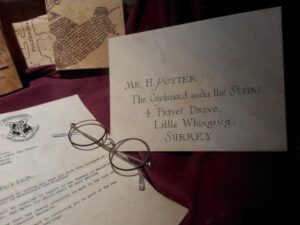 Harry Potter: “Can we find all this in London?”

Hagrid aka the Guide: “If yeh know where to go.”

Where to go on this wicked Harry Potter walking tour that burns with the hard, gem-like flame of film locations from Harry Potter and the Philosopher’s Stone, The Prisoner of Azkaban, The Order of the Phoenix and Harry Potter and the Half-Blood Prince. It also hits the sweet spots betwixt and between – the very best of mysterious, quirky, peculiar, curious, lost old London. It’s all very Harry Potter and Co. Your expert guides are muggles and actors, Andy H and Citlalli.

The Harry Potter Film Locations in the City tour starts just outside exit 3 of Bank Tube Station (by the war memorial in front of the Royal Exchange).

Meet the London Walks tour guide there. £15 adults, £10 for concs, £5 for kids. The walking tour ends at St. Paul’s Tube. Please note this is a walking tour not a bus tour.

We start our tour of the wizarding world from Bank tube station. The Bank of England may well have been the inspiration for Gringotts Bank, familiar to all Harry Potter fans from the first movie Harry Potter and The Philosopher’s Stone. Harry and Hagrid arrive in London and visit Diagon Alley where Gringotts is described as ‘a snowy white’ building ‘burnished with bronze doors’ that goes down as much as it goes up and is staffed by Goblins (still is). Muggles might also spot a deleted scene from The Prisoner of Azkaban, the Knight Bus spins around at Bank interchange and then shoots down Threadneedle Street. 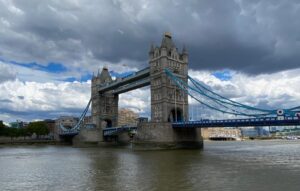 A stone’s throw away behind the Royal Exchange movie fans may also recognise the final scenes in The Bridget Jones Diaries, (it’s snowing, they kiss and the credits roll). Hidden across the road is the wonderfully evocative Ball Court, you might need a Marauder’s Map to navigate around these 18th century alley ways, we could so easily be strolling down Diagon or Knockturn Alley. It’s also a favourite location of J.K Rowling’s best would-be dinner guest, Charles Dickens, he set The Pickwick Papers here at The George and Vulture and tucked down St Michael’s Alley, Scrooge’s Counting House in The Christmas Carol.

We then arrive in the spectacular Leadenhall Market, originally a livestock market dating back to the 14th Century. All fans will recognise the opening scenes from Harry Potter and The Philosopher’s Stone as Harry and Hagrid arrive at the entrance to the Leaky Cauldron, but only ‘if you know where to go’. 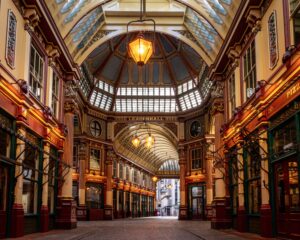 Then we marvel at our very own ‘Goblet of Fire’, above the Monument to the Great Fire of London. As we stroll across London Bridge imagining heads on spikes at the entrance, we take in spectacular views of the river Thames and City Hall, featured in the greatest opening credits of any fantasy film, Harry Potter and The Half Blood Prince. We imagine the storm morphing into a skull and the death eaters bursting out above Tower Bridge. We also remember Harry, Tonks, Mad Eye Moody and all the Advance Guard as they fly past HMS Belfast in Harry Potter and The Order of The Phoenix.

We then arrive at London’s favourite food market; Borough Market, it’s over 900 hundred years old, you can imagine Honeydukes sweet shop, Madam Puddifoot’s tea shop and The Hogwart Express above. Of course it is actually where filming took place for Harry Potter and the Prisoner of Azkaban. Ernie brings the Knight Bus screeching to a halt here, outside the entrance to the Leaky Cauldron and The Third Hand Book Store, but not before he ‘prangs’ a car and sets its alarm off.

Next, we stroll past Southwark Cathedral, through passageways and streets that Shakespeare himself would have once tread. There’s an old palace, a medieval prison and spectacular riverside vistas of St Paul’s Cathedral. Did you know the inside of the North Tower of Hogwarts is the inside of the South West Tower of St Paul’s? Its geometric staircase is used for the divination scenes in many of the films. Breath taking views await towards the Millennium Bridge. Remember it collapsing into the river in The Half Blood Prince? Look further down the river for a glimpse of the London Eye and Westminster, both of which have their Harry Potter moments. 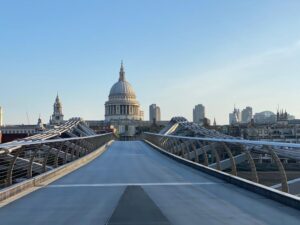 There’s so much to talk about and see – the brilliant J.K Rowling, the publishing phenomenon, the rags to riches, the auditions, the casting, the spells, the magical world, the names, we even see the real-life school Daniel Radcliffe attended.

Finally, the tour ends at Shakespeare’s New Globe Theatre, which also has a wonderful connection with Harry Potter. Remember Madam Hooch? And all in the shadow of ‘Fawkes’ the Phoenix engraved into the South Portico of St Paul’s Cathedral just across the river. There might even be a quiz.

So, brush up on your Harry Potter, bring wands and brooms. I solemnly swear we will be up to no good. And remember, if apparating, please don’t vomit on arrival. P.s no portable toasters allowed (Dragons).

This Harry Potter London guided tour takes in the myriad film locations in the City. But there are more to be found across central London from Westminster and Scotland Yard to Trafalgar Square and Leicester Square and, of course, King’s Cross station. Then there’s the Palace Theatre where you can enjoy Harry Potter and the Cursed Child. Further afield, there’s the famous studio tour at Warner Bros studios.

Take a look at our Harry Potter movie locations blog for insights into other parts of London where you can find Cecil Court, the Ministry of Magic, Knockturn Alley and more. 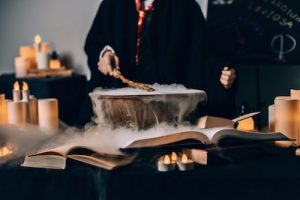 If you can’t make one of the regularly scheduled, Harry Potter Film Locations in the City it can always be booked as a private tour. If you go private you can have the Harry Potter Film Locations in the City walk – or any other London Walk – on a day and at a time that suits your convenience. It’s perfect for Potterheads who want to picture themselves walking in the world of Harry Potter, Hermione Grainger, Ron Weasley and their friends and foes.

We’ll tailor the tour to your requirements. Ring Fiona or Noel or Mary on 020 7624 3978 or email us at [email protected] and we’ll set it up and make it happen for you. A private London Walk is good value for an individual or couple and sensational value for a group. It makes an ideal group tour, educational trip, birthday party or office (team-building) or club outing. Have your very own guided tour of London with London Walks – no oyster card or travelcard required!

Find out all the details about our safety measures, how to book and cancellation info on our how to page.

Reserve your place on Harry Potter Film Locations in the City