7 things to do on Boxing Day in London

If you’re in the United Kingdom during the festive season, don’t put away your Christmas jumper too early as it’s not only Christmas Day you have to look forward to. On the 26th December, there’s Boxing Day, also known as Saint Stephen’s Day, and an official public holiday. When Boxing Day falls on a weekend, then the following Monday is a public or bank holiday. In 2022 though, Boxing Day is on a Monday, and we’ve got 7 things to do on Boxing Day in London. Christmas jumpers optional!

Saint Stephen was the first Christian martyr, known for serving the poor. Many believe the name Boxing Day derives from the boxes used to collect money for the poor in church, which were distributed the day after Christmas Day. Others believe that the ‘boxes’ were monetary tips given by the wealthy to their staff after Christmas, as mentioned by diarist Samuel Pepys in his 17th century diary. To stay true to the intent of the day, you could spend your Boxing Day ‘giving back’ by volunteering for a London charity, like Whitechapel Mission, Crisis or food bank network Trussel Trust.

Matt helping with the bags by sterlingpr

If the Christmas holidays haven’t depleted your reserves of Christmas spirit, you could spend Boxing Day in London watching a theatre show. The Old Vic in Waterloo is staging A Christmas Carol on Boxing Day 2022. For a family friendly pantomime, Dawn French, Julian Clary and Alexandra Burke star in Jack and The Beanstalk at the London Palladium on the 26th December. Or for something completely different, let the countdown to the New Year commence as you watch Moulin Rouge! The Musical at Piccadilly Theatre in London’s West End on Boxing Day. If you’re organised, tickets to a Boxing Day show can also make a wonderful Christmas gift. 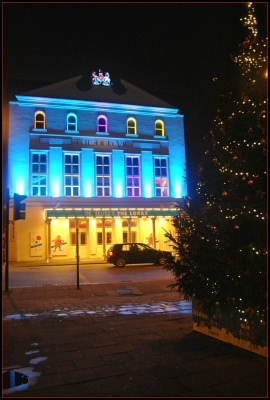 In the 18th century, Boxing Day became a time when the aristocracy would take part in sports such as hunting, shooting and horse racing. Fox hunting was banned in the UK in 2004, of course, but the tradition of sport on Boxing Day endures. If you’re spending Boxing Day in London, you could take a day trip to Sunbury on Thames for the King George VI Steeple Chase, first named for the newly crowned king in 1937. The Premier League also returns on Boxing Day, eight days after the World Cup final. Head to a sports bar to watch one of the three London derbies that will be showing on Boxing Day, with Arsenal, Brentford and Crystal Palace taking on West Ham, Spurs and Fulham. If you’re travelling into (or out of) the city, just bear in mind that even though public transport will be running on Boxing Day, there may be a reduced service, so check before you travel.

4. Go to the Boxing Day sales

In modern times, Boxing Day has become synonymous with not sport or charitable giving, but with shopping. Many stores make a seamless switch from Christmas shopping to sales, starting their January sales the day after Christmas. And where better to get the best of the Boxing Day sales than London! If you prefer to do your shopping indoors, the likes of Westfield London and Westfield Stratford City have both department stores and big name retailers. For bargains to rival anything that Amazon might offer, head to London’s popular shopping districts like Regent Street and Oxford Street. If you like to do your shopping in style though, it has to be the luxurious boutiques and labels on offer in Bond Street and Covent Garden. 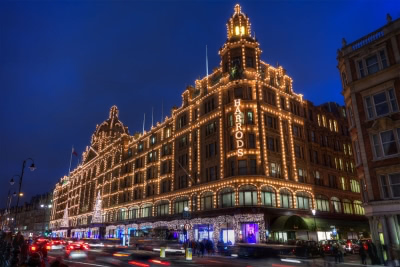 With temperatures unlikely to rise much above freezing on Boxing Day in London, get yourself wrapped up and head to one of the festive ice rinks in the capital. Like the open air rink in the grounds of Royal Museums Greenwich, the Canary Wharf Rink and Hampton Court Palace Ice Rink (dates to be confirmed). Of course the ice rink in the forecourt of Somerset House. It’s the most stunning setting imaginable for ice skating in London. It’s been likened to ice skating in St Petersburg. 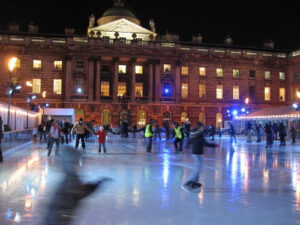 Boxing Day has been celebrated in England, Wales and Northern Ireland since 1871 but only became a bank holiday in Scotland in 1974. Make the most of this extra day of celebration by venturing to Crystal Palace Park in South London for Lightopia, their Christmas light display, featuring various installations, interactive exhibits and light trail. Lightopia begins on the 17th November 2022, and runs right through to the 2nd January 2023, including Boxing Day, New Year’s Eve and New Year’s Day. Kew Gardens will also be hosting its annual winter lights trail in 2022, from 16th November through to 8th January 2023, including Boxing Day. 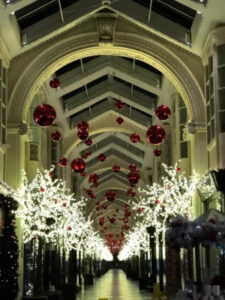 After the likely (over)indulgence of Christmas Eve and Christmas Day, it’s likely you’ll be ready for a dash of fresh air and exercise come Boxing Day. Treat yourself to a walk, and not just any walk but a London Walk! There’s a full programme of events running on Boxing Day but after the gluttony of the festive season, The Seven Deadly Sins walking tour seems particularly appropriate. You could also make an early start with the Classic Greenwich and Boat Trip, ease into the afternoon with A Village in Piccadilly or build up your appetite for an evening walk, courtesy of the Jack the Ripper Walking Tour. The full London Walks programme will be finalised in the weeks before Christmas, but there’s a strong possibility that the Charles Dickens Christmas Carol walk may well be making an appearance. Be sure to check back for any updates.