Things to do in London on New Year’s Eve

New Year’s Eve in London is the stuff of legend. Standing shoulder-to-shoulder with countless others on the banks of the River Thames, chanting a countdown to the midnight bongs of Big Ben and being wowed by the fireworks display – it has to be done. But maybe only once.

If, like us, you take offence at being charged a tenner to enter a central London pub that you strolled into the day before just because you can glimpse the sky, then read on. We have a few ideas for a London New Year’s Eve party with a difference. 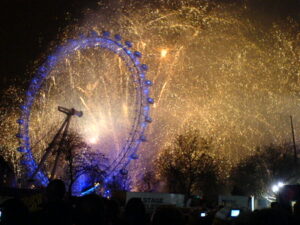 Nothing says New Year’s Eve in London more than an over-priced drink, an elbow in the ribs and the ‘ooh’ and ‘ahh’ sounds that accompany the legendary fireworks show. In 2021, New Year’s Eve fireworks were cancelled due to Covid, and experience tells us that it could happen again. But here’s hoping, we can revel in some sort of social activity at the end of this year.

If you want to join the throng in central London, you’ll find vantage points along the banks of the Thames. Head for Monument, London Bridge, Embankment or Waterloo stations. But be warned that public transport is a nightmare on NYE. Our London guide extraordinaire, David describes it as a “crush of humanity” and “truly unbearable.” Get the idea?

David’s advice is to “go against the herd.” So these hotspots would be his places to avoid at all costs. But if you want to be amongst the pulsating NYE activity, here’s where it’s at:

Indulge in a decadent New Year’s Eve in London

Our recommendation for enjoying New Year’s Eve in central London is to seriously splash out and get a hotel room with a view, a table at a Michelin-starred restaurant or book a rooftop bar. Be prepared to pay way over the odds and make an early reservation – by mid-Nov it’s going to be too late. A few of our suggestions:

Rules restaurant in Covent Garden: London’s oldest restaurant dates back to 1798 and serves classic British dishes. Deservedly, it has Michelin-starred status. Enjoy an indulgent, civilised evening in style here. The Winter Garden cocktail bar is a bit of a hidden gem. Elegant and relaxed, it’s a great spot to celebrate the end of 2022.

The Savoy: you’ll enjoy a night of revelry including live entertainment, fine food, Champagne and views over the Thames. Think old-school glamour and stylish decor. It’ll be one to remember, but it will cost you a considerable sum.

The Rooftop at the Hilton Trafalgar Square: This rooftop bar is a real find in the West End. It’s billed as a year-round experience, but that includes blankets and heaters on the canopied outdoor area. There’s also the interior deck or private dining options which offer majestic views over Trafalgar Square and the surrounding skyline.

The Shard: Party the night away with a glass of something expensive in hand whilst drinking in spectacular views from a vantage point at The Shard. Another pricey, but special one.

Looking for live music, nightclubs, live DJs and the cool crowd? Head to Hoxton and Shoreditch to hit the dancefloor.

Enjoy a simpler yet memorable New Year’s Eve in London

Parliament Hill: this North London hill is the best place to see in the New Year (according to our local aficionado David). It’s one of the highest point in London at 98 meters tall and, as such, is an amazing natural viewing spot.

Primrose Hill: another North London high spot, the summit of Primrose Hill rewards you with amazing views over central London. It’s a gorgeous, green and natural viewing platform from which to enjoy the festivities.

Often overlooked and deemed a boring, recovery day, New Year’s Day can be a great time to do something different. Try an activity, visit a new place or explore an unknown area. It provides an opportunity to partake in winter activities that have evaded you during the busy Christmas period.

Skate at Somerset House is a wonderful winter event – it’s the ultimate ice rink. Ice skating in historic surroundings is a truly memorable experience, swiftly followed by an indulgent hot chocolate. You could opt to do this on New Year’s Eve with the night sky as a backdrop, but it’s a lovely way to start the new year too. 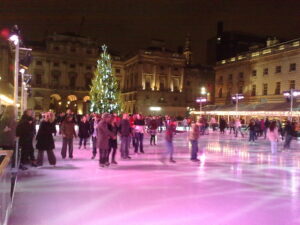 Winter Wonderland at Hyde Park is open until 2nd January, so this is one of your last chances to enjoy the event. There’s ice skating, fairground rides including the Big Wheel which provides great views of the West End and various other attractions. It’s a fun way to start January. 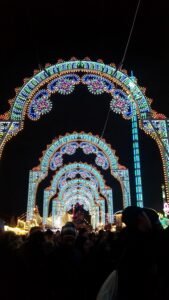 Ice Rink at Canary Wharf is another great winter spot, this time in East London. Skate beneath twinkly fairy lights and enjoy the views from this Canada Water location.

If skating’s not your thing, and you’ve had your fair share of bottomless brunches, then try a different pursuit. Start your New Year’s resolution to be more active and take a walk. You may be surprised to learn that we have an array of London walks taking place on New Year’s Day. So pull on those walking shoes and explore the capital with our insider guides.