Guided by Andy or Corinna or David or Stephen

Medium read: A walk, a performance, a Master Class in speaking Shakespeare’s lines 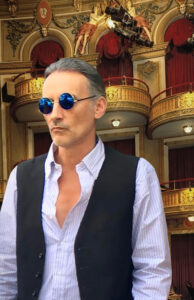 Good Listen: Here’s Guide Andy’s podcast of the interview he did with the Keeper of the Flame, the guardian of the finest Shakespeare’s First Folio in existence.

And Another Listen: Here’s David’s podcast about the “interface” between Shakespeare and London. Into the bargain it shows you how to “read” a London street. Two streets, actually.

Long read: London was to Shakespeare and Dickens what Paris was to Balzac. It held them in its thrall, was both their canvas and their inspiration, their workshop and their raw material. They, in turn, made it their own, imaginatively colonising it. And, like “special correspondents for posterity”, bequeathed it to us. Today, despite the ravages of time, riot, bombing, and especially fire, traces of their London – shipwrecks from the past – still abound in the City. Everything from superb half-timbered Elizabethan dwellings to the magnificent early 16th-century gatehouse where Shakespeare went with his plays to the offices of the Elizabethan Master of the Revels. And from London’s grandest Tudor manor house to crooked little alleys which fed the fires of Dickens’s “hallucinating genius”. Guided by RSC actor Steve or David (“none better”, The Observer) on Sunday; and by Andy on Tuesday. 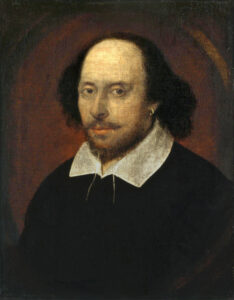 The meeting point is just outside exit 2 of St. Paul’s Tube.

The Sunday afternoon walk is guided by David (known to fellow members of the by-invitation-only Dickens Pickwick Club as the Pickwick Papers character, “Count Smorltork, the famous foreigner”) or distinguished Shakespearean actor (RSC, Sir Peter Hall’s Shakespeare productions, etc.) Steve. The Tuesday morning walk is guided by actor Andy. N.B. the walk takes about two hours and ends at Smithfield, a short walk from St. Paul’s Tube. But where we end is also very near Barbican Tube and Farringdon Station, so if either of those is more convenient for you we’ll get you sorted. 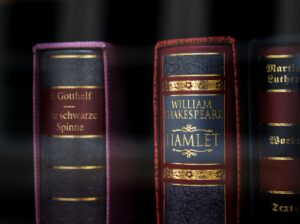 This walk has attracted a great deal of press coverage. The Times, The Observer, The Guardian have all sung its praises. And the Mail has just declared David’s Dickens Walk “one of the ten best tours in Britain” (the Mail noted in passing that David’s standing in matters Dickensian took him to Buckingham Palace to meet the Queen).

“Looking to entertain some relatives recently, I opted to drag them on a tour of Shakespeare’s and Dickens’s London by the London Walks company. At £10 a head (£8 for seniors and students) it was certainly a cheap way of spending two hours. But I didn’t have high hopes. Surely it would be one of those soul-destroying affairs in which you wander, slack-jawed, between overcrowded, underwhelming tourist hell holes accompanied by a monotonal commentary? When we met at the appointed hour at St. Paul’s tube station and bought our tickets, I was even more perturbed to find that we had been saddled with an American guide. What could a Yank possibly tell me about the city I have lived in all my life?

“Well loads, as it happens. David, it turned out, was a literary historian, university lecturer, journalist and ‘lifelong thanatophobe’ (look it up), who has forgotten more about the Big Smoke’s history than 99 percent of those who consider themselves genuine Londoners will ever learn.

“We listened, rapt, as he led us through corners of Clerkenwell and Aldersgate I had never seen, despite working in the area for almost a decade. He sonorously reeled off lines from Hamlet, pointed out the shrapnel scars in the wall of St Barts hospital and reminded us that Smithfield meat market was where men once came to sell their wives as well as their mutton. Not only that but he knows at least ten [59 actually] other routes around the capital off by heart, including the legendary Along the Thames Pub Walk. What a guy. And he’s not alone: among his colleagues are a Tony-nominated actor and world experts on Jack the Ripper, Oscar Wilde and riverside beach-combing. So bite the bullet, pick a walk and pitch up. You’ll be dining out on the anecdotes you learn for many moons to come.”  Ed Potton, The Times

“When they do it well, there are none better. I was once given a walking tour of ‘Shakespeare and Dickens’s London’ by a man from Wisconsin who could point to more Tudor houses in the City than most Londoners see in a lifetime.”  David Smith, The Observer 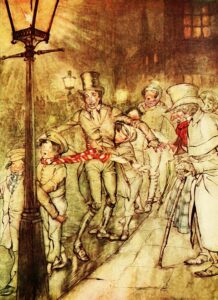 Here’s the distinguished author and critic John Sutherland’s piece in the Guardian.

“One of the liveliest PhD students I ever supervised, an American named David Tucker, with a broad streak of Barnum in his Wisconsin makeup, decided, having completed his dissertation on Dickens, against an academic career. The best way he could serve his beloved author, Tucker resolved, was by conducting street-by-street tours around the sizeable fragments of Dickens’s London that have survived the wrecking ball. He’s made a good living out of it, and done some good practical education in the process.

“Tucker’s “Original Dickens Walks” do not shirk the filthy chimneys where apprentice sweeps like Oliver Twist would – after a year or two’s clambering – contract cancer of the scrotum. Nor Newgate, where Fagin swung, tongue and penis protruding in the rictus of death, for the delectation of many of the same people who enjoyed a Dickens novel. Nor the Thames, where the Hexams fished out suicide corpses for whatever money and jewellery they took with them in their drop off the bridge. Nor Hungerford Stairs on the South Bank, which Dickens, remembering his boyhood suffering as a child labourer in Warren’s Blacking Factory, would, for the whole of his subsequent life, make long, shuddering, detours to avoid. Dickens did not always like Dickens’s world.” 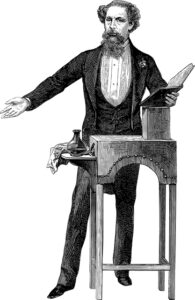 And here are the most recent ones from walkers:

“Every time my wife and I come to London we make sure we take advantage of London Walk tours. This time we chose a Dickens and Shakespeare themed walk. Our guide was a Royal Shakespeare Company actor. He took us on a fascinating journey to actual places described in these authors’ books, and through areas of London where Shakespeare lived and Dickens worked. At various points along the way he would recite, often from memory, passages from various books and plays. Standing in the courtyard of Guildhall and listening to his voice fill that vast space was truly magical… We saw where the Scottish hero William Wallace was executed, where Dickens’ character Oliver Twist would have passed on his way to a robbery, where we could touch the scars left in the walls of St Bart’s hospital by bombs dropped from a Zeppelin in WWI, all while listening to our guide recite from King Lear. If that isn’t fascinating, I don’t know what is!”  Jim W., Silver Spring, Maryland

“Stephen is a wonderful guide, interesting and informative on matters of history and literature. Never thought I would see 30 people of various nationalities sit enraptured on benches, steps and walls for over three hours. A wonderful afternoon stopping off at intriguing places listening to a voice to remember.” Magtrav Midlands

“We recently participated in the London Walks’ “Shakespeare and Dickens’ London” Tour and it was fantastic. Steve, our guide, was very entertaining and knowledgeable. We saw areas of London we would never have found on our own, and my husband said he learned more and Shakespeare and Dickens on the tour than he ever did in college! Fun, insightful, and a great bargain.” MeandMissP

“Steven was a fantastic guide for the Shakespeare and Dickens walk. We learned a lot about both authors and about London as well. Highly recommended.”  packedandready2go

“I’ve been going on London Walks for 20 years. I love London Walks. This is the best one I’ve ever been on.” the lady from Loughton 26 November 2017

If you can’t make one of the regularly scheduled, just-turn-up, public Shakespeare’s & Dickens’ London walks do think about booking one as a private tour. If you go private you can have the Shakespeare’s & Dickens’ London outing – or any other London Walk – on a day and at a time that suits your convenience. We’ll tailor it to your requirements. Ring Fiona or Noel or Mary on 020 7624 3978 or email us at [email protected] and we’ll set it up and make it happen for you. A private London Walk – they’re good value for an individual or couple and sensational value for a group – makes an ideal group or educational or birthday party or office (team-building) or club outing.

A private London Walk makes a delightful, thoughtful and unusual gift. Be it a birthday or anniversary or graduation or Christmas present or whatever. Merchandise schmerchandise (gift wrapped or not) – but giving someone an experience, now that’s special. Memories make us rich.

Reserve your place on Shakespeare's and Dickens' Old City