“Compliments of the season!” A goose and a hat are lost in a scuffle at a street corner. But where? Which street corner?  A suspect spends time in a museum. But why?  An investigation leads to a famous market. But how?  We follow the crisscrossing paths of Sherlock Holmes and Dr John Watson as they solve their only original Christmas-time case, and Arthur Conan Doyle as he reaches a crisis in his professional life. Where did the detective acquire his famous Stradivarius violin? 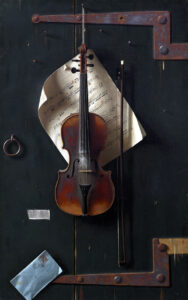 Where was the ‘Alpha’ public house which briefly hosted a hidden jewel? Where did Holmes himself live before he moved to 221b? Throw in a film location which links a silent screen Holmes and modern-day Sherlock, a fine house where one of Conan Doyle’s greatest friends lived, a theatre where the sleuth made a triumphant return on stage in the 1920s, and you have the recipe for this affectionate festive offering from the glory days of the Great Detective. Guided by Richard IV, who “specialised in early detective fiction at university, played Dr Watson on stage, contributes to the Sherlock Holmes Journal, is the Audiobooks reader for the Dr John Watson series.”

Our cup overfloweth with the three of them: Richard IV, Sir Arthur Conan Doyle and Sherlock Holmes. Which is by way of saying, every year Richard gifts us with a Conan Doyle story for the London Walks podcast. Here’s his Christmas 2021 offering. 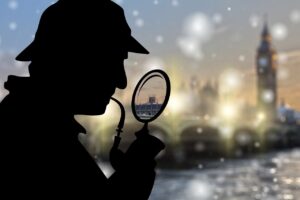 And here’s Richard’s podcast in which he talks about Sherlock Holmes, Dr Watson, Conan Doyle and the London they knew.

If you can’t make one of the regularly scheduled, just-turn-up, The Sherlock Holmes Christmas Walk it can always be booked as a private tour. If you go private you can have the The Sherlock Holmes Christmas Walk walk – or any other London Walk – on a day and at a time that suits your convenience. We’ll tailor it to your requirements. Ring Fiona or Noel or Mary on 020 7624 3978 or email us at [email protected] and we’ll set it up and make it happen for you. A private London Walk – they’re good value for an individual or couple and sensational value for a group – makes an ideal group or educational or birthday party or office (team-building) or club outing.

Reserve your place on The Sherlock Holmes Christmas Walk