This is London for foodies. Take a walking tour through the streets of London and find out what delicious food people here were eating over the centuries. From roast beef and jellied eels to Pimms no. 1 and Peach Melba – there’s a story behind them all. Glamorous restaurants and food market stalls all played their part in feeding us. Remember Covent Garden when it was the biggest fruit and veg market in the country. Edgy Soho was once the place to shop for delicious international foods and the City of London was the setting for chophouses and grand banquets.

The London streets come to life through a food tour of London’s eateries– the people who cooked it and those who ate it. And because you’re sure to be hungry afterwards there will be plenty of suggestions for lunch, from Greek fare in Notting Hill and tapas in Soho to Michelin starred Indian food in Mayfair and an authentic salt beef bagel in Brick Lane. This will be some of the very best food you have tasted in your life- eating London in every bite.

Our food tours are only £15 and last around 2 hours. Food tasting isn’t included but you will have the best address book in the city to enjoy the food in your own time. If you would like food to be included in the tour, we can organise a private food tour especially tailored to your taste! 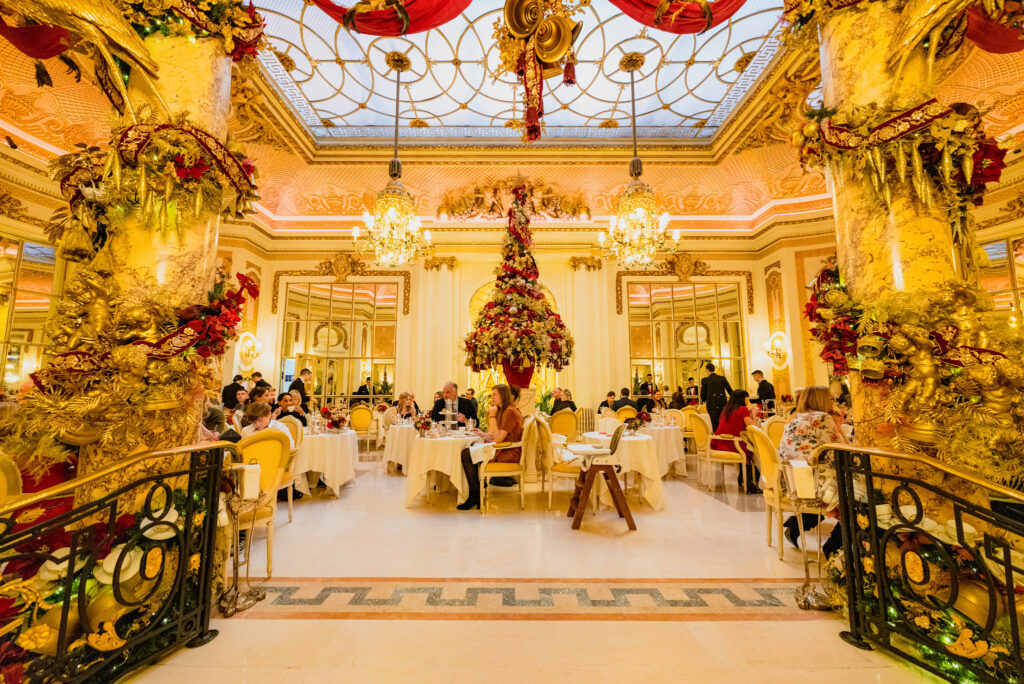 Foodies’ London – the West End next takes place at 10.45 am on Saturday, February 25th. Meeting point is just outside Green Park Underground station, London (Green Park exit, by the fountain)

What did Oscar Wilde have for lunch? Who bought their beef tea at Fortnums? Which king took a roast chicken to bed for a nighttime snack (and that’s after 11 courses at dinner)? One of our secret food tours is where you find out all of the answers. Leave the busy shopping streets to find Winston Churchill’s favourite award-winning cheese shop, in business for 250 years, and drool over some of the finest British cheeses.

And for chocolate lovers there’s the chocolate shop that supplies the Queen, where you can still buy her mother’s favourite violet creams and their chocolate truffles, first made more than a century ago, were favourites of children’s writer Roald Dahl. A chocolate tour in itself.

Soho was once the place to go for your exotic ingredients. Now it’s full of places to eat. But you can still find very special shops – the coffee store that’s been in business since 1887, the shop selling dozens of different sorts of gin, the Italian deli selling homemade pasta. These are London’s true hidden gems.

For many visitors afternoon tea at the Ritz, in London’s Mayfair is a must. But when did it start? And why?  For the answer to these and many other foodie questions – and for a visit to a street market and a foodie look at Chinatown, join Foodies’ London – the West End. 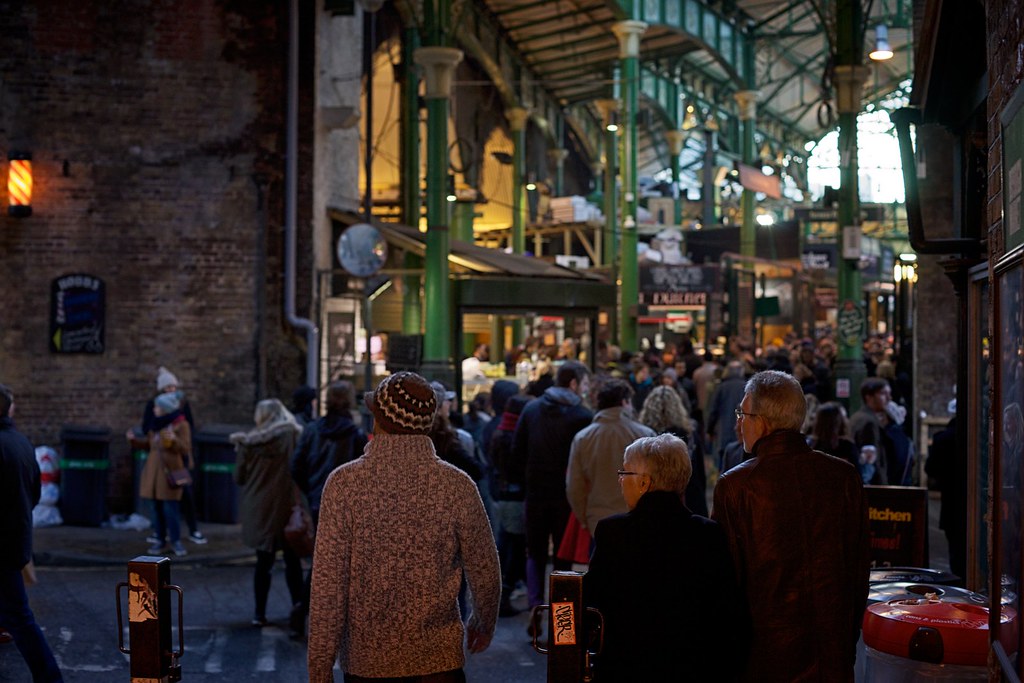 We start at the Monument – it commemorates the Great Fire of 1666, once said to be punishment for the gluttony of Londoners. Maybe because that fire started in Pudding Lane and finished in Pie Corner. There’s no fire on this walk, but lots of details about what those Londoners used to eat. We cover everything from street food like jellied eels and hot sheep’s feet, popular in Jack the Ripper’s time, to King Henry VIII’s taste in fruit and veg. Garlic? Not to be used if you had an eye for the ladies – they would find the smell offensive. Salad? This could be dangerous. Check out the history of the Tudor banana. And consider the pineapple – how this became the most fashionable of fruit and graced tables at Buckingham Palace. If you couldn’t grow it yourself you could hire one as the centrepiece for your grand dinner table.

Stop by the Thames to hear why Londoners ate so much fish. Stop on London Bridge where you can still see some of the wharves where food was unloaded for the London market. Pass London Bridge station (not to be confused with Tower Bridge), and hear how the railways brought railway milk to Londoners’ breakfasts and indigestion to travellers. Not to mention the interesting history of butter and British cheese.

And finally, a rundown on the past and present of foodie heaven Borough Market, with tips for the stalls you mustn’t miss. 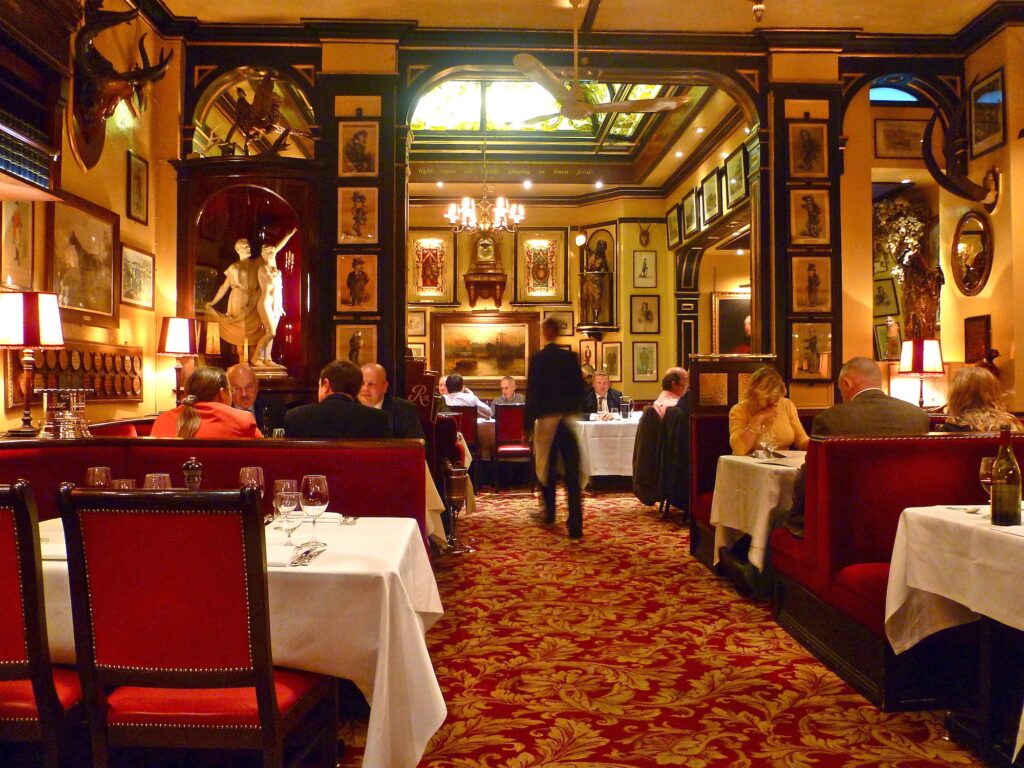 Foodies London – Pie Crust to Upper Crust will take place at 10.45 am on Saturday, February 11th. The meeting point is Embankment   Underground Station, London (Villiers Street exit). This walk showcases London’s foodie history in and around the Covent Garden district. Best known nowadays for shopping and eating, for centuries it was the biggest market in the country for fruit and veg. While the lower classes might get a snack or a pie from a market stall, the upper crust were dining nearby at Simpsons or Rules for traditional English food. Even Lady Mary from Downton Abbey dines at Rules. And maybe those upper classes went round the corner to the Savoy Hotel to sample Peach Melba, created by Auguste Escoffier, the king of chefs and chef of kings. As he said, good cooking is the foundation of real happiness. The first TV chef, the bestselling cookery author of all time and the muffin man of Drury Lane all make an appearance, as does that most famous of English dishes, roast beef.

We’ll avoid the crowd by taking some of the peaceful back streets and alleyways, and end at Twinings, who’ve been selling tea since 1706. Jane Austen, one of England’s most famous authors, was a customer, Earl Grey gave them his special recipe. How to make a proper cup of English tea? Victorian cookery book supremo Isabella Beeton will explain exactly how to go about it. All of the United Kingdom’s most upper-crust characters in one fascinating food tour. 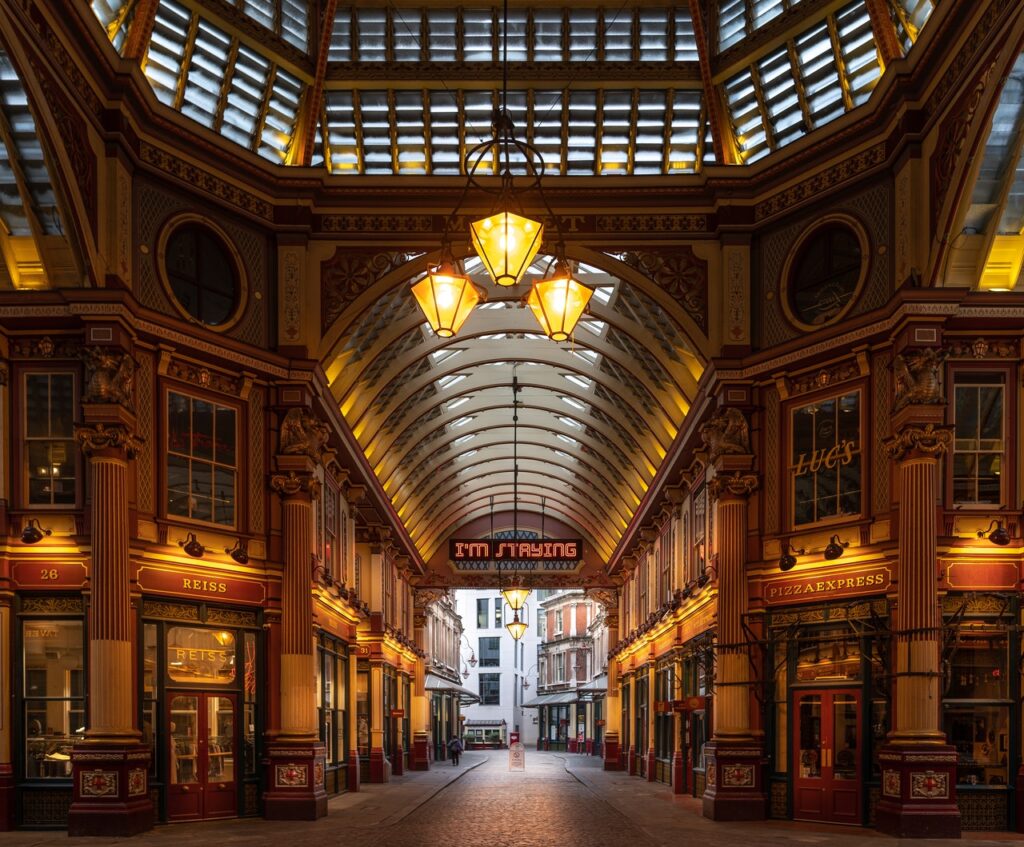 Photo by Pierre Blaché from Pexels

Biscuits & Banquets next takes place at 10.45 am on Saturday, January 28th . Meeting point is: just outside the exit of Cannon Street Underground station.

Retrace the steps of Londoners’ dinners through the ages in the narrow lanes of the City of London. This was a place for grand banquets, held in the Guildhall by the Lord Mayor. The fishmongers, grocers, vintners, distillers, bakers all controlled their trade in the City and grew wealthy as a result.  But it was also home to Victorian chop houses, where office clerks could get a quick lunch. You can dine at Simpsons chophouse today, sharing wooden benches and ending your lunch with stewed cheese.

In the 1660’s Samuel Pepys heard a lecture on the French way to make the best bread, and tasted claret from Bordeaux for the first time. And the first biscuit factory started baking in the City and businessmen queued to get the first batch from the oven. Its biscuits drew praise for their ‘crisp manufacture’.

Mr Pimm devised a drink for his oyster bar which would go down in history as Pimms no.1. Englishmen who’d worked in India brought back a taste for gin and tonic and curry. Admire the Victorian splendour of lovely Leadenhall Market where Londoners used to buy meat. Charles Dickens’s Scrooge found his turkey here, and years later Harry Potter went shopping for his wand. 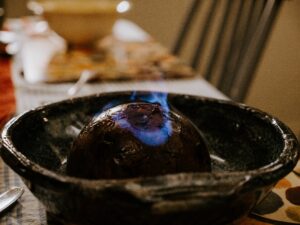 Turkey, stuffing, bread sauce, Brussels sprouts. Xmas pudding, Xmas cake, mince pies…you’ll be eating them soon. Pick up all sorts of titbits to astonish your Xmas dining companions – the turkeys that walked to London, the chequered history of the sprout, the rise and fall of the goose. Salivate over grand pudding recipes, shudder over workhouse Xmas fare. And the meaty past of the mince pie – make sure you eat 12 of them next month…and we end at that feast for the senses, Borough Market, where you can stock up on Xmas supplies.

About your tour guide 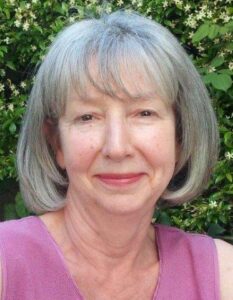 “A man may travel all around the world, and never find anything more interesting than his dinner.”

Ann has had a lifetime’s interest in food – reading about it, shopping for it, cooking it and, of course, eating it. After spending years as a journalist checking out news and politics, she can now investigate the fascinating history of food. Food is social history – how much people ate, or how little. What they ate, and when. What did Captain Cook order for a farewell dinner in the City? What was Sir Christopher Wren’s recipe for homemade wine? Then there’s the story of foods we now take for granted – there was a time when bananas, tomatoes and potatoes were viewed with suspicion. Beetroot was good for brain disorders, garlic for shrew bites.

What people ate tells you as much about society as the houses they built or the laws they passed. You might not build yourself a medieval house, but you can always cook and enjoy the same meal our ancestors enjoyed centuries ago.

Book your own private food tour, devised for your special interests. If it’s a food tasting tour that appeals, tastings and samples can be arranged for you (these can be paid for in advance). Perhaps, to hear the histories of famous food markets such as Borough Market or Spitalfields Market, with shopping tips, sightseeing and street food on the way. Or a chocolate tour of Chelsea- the choice is yours.

For our foodie recommendations, we’re going beyond TripAdvisor, to the London eateries you simply mustn’t miss.