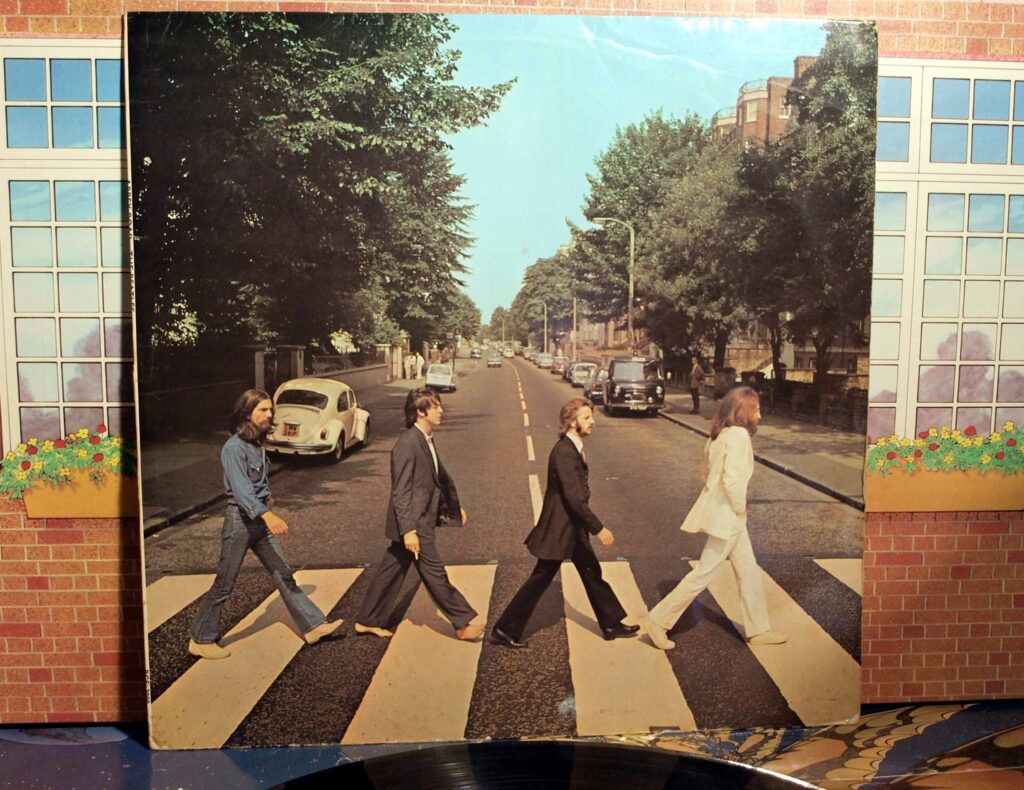 When John, Ringo, Paul and George walked across a zebra crossing in Abbey Road, St. John’s Wood at 11.35am on August 8th 1969, they created one of the most iconic album covers in history. It spawned conspiracy theories, the renaming of a famous studio, and turned Abbey Road into a place of pilgrimage for Beatles fans from all around the world. Everyone from Jon Bon Jovi and the Red Hot Chili Peppers to Woody Harrelson and Johnny Depp have recreated this famous cover on the Abbey Road Crossing. It even has its own webcam!

Over 50 years later, and with new series The Beatles: Get Back released over the thanksgiving 2021 weekend featuring unseen footage of the Beatles, and a Paul McCartney lyrics exhibition at the British Library until March 2022, interest in the band is as strong as ever. To celebrate, we asked renowned Beatles expert Richard Porter to answer the 5 biggest questions about Abbey Road.

As co-author of The Guide To The Beatles London, host of the London Walks Beatles tour and a fan since he was 13 years of age, there is no better person to give us an insight into the Beatles and Abbey Road.

Why is Abbey Road famous?

Abbey Road was the Beatles’ last recorded album (even though Let It Be came out later, Abbey Road was recorded last) and it was nearly called Everest, after a brand of cigarettes. It was even suggested that the Beatles go to Mount Everest to shoot the cover, they refused and instead made the decision to call the album Abbey Road, shooting the cover outside the studio it was recorded in. Someone, most likely Paul McCartney, had the idea of posing on the Abbey Road zebra crossing, a minute’s walk away from their recording studios. Paul’s sketch of how it should look exists to this day. The photographer was Iain MacMillan, friend to John Lennon and Yoko Ono, and the shoot took place very early in the morning for John, Paul, George and Ringo, who usually only arrived at the studios late in the afternoon. With Iain perched on a stepladder to get the necessary angle, just 6 photos were taken in all with one selected as the Beatles Abbey Road cover that we know and love today. On August 8th 2019, Richard was part of a group who organised the 50th anniversary of the iconic cover, complete with Beatles lookalike group and worldwide press attention.

What conspiracy theories did the Abbey Road album cover create?

In 1966 a rumour began circulating that Paul McCartney was dead but to protect their fame, The Beatles had replaced Paul with an imposter. Supposedly guilty at this duplicity, conspiracy theorists believed that George Harrison, Ringo Starr and John Lennon placed clues in their album covers to tell the ‘truth’. For Abbey Road, a student called Fred LaBour came up with the theory that the Beatles walking across the zebra crossing represented a funeral procession. John as the preacher, Ringo as the undertaker and George as the grave digger. Paul, being barefoot, was walking to his own funeral, said Fred. Another clue, he said, was Paul holding a cigarette in his right hand when he’s left handed, and the white Volkswagen’s LMW number plate standing for ‘Linda McCartney widowed’. The 281F part of the plate was said to signify that Paul would have been 28 if he was still alive. In truth, Paul was 27 in 1969. Having met Paul on numerous occasions during his Beatles London walking tours, this is one rumour that Richard regularly, and happily, is able to refute.

Where did the Beatles Cross Abbey Road?

Abbey Road is a thoroughfare in the City of Westminster. To get to Abbey Road, come out of the underground station at St. John’s Wood on the Jubilee Line. From the tube station cross onto Grove End Road, walking down the hill until you reach Abbey Road. Take a right turn and the shrine to the Beatles, the Abbey Road crossing, can be found right in front of you. This is the exact spot where the lads from Liverpool created the iconic cover for their final album by crossing Abbey Road. If travelling by car, the postcode is NW8 9AY. This area of North West London is also home to Lord’s Cricket Ground. But beware, there are lots of Abbey Roads in London, and there’s even an Abbey Road station. Richard’s advice…don’t let the red herrings catch you out. Stick to our steps and you’ll be at the famous London landmark in no time.

Has the Abbey Road crossing ever moved?

One of the most common questions Richard gets on his Beatles tours is if Abbey Road has ever moved and his answer is a resounding no! Contrary to popular belief, Abbey Road was not moved slightly to the south east in the 1970s, closer to the Grove End Road junction. Nor was it moved ‘a little to the north’ as was suggested by English Heritage in 2010 when Abbey Road became Grade II listed as a place of historical interest. No, this famous zebra crossing is in exactly the same place as it was in 1969. Richard even has the photos to prove it! Abbey Road was, however, resurfaced in 2018 with many Beatles fans taking to opportunity to take a piece of the old road home with them as a memento. In 2020, Westminster Council took the relative quiet period of the London roads during the global pandemic as an opportunity to repaint the white zebra stripes, which had been worn away from all of the Beatles fans walking across them.

Believe it or not, even with Grade II listed status and thousands of visitors each day- up to 1,000 per day according to our Beatles expert Richard- the Abbey Road crossing is a working pedestrian crossing. Yet, at all times of the day, you will see Beatles fans standing in the middle of the road to recreate the famous album cover. The prime time to visit if you want the best chance of getting a good replica photo, and staying safe, is at sunrise before the London traffic gets started. And after your early start, warm up with a coffee at a local café.

What is the best way to visit Abbey Road?

This one is easy. In the company of the foremost Beatles expert in the world, Richard Porter, on a London Walks Abbey Road Tour. Don’t worry, he has plenty more Beatles and Abbey Road insider stories to share!