Guided by Steven Sy or Tom

Short read: The nerve-centre of the entire war…

Long read: Let’s start with a few salient facts… 1) Where we meet – if you know how and where to look – you can see the dagger that was plunged into the heart of Nazi Germany. 2) Until the middle of 1944 there were more British civilian deaths than military. 3) Europe, like a prison door, had clanged shut – this country stood alone and at bay in guarding the future of the civilised world. And Westminster? The nerve-centre of the entire war, it was a city transformed: sandbagged tombs in the Abbey (ditto Eros in Piccadilly Circus); a pillbox and barbed wire in Parliament Square; a machine-gun nest on the Members’ Terrace; bombers caught in the scissors of searchlights; barrage balloons and air-raid shelters; nights out of the Revelation of St. John – fires that turned the moon blood red and canopied the Thames with smoke. Any of that left? Well, more than you’d think. And in some cases it’s not just “trace evidence.” That history is writ here in stone. We end at the Cabinet War Rooms, the fortified bunker that housed Winston Churchill’s centre of operations during the war. Guided by Steve Sy and  Tom 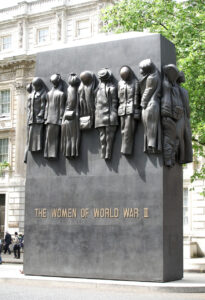 WESTMINSTER AT WAR – THE PRACTICALS

The Westminster at War walk takes place every Sunday afternoon at 1.45 pm. The meeting point is just outside the riverside exit of Embankment Tube. N.B. the Churchill Museum – the Cabinet War Rooms – where we end, is just a stone’s throw away from Westminster Tube.

And surely in order here, a mention of our other great World War II walk: The Blitz. It goes at 2.30 pm every Thursday from just outside exit 2 of  St. Paul’s Tube. 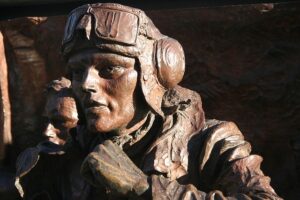 “At the Windmill, the young lovelies were on stage ‘Continuous daily from 11.15 a.m to 7.30 p.m.’ The Windmill’s line of leggy chorus girls strutted and kicked right through the Blitz, prompting the management to adopt the slogan, ‘We’re Never Closed.’ Since the Windmill was best known for its bevvy of nudes, the local wits soon changed the slogan to, ‘We’re Never Clothed.'”

“Some of the damage has been curious. A section of one big block of flats was taken out as neatly as a slice carved from a cake. Homes on Dover Street were opened up like dollhouses, so that passersby could see pictures still hanging on a wall or some trivial little ornaments still arranged neatly on a mantelpiece that was dangling in space; it seemed as though people’s lives as well as their inanimate possessions were being dissected in public.”

“When the tram reached the middle of Westminster Bridge, the driver refused to go on any further, insisting that it was too dangerous. He changed his mind after a few minutes, though, and the tram continued its interrupted route over Westminster Bridge and up the Victoria Embankment. When it reached the corner of Horse Guards Avenue, its journey ended forever. A high explosive bomb, 550 lbs of TNT, hit and exploded just behind the tram. The carriage was demolished. The driver, conductor, and all but three of its thirty-three passengers were killed instantly.” Editor’s Note: I’m haunted by this footnote to December 29, 1940. If the driver hadn’t stopped in the first place. Or if he hadn’t changed his mind, had stayed put, had heeded his sixth sense that ahead lay death. London’s history can sear your mind. I can never pass that corner without thinking about that night, that tram, that 550 lbs bomb exploding, that driver and his conductor, the thirty passengers who were killed, the three who survived. That corner isn’t just a nondescript corner in central London. It’s got meaning. It explodes in my head.

“We’ve done several walking tours with London Walks over the years and have never been disappointed. The latest one we did on a chilly Sunday in January was the one called Westminster at War. We walked around areas and up streets I’ve been to before but discovered lots of things I didn’t know about. The guide as always was very knowledgeable about his subject. The guide finished the tour by taking us to the Churchill War Rooms where we spent a couple of happy hours.”  island163  Letchworth, UK

“On our last day in London, we walked the Westminster at War tour with Rex. He was very informative and passionate about this subject. We learned so much about London and its history. Thanks for a great tour. ” Phyllis B.

If you can’t make one of the regularly scheduled, just-turn-up, Westminster at War it can always be booked as a private tour. If you go private you can have the Westminster at War walk – or any other London Walk – on a day and at a time that suits your convenience. We’ll tailor it to your requirements. Ring Fiona or Noel or Mary on 020 7624 3978 or email us at [email protected] and we’ll set it up and make it happen for you. A private London Walk – they’re good value for an individual or couple and sensational value for a group – makes an ideal group or educational or birthday party or office (team-building) or club outing.

1 review for Westminster at War

Reserve your place on Westminster at War