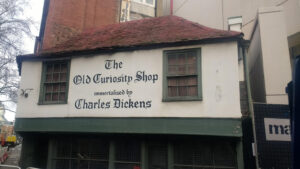 Richard takes us on a guided tour of Dickens’ London

Dickens, full of restless energy, would walk the streets of London obsessively studying his fellow human beings and their hovels and aristocratic mansions for the raw material of his novels. Much of that material was from his own life. Forced to work in a factory at the age of eleven while his father lived with the rest of the family in a debtors prison, the humiliation he felt drove him to shake off the experience of poverty and to succeed at all costs. It was not until he was a successful and famous author that he told anyone outside the family of this period of degradation and misery. He moved around all the time. Marylebone, Camden Town, Holborn, Clerkenwell, Bloomsbury, Covent Garden. As an adult he later admitted that he shunned the places he had lived in as a child but he wrote about it in his novels, particularly David Copperfield the closest he came to an autobiography. You don’t need to have read the novels to enjoy this virtual walk. Fagin, Scrooge, Oliver, Bill Sykes, Pickwick, Miss Havisham are characters that people our imaginations today on stage and screen. We meet them all as we walk the streets they inhabited.

Reserve your place on The London of Charles Dickens Virtual tour