Guided by Richard B or Simon

You are able to reserve your place online for this walk. Select your date and time on the table below.

Stonehenge: “They watched the sky move around them – Stonehenge made them the centre of the universe”

Stonehenge and Salisbury: Here on Salisbury plain, under a sky like moving marble, we’re face to face with primaeval Britain. Yes, Stonehenge. Those “storm-sculptured stones…that outlast the skies of history hurrying overhead.” Stonehenge. Observatory? altar? temple? tomb?… to serve strange gods or watch familiar stars. “You’ll never see anything like it again.” Salisbury: the river Avon and mediaeval streets lined by half-timbered houses with high oversailing upper floors and tall gables and rejoicing in names like Ox Row and Silver Street and Fish Row. Salisbury is Thomas Hardy’s Melchester and Anthony Trollope’s Barchester – and views over the meadows that Constable painted. Backcountry roads In the afternoon we’re heading back thousands of years... taking picturesque country roads that wind through rural Wiltshire, past the ancient site of Old Sarum and through a lush valley, past old churches and thatched cottages and country mansions and dry stone walls, past grazing horses and the river Avon and trout fishermen. Yes, we’re bound for Stonehenge, approaching it the way it should be approached. Bugger the motorway – that’s for “low information tourists.” Guided by Simon or Richard or Hilary. 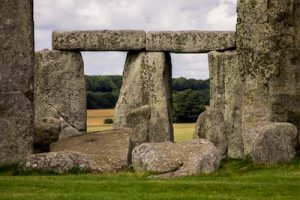 Verdict: “Best guided tour in Britain” So says the Mail about our Stonehenge & Salisbury Excursion.

Q. Why is it the “best guided tour in Britain”? A. Because of the way we do it. There are any number of run-of-the-mill Stonehenge tours. Top flight, award-winning professional guides – London Walks guides – don’t do run-of-the-mill. Our Stonehenge & Salisbury Excursion isn’t off-the-peg. It’s tailored. It’s unique – nobody else does it the way we do it. The Mail came, saw, did some comparing and got it instanta. The verdict of the comparing: no comparison – best in the country.

In the Summer 2020 London Walks programme we go to Stonehenge & Salisbury every Tuesday from May 12 through October 6.

The meeting time for the Stonehenge & Salisbury Excursion is 8.45 am.

The meeting place is by the main ticket office – it’s opposite Platform 16 – of Waterloo Railway Station. N.B. we’ll be back in London at approximately 6.30 pm. The Tariff (your train fare, entrance to Stonehenge, entrance to Salisbury Cathedral, and coach fare from Salisbury to Stonehenge) is £73. For the total cost of the trip just add the Tariff to the guide’s fee.*

*The guide’s fee for a Day Trip is £25 for adults. Or £22 for Super Adults (over 65s), students, and people with the London Walks Discount Card. It’s £8 for youngsters aged 9 to 15. Kids under 9 accompanied by their parent(s) go for free.

“BEST GUIDED TOUR IN THE COUNTRY” – THE PARTICULARS

Anything else? Yes. The Mail article got right under the bonnet of London Walks. Fun and quirky highlights: the dead rat, its brain laced with arsenic (the proof of the foul play), late of the third Earl of Salisbury’s coffin, “now displayed in the Chapter House alongside the Magna Carta.” Stonehenge guide Richard’s experience and savvy: “schooled in Salisbury he has been visiting the cathedral for 50 years.” Our guide Richard Walker’s star power: “he delivers his Harry particulars with high-beam intensity and a character voice.” Charles Dickens guide David’s expertise and standing: “PhD on Dickens…the invitation to Buckingham Palace.”

It all comes down to the guiding.

*Well, one of the 10 best. Two of our  Walks were also in the Winners’ Circle. London Walks** – three of the top ten tours in Great Britain. We’ll take that.

**And purely for the record (of course): the only London tour company to have made the grade.

In 1915, the lock millionaire Cecil Chubb bought Stonehenge for his wife. She didn’t like it, so in 1918 he gave it to the nation.

“We did three excursions with London Walks. We went to Salisbury/Stonehenge, Oxford/Cotswolds, and Bath. All three trips were wonderful. We travelled by rail to the various locations and were either able to walk to the tour areas, or we were picked up by coach buses and taken to the sites. The guides Simon and Hillary were extremely knowledgeable and fun to listen to. There was the perfect mix of guided tour and free time to explore on our own. I highly recommend London Walks. Also, the prices charged were very reasonable. The total cost was much less than the cost of the train ride alone.” Amex Traveller from Chicago, Illinois

If you can’t make one of the regularly scheduled, just-turn-up, public Stonehenge & Salisbury Excursions do think about booking one as a private tour. If you go private you can have the Stonehenge & Salisbury Excursion – or any other London Walk or Excursion – on a day and at a time that suits your convenience. We’ll tailor it to your requirements. Ring Fiona or Noel or Mary on 020 7624 3978 or email us at privatewalks@walks.com and we’ll set it up and make it happen for you. A private London Walk – they’re good value for an individual or couple and sensational value for a group – makes an ideal group or educational or birthday party or office (team-building) or club outing.

A private London Walk or Day Trip makes a very special, thoughtful, unusual gift.  Be it a birthday or anniversary or graduation or Christmas present or whatever. Merchandise schmerchandise (gift wrapped or not) – but giving someone an experience, now that’s special. Memories make us rich.

Y = Great trip – nobody else “does” Stonehenge the way we do

A = Winner of The Best Tourism Experience in England Award

Reserve your place on Stonehenge & Salisbury