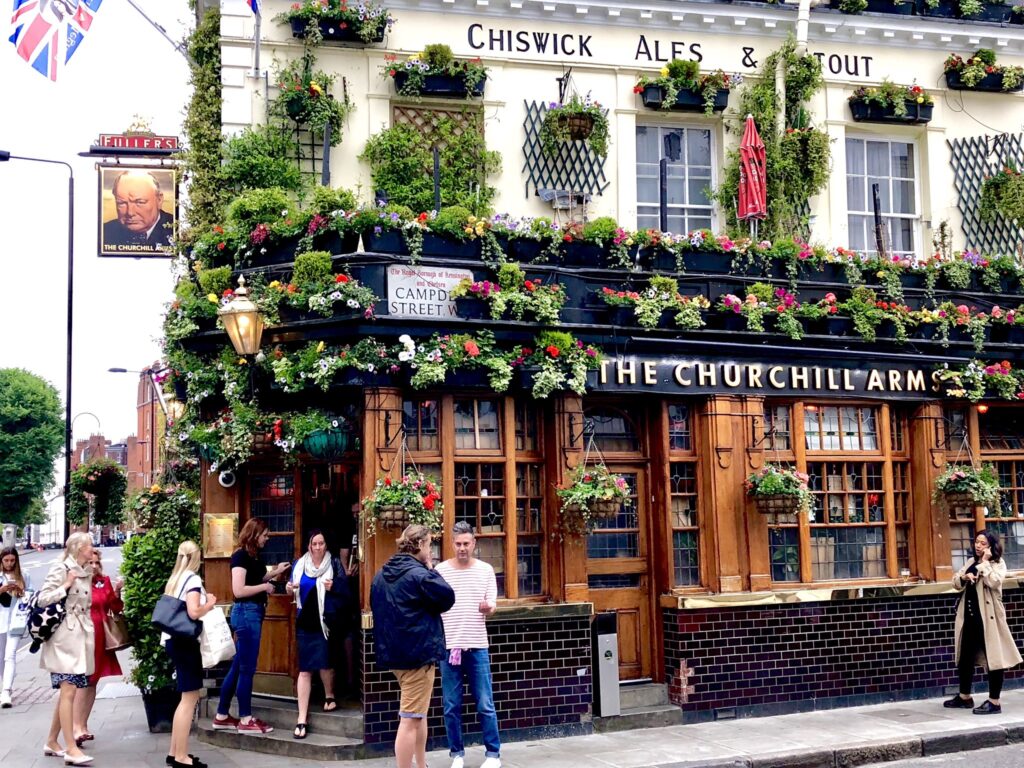 The United Kingdom is becoming known for its food. London itself is a world class cuisine capital and where better to sample its wares than Kensington. One of the most expensive residential neighbourhoods in London, Kensington in the Royal Borough of Kensington and Chelsea is also one of the most cosmopolitan too, with over 50% of Kensingtonians born abroad. So, if you venture into this corner of West London, you can expect not only a generous portion of Michelin stars but British Curry Awards winners, funky gastropubs, Egyptian cuisine and first rate Japanese food too. Here are our top picks from London Walks’ Kensington expert David Tucker. You can also listen to David’s podcast discussing his favourite Kensington restaurants.

Where to eat in and near Kensington, London?

2. Launceston Place. W8 5RL. For sophistication, fine dining and one of the best wine lists in London, Launceston Place is a Michelin starred gem situated in an elegant 19th century townhouse, close to Kensington Gardens and Kensington Palace. The late Princess Diana was so often at Launceston Place that they named a dish after her, the Soufflé Diana. In 2022, Launceston is led by Chef Patron Ben Murphy. Indulge in the seven-course lunch or dinner set menu, with optional wine pairing for the ultimate in European cuisine.

3. Chakra. W8 4LX. Hailed as the best new restaurant at The British Curry Awards in 2012, Chakra at Holland is bursting with Indian flavours. Under the leadership of Executive Chef Satyabrat Jena, formerly of Dishoom and Tamarind, Chakra is still pulling in the awards after winning a Tripadvisor Travellers’ Choice award in 2021. Promising ‘food for the soul’, Chakra boasts its own spice made with tequila, chili and lemonade, an al-fresco terrace and, according to David, a butter chicken and Goan prawn curry that you need to try.

4. Menoo Eclectic Foods. W8 4LL. Greek perfection. Starting with Pannos, who runs the place. It’s got all the tangibles. And the intangibles. You’re in W8 but if you didn’t know better you’d think you’re somewhere in the deepest Peloponnese. And then your tastebuds confirm your suspicions. As does Pannos’ hearty manner. Just a couple of table but a world of Greek hospitality. And to gild the lily, Pannos does really good Italian coffee as well as really good Greek coffee. 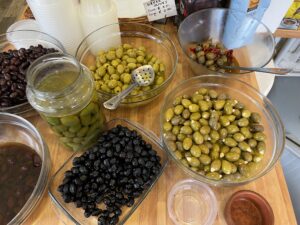 5. Akira at Japan House. W8 5SA. Authentic Japanese food beckons at Akira, situated on the first floor of Japan House, the cultural home of Japan in London. Based on Akira’s trinity of cooking principles; food, tableware and presentation, this Michelin starred restaurant is the place to experience a Japanese style afternoon tea with seasonal wagashi and sparkling sake. Menu highlights include the 3-course robata omakase menu cooked over the robata charcoal grill flames.

6. The Scarsdale Tavern. W8 6HE. What’s a ‘where to eat in Kensington’ guide without a proper British pub, and the Scarsdale in South Kensington is a blinder. Located in Edwardes Square in all its late Georgian splendour, you can gaze upon the Scarsdale’s blinding good looks (it may well be the handsomest pub in London) or you can step inside for comfort food and ale on tap.

7. The Ivy. W8 4SG. As London restaurants go, the Ivy in West Street, central London, is one of the most famous but the Ivy Kensington Brasserie has a charm all its own. Sitting neatly in Kensington High Street, indulge in the evening set menu at £35 for three courses. Perhaps the truffled wild mushrooms or steak tartare to start. A 21-day Himalayan salt wall dry-aged sirloin steak or blackened cod fillet for main, served with your choice of tasty side dish. For dessert, try the chocolate bombe or the apple tart with Calvados flambé. And if you like the Ivy Kensington Brasserie experience, you might like other brasseries in the collection too, like Soho, St. John’s Wood and Chelsea.

8. Maggie Jones’s. W8 4PL. A much loved Kensington neighbourhood restaurant for over 40 years and the place where David and Mary celebrated their 45th wedding anniversary, Maggie Jones’s is characterful, quirky and as cosy as a favourite jumper. Vintage plates, wicker baskets hanging from the beams, old dressers adorned with jugs, walk into Maggie’s and you’ll be transported to a rustic English country kitchen. It’s traditional English fare on the menu too, from pork belly with creamy mashed potatoes and apple sauce to roasted guinea fowl and Maggie’s fish pie. As Maggie’s is dog friendly, your pooch can enjoy the experience too. 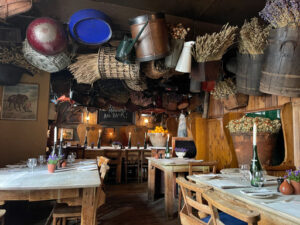 9. Ffiona’s. W8 4BA. One of Kensington’s most important streets is Kensington Church Street, connecting Kensington to bohemian Notting Hill, and it’s here that you’ll find Ffiona’s. Their brunch is the stuff of legends, from a full English to French toast and fluffy buttermilk pancakes. For dinner, the house speciality is the chicken Kiev, a free-range chicken breast stuffed with garlic butter and served on a pink peppercorn sauce. Plenty of dairy-free, gluten-free and vegan options too. 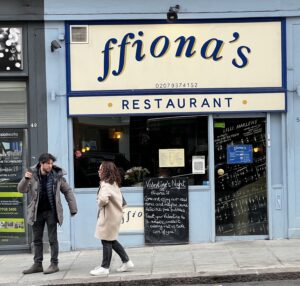 10. Churchill Arms Pub. W8 7LN. Another Kensington Church Street diamond is the Churchill Arms Pub, known in London as much for its exterior festooned with flowers and hanging baskets- or Christmas trees and lights in December- as for its interior packed with WW2 memorabilia. It is said that Winston Churchill’s grandparents frequented this pub, and Churchill’s legacy is very much on display at the Churchill Arms. As for the food, it’s Thai that’s on the menu here, from Pad Siew noodles to Kaeng Par curry.

11. Min Jiang. W8 4PT. When Babylon at The Roof Gardens in Kensington closed its doors in 2018, many mourned its loss, not least for the stunning London skyline views. But fear not, occupying the 10th floor of the Royal Gardens Hotel, Chinese restaurant Min Jiang has some of the best views in Kensington, looking out over Kensington Gardens and London beyond. They’re known for their divine wood-fired Beijing duck, prepared to an ancient Chinese recipe and presented in two servings, with both à la carte and dim sum menus.

13. The Builder’s Arms. W8 5BJ. If brunch is on the cards, head to The Builder’s Arms in Kensington Court Place for eggs pretty much any way you fancy, Benedict, Royale, Florentine and Shakshuka. For lunch, the rosemary and garlic camembert baked in sourdough is perfect for sharing. Lots of healthy options too like the vegetarian Lebanese nourish bowl. Colourful and friendly, this London pub is a good spot for a good meal.

14. Il Portico. W8 6NA. Kensington High Street is where you’ll find many of Kensington’s best eateries, like Italian, Il Portico, said to be London’s oldest family-run restaurant. Get stuck into Italian inspired antipasti, tapas, pasta like the handmade gnocchi with gorgonzola, nutmeg and walnuts, and taste the fruits of over 6 decades and 4 generations of experience. Another foodie hotspot in Kensington is definitely Old Brompton Road, home to Margaux and Yashin Ocean House

15. Montparnasse Café. W8 5ET. Located in Thackeray Street, and styled on a traditional French café, this is the place to sit awhile at a pavement table with a croissant, coffee or a patisserie style treat. Dog friendly, the in house boulangerie makes the Montparnasse Café a winner for a lunchtime baguette or slice of homemade quiche. French street food at its best.

16. Kitchen W8. W8 6AH. A Michelin starred eaterie in Kensington that achieves the relaxed neighbourhood vibe thanks to its tucked-away location and modern English fare with a French twist, which is on show in abundance in the 3 course set menu for £29.50. Get ready for delights like raviolo of salt cod, St Austell Bay mussels and Yorkshire rhubarb.

17. Grato. W8 5EP. A short stroll from the Royal Albert Hall and Hyde Park, and close to Gloucester Road, Grato in Kensington Square is a dog-friendly restaurant serving fresh Italian fare, like asparagus with parmesan fonduta, chocolate and pistachio cannoli and heritage beetroot carpaccio. The prices, pretty reasonable for Kensington, are rather refreshing too!

If Kensington’s on your must-visit list, check out the Royal Kensington Walk, guided by David or Adam. Starting at 2pm on a Thursday and Saturday, they’re an ideal after brunch/lunch stroll or pre-dinner walk. 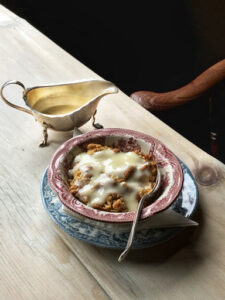