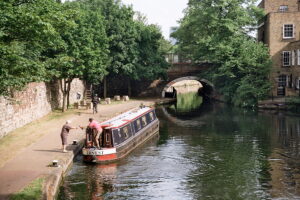 WANT A TASTER OF A CANAL WALK? HERE’S A VIDEO

Short read: Out of left field wonderful, this one. It’s London but it’s different world London.

Long read: We start at Angel Tube stop but in no time at all we’re magicked away from noisy, busy Upper Street Islington. It’s schadenfreude satisfying when we make our breakout. Turn our backs on all those motorists fuming in Upper Street traffic jams. Byeee! We’re shimmering off to catch the mental wave of the boaters gliding calmly through the Islington Canal Tunnel. Gliding underneath car-hell. Proof against it. That keynote sounded we’re there – jollying our way along a quiet, tree-lined canal. The platonic ideal of a quiet, tree-lined canal that looks like and indeed has been a popular film location. Next up: City Road basin, once a hub of waterway commerce, now a colourful playground/arena for Islington Boat Club canoeists. 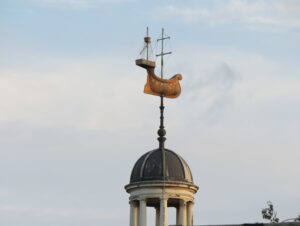 And, as always, at just the right intervals, the accompaniment of great info, London Walks info – info that changes the way you see what you’re seeing. Prime example: Wenlock Basin’s world-changing contribution to communication and commerce: it was where the world’s first sub-sea telegraph cables were manufactured. Didja remember to bring your camera? David Bailey and Annie Leibovitz remembered theirs. They’ve both worked their magic at Holborn Studios – Europe’s biggest photographic studios – right here in Eagle Wharf. Take a look at some of those Thames barges moored at Eagle Wharf. Several of them are doing good business as bases for businesses connected with the photographic studios. There’s more. There’s studio lighting but there’s also a shaft of light back into the past. Today’s barges are a reminder of the Thames sailing barges which once traded from here. The very successful contractor who first used these sailing barges is reckoned to have been the inspiration for Charles Dickens’s “Golden Dustman” in Our Mutual Friend. Then it’s past the site of Gainsborough Studios, home to a substantial chunk of film history, including Hitchcock’s first films. And how’s a fine, tree-lined saunter through a historic old park sound? London’s first municipal park, Victoria Park owes its origins to a bishop whose sermons were a bit too fiery. That’s the chapter heading. You’ll get the story there in the park. And who knows, we might even catch a glimpse of its resident ghost. This London Walk really does come over all Edenic, because we end in another big park, famous for its lushness and botanical variety. Welcome to an English rainforest of different types of trees and plants. 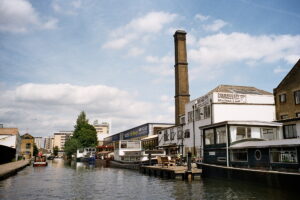 THE REGENT’S CANAL Islington to Mile End WALK – THE PRACTICALS

The Regent’s Canal Islington to Mile End walk’s meeting point is just outside the exit of Angel Tube. N.B. London Walks’ Regent’s Canal and other Inland Waterways are conducted in partnership with the Inland Waterways Association. The guides are al l members of the IWA. They have some serious expertise – know the canals better than “ordinary mortals” And – how special is this – they donate their fees to the IWA. So you’re supporting a good cause – doing a seriously good turn – when you go on one of our canal walks. 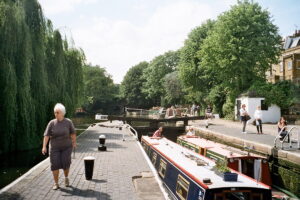 If you can’t make one of the regularly scheduled, just-turn-up, Regent's Canal – Islington to Mile End it can always be booked as a private tour. If you go private you can have the Regent's Canal – Islington to Mile End walk – or any other London Walk – on a day and at a time that suits your convenience. We’ll tailor it to your requirements. Ring Fiona or Noel or Mary on 020 7624 3978 or email us at privat[email protected] and we’ll set it up and make it happen for you. A private London Walk – they’re good value for an individual or couple and sensational value for a group – makes an ideal group or educational or birthday party or office (team-building) or club outing.

Reserve your place on Regent's Canal – Islington to Mile End