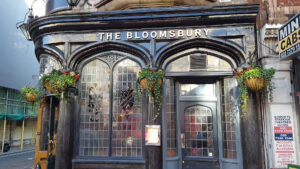 London is made up of a number of individual ‘villages’. Today,  Chris takes us to Bloomsbury, probably best known as home of the 20th century ‘Bloomsbury Group’. Controversial writers, artists and personalities. There is so much more.

In the doomsday survey of the 11th century, the manor of Blemondisberie was full of oak woods and fat pigs. Today, the home of many of London’s hospitals and academic institutions, including the British Museum and University College, and on the edge of our legal area. We will meet personalities of the ‘Bloomsbury Group’, controversial figures of the 20th century. We can also ‘visit’ a park where only children are allowed!