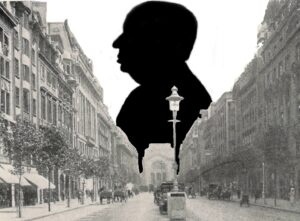 Thinking about going on this one? On your way there?  Click here for Richard’s fascinating, informative, assured, mellifluous (that Audiobooks voice of his) podcast about Hitch and London. A great listen that’s a perfect fit.

For almost half his life (and nearly half his movies) Alfred Hitchcock was based in London. Even when he went to Hollywood he continued to use British characters and themes. This walk is an affectionate celebration of the London he knew and locations used in his films from the 1920s to the 1970s. The theatres associated with his stars like Robert Donat, Tallulah Bankhead and Ivor Novello. One of his favourite restaurants. Locations for sequences in his silent classic The Lodger, his first sound film Blackmail, and others, including his terrifying farewell to London in Frenzy. It’s the story of his life and work, and how his early brilliance as a director almost ended his career. All this, plus following in the footsteps of a tour Hitch himself gave to Ingrid Bergman back in 1948. A tribute to the Master of Suspense in the city he knew best. Guided by the seriously talented Richard IV. The walk takes about two hours and ends near Charing Cross and Embankment stations.

The meeting point is just outside the main exit (the Kingsway exit) of Holborn Tube. The walk is guided by actor Richard IV, he of the velvety voice and perfect timing and Audiobook renown.

If you can’t make one of the regularly scheduled, just-turn-up, Alfred Hitchcock's London – More than 39 Steps! it can always be booked as a private tour. If you go private you can have the Alfred Hitchcock's London – More than 39 Steps! walk – or any other London Walk – on a day and at a time that suits your convenience. We’ll tailor it to your requirements. Ring Fiona or Noel or Mary on 020 7624 3978 or email us at [email protected] and we’ll set it up and make it happen for you. A private London Walk – they’re good value for an individual or couple and sensational value for a group – makes an ideal group or educational or birthday party or office (team-building) or club outing.

Reserve your place on Alfred Hitchcock's London – More than 39 Steps!