Royal palaces, mansions, and houses… the buildings occupied and used by the Royal Family are many, dotted around the United Kingdom. London has the largest number of royal family homes in the whole of Britain.  Of all the royal palaces, Buckingham Palace is the largest and most impressive, being the official London royal residence of the monarch and of course home to King Charles III.

It is said that the late Queen Elizabeth II preferred Windsor Castle just outside of London where she normally lived at weekends and throughout Easter.

If visiting London isn’t an option then why not try a Virtual Tour? Past the Palace Walking Tour is one such tour conducted by our very own Anna Targett, author of this article. Weaving the stories of royal homes dedicated specifically to British queens she will entertain you with a fascinating hour of beautiful royal residences and fun stories. 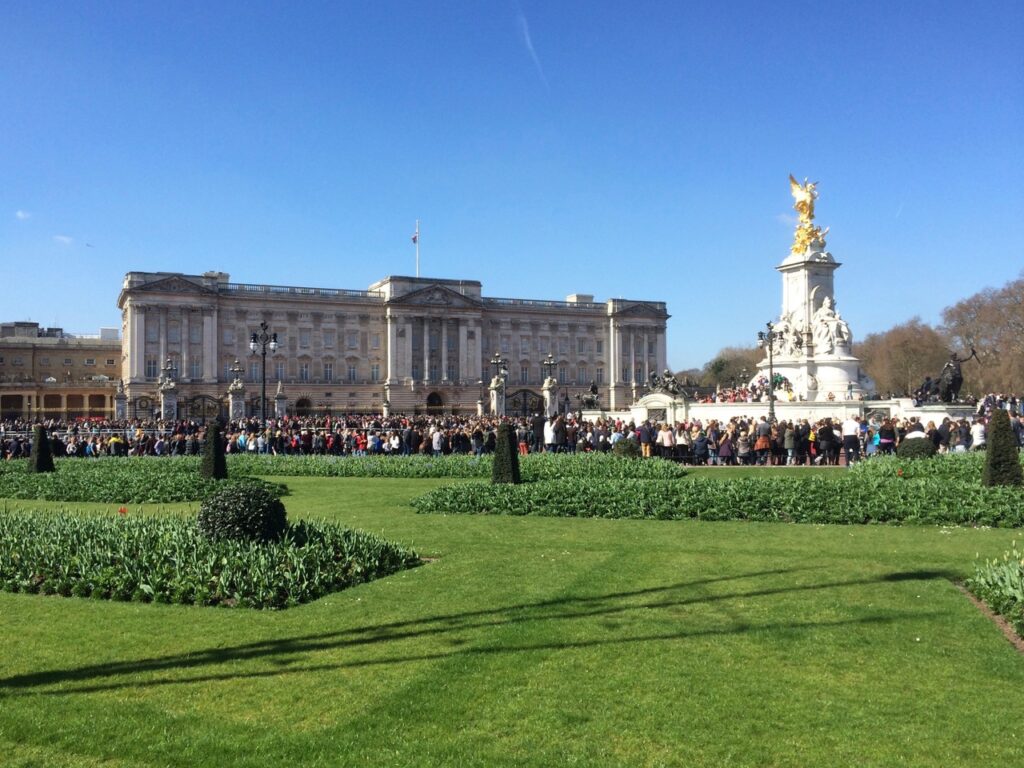 Buckingham Palace is the largest of all the historic royal palaces and is used as “The Office” for the King and the royal court. It grandly sits in a prime location close to the government in Westminster and is used for receptions and events with its grand state rooms. Buckingham Palace is also the focal point for any celebrations relating to royalty. Many people will remember Brian May of the rock band Queen playing ‘God Save The Queen’ from the roof of Buckingham Palace to celebrate 50 years of her monarchy in 2002. Wow! That was a great concert! 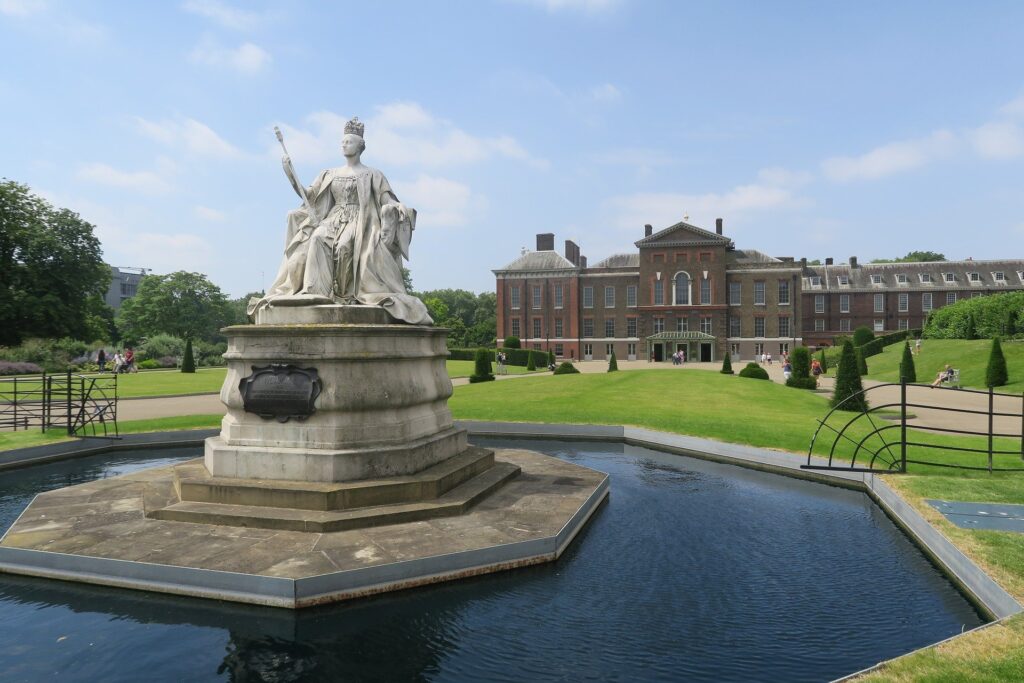 Dukes, duchesses, princes and princesses have made Kensington Palace their home with the larger part of the palace complex divided into separate apartments. Back in the 17th century, William III and Mary II commissioned Sir Christopher Wren to transform the then mansion into a suitable royal residence.

Until very recently, Prince William and Princess Katherine, the Prince and Princess of Wales lived here with their three children, George, Charlotte and Louis. They are currently residing in Berkshire. They used to live in Apartment 1a, where William’s great-aunt used to live, Princess Margaret. This is not a small apartment but a 20 room private residence which takes up one wing of the large rear section of Kensington Palace.

Famously, Kensington Palace was the home of Princess Diana, former Princess of Wales, too. She lived in Apartment 8, which is rather smaller than the current home of Prince William the Prince of Wales, and she continued living here after her divorce from King Charles. The spotlight fell on Kensington after her death and it was from here that the funeral cortege left to travel to Buckingham Palace and from there to Westminster Abbey for her funeral. An extremely moving occasion which most who witnessed it will never forget.

Historically Kensington Palace is most linked with Queen Victoria, who was born at Kensington. It was here that she learned she was to become queen, here that she held her first government meeting with her privy council and it was here that she met the love of her life, Prince Albert.  It is now possible to visit those historic rooms where she lived along with the most impressive state apartments, many of which occasionally feature in period film productions. 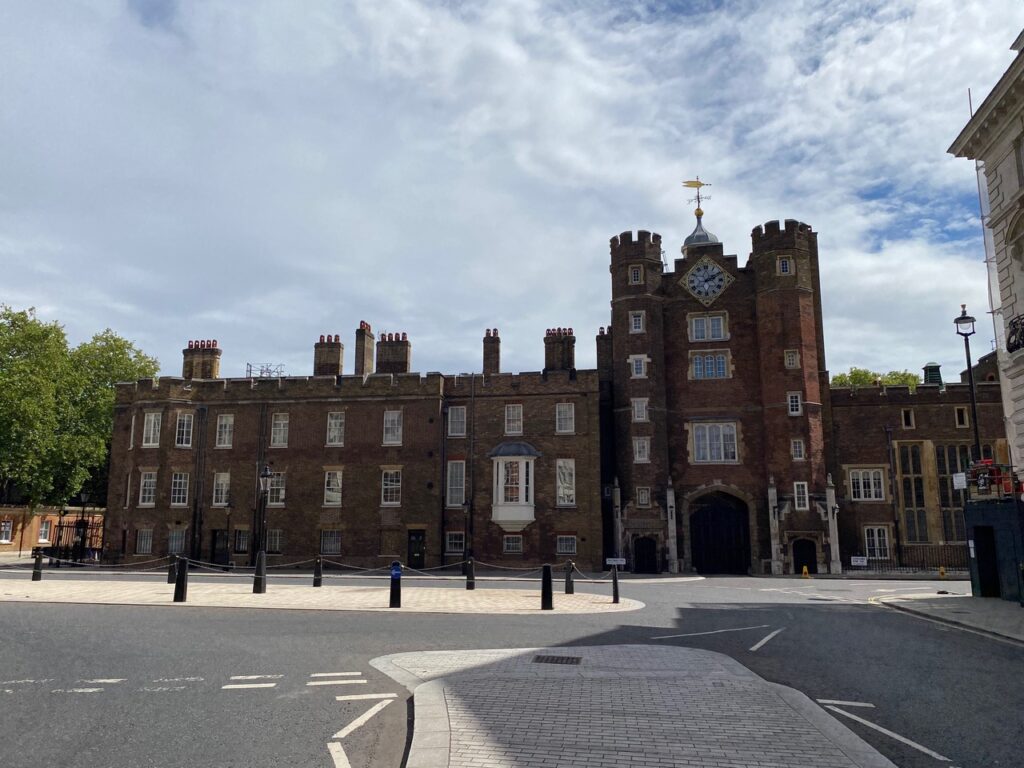 St James’ Palace is also an official residence of the monarchy. When Buckingham Palace was bought as Buckingham House for King George III it was thought that the new home would be a place to live, whilst St James’ Palace was for receptions and formal events. It is now another working palace and is still the official home of the ‘court’. All ambassadors are accredited to the Court of St James.

St James’s Palace has provided a convenient London apartment for many royals who live outside London. Prince Charles lived here for a while until the death of the Queen Mother in 2002 who had lived next door in Clarence House. He moved into her former home and he divides his time between London and his country house in the Cotswolds.

The Tower of London 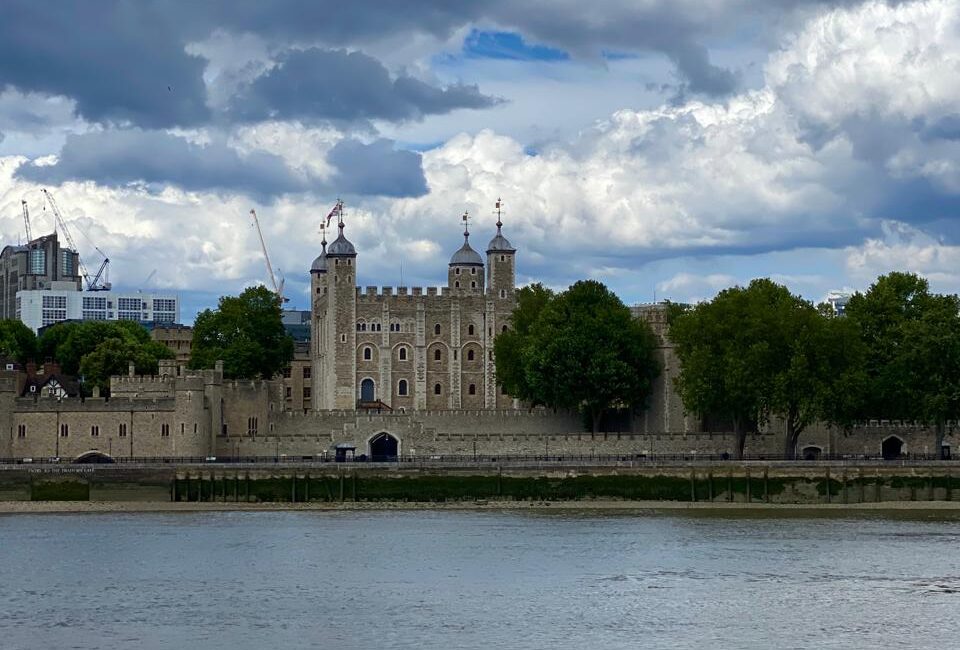 There are many other royal residences which are no longer used by the Royal Family. The Tower of London is officially named ‘His Majesty’s Palace and Fortress’ and even has a house inside its walls called ‘The Queen’s House’. Inhabited by many kings and queens throughout history, The Tower was rarely used as a principal home but was traditionally the place from which the coronation procession started. We now remember it better, of course, as a prison and for beheadings and executions. There are plenty of fabulous stories related to these, such as the beheading of Anne Boleyn in the Tudor times! This is where the Crown Jewels of the United Kingdom are kept and is well worth a visit. 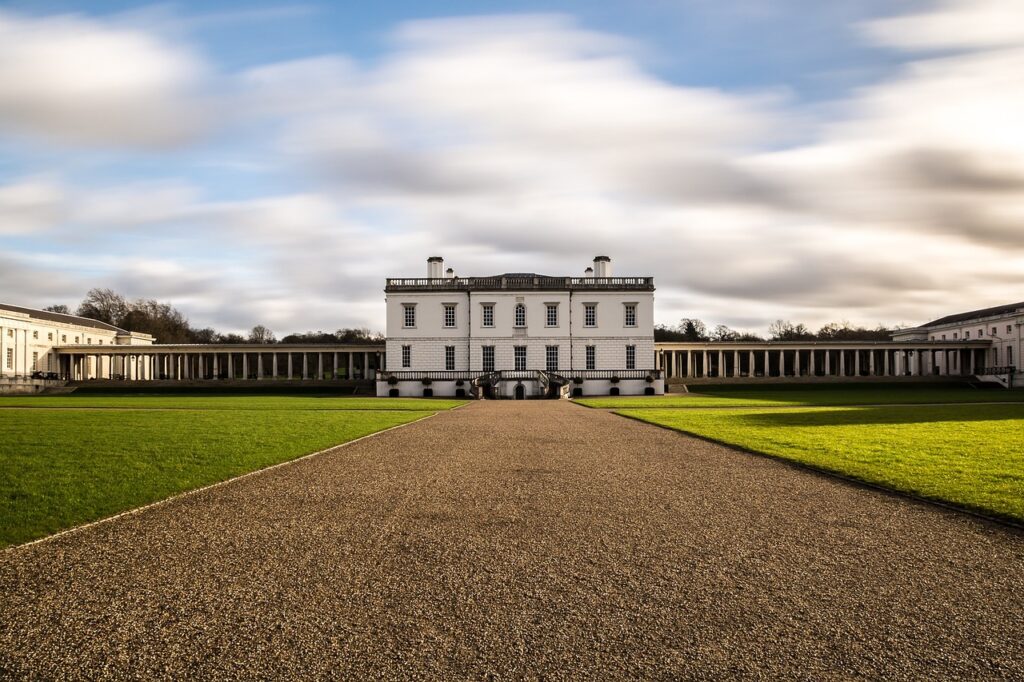 There is another Queen’s House in Greenwich which is a beautiful, yet relatively small building in a stunning location facing the Thames. This was associated with several queens in the 17th Century, being built especially for Queen Anne of Denmark. Sadly she didn’t live long enough to see it finished and so her daughter-in-law, Queen Henrietta-Maria was the queen for whom it was finished. This Queen’s House is open to the public and is a must-see for visitors to Greenwich. 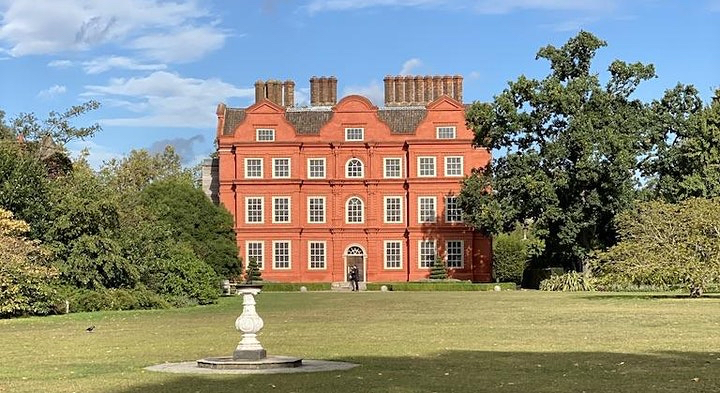 Out at Kew, in the centre of the Royal Botanic Gardens is another former royal residence. Originally called the Dutch House it is now known as Kew Palace and was the place where King George III and his wife Queen Charlotte loved to spend the summers with their 15 children. Sadly, it also the place where George III was treated by his doctors during his illness or ‘madness’, which plagued him on and off for the last two decades of his life.

The Palace of Westminster 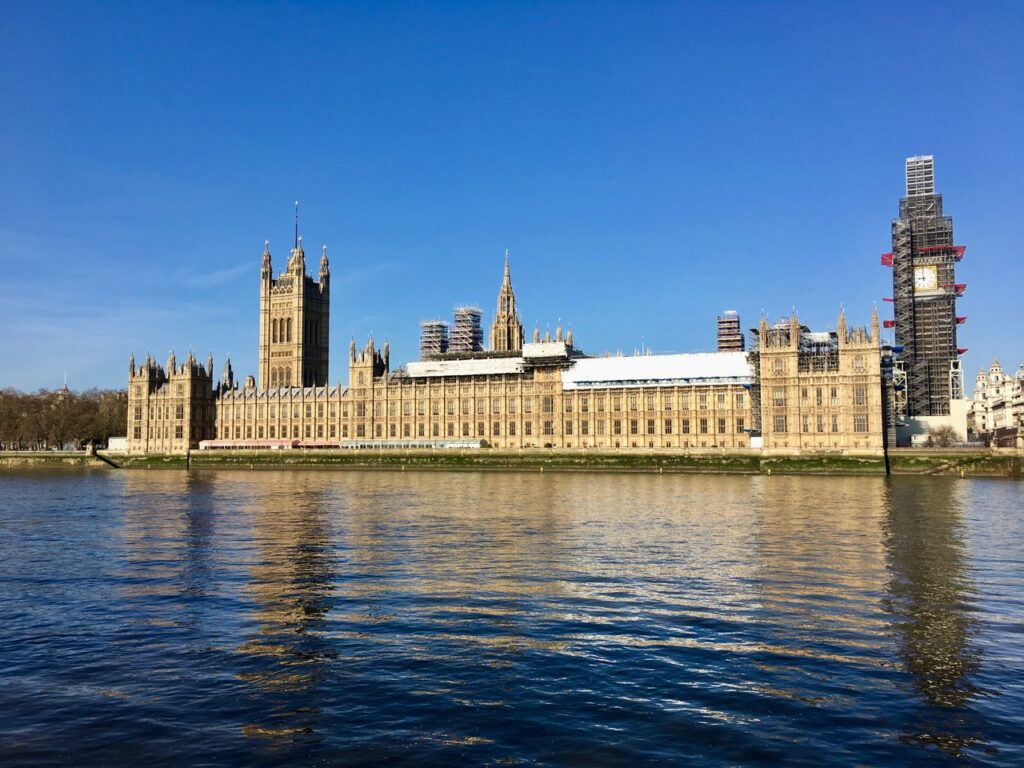 The Palace of Westminster, now better known as the Houses of Parliament, was also once a royal residence being last used by King Henry VIII. The current building is much more recent and is now the home of government. Whitehall Palace, once the largest palace in Europe, also stood nearby but was sadly was destroyed by fire in 1698. Banqueting House is the only part remaining of this huge royal complex and is worth the visit just to see its spectacular ceiling by Peter Paul Rubens. 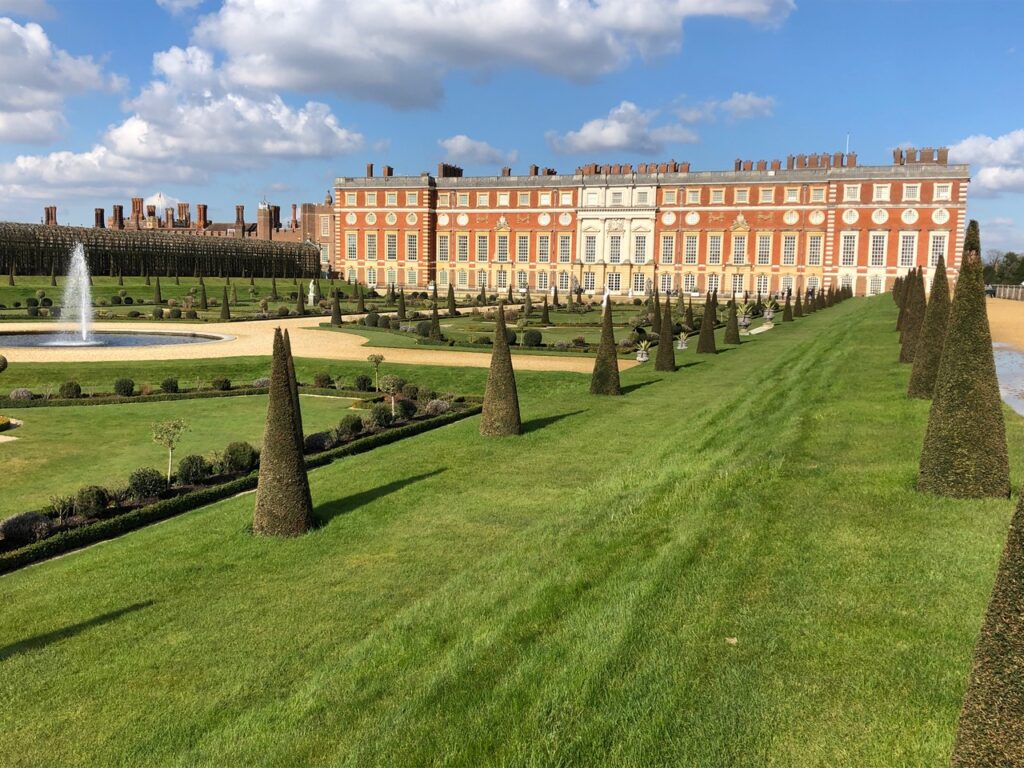 Built to be the height of fashion 500 years ago, it offers a double whammy for the visitor. Firstly, the extensive Tudor kitchens, the Royal Chapel and the Great Hall with its amazing ceiling. Look out for the eavesdroppers in the rafters!

Secondly, the rear of the palace was built 200 years later by King William and Queen Mary in an attempt to rival Versailles, home to King Louis XIV of France. Room after room are filled with tapestries, priceless works of art and amazing painted ceilings.

Hampton Court Palace has been open to the public since the time of Queen Victoria and it is worth making the 45 minute journey out of London. Why not make it a full day by taking strolls through the fabulous palace gardens? You might even see how Real Tennis is played… not so different to when Henry VIII played here. 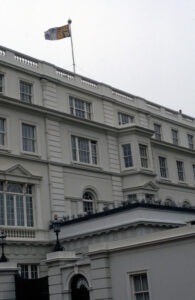 Clarence House was famously home to Queen Elizabeth, the Queen Mother, for nearly five decades when her daughter ascended to the throne. She loved to hold parties here, along with her daughter Princess Margaret.

Princess Elizabeth and her new husband The Duke of Edinburgh, lived there when they were first married, before the weight of the crown was fixed firmly onto her. The house on The Mall dates back to 1827 when it was built for the Duke of Clarence (hence the name). Sadly it’s not currently open to the public. 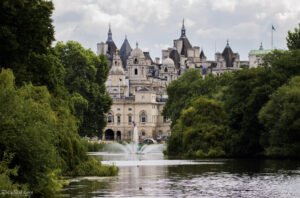 Originally named York House, this was Cardinal Wolsey’s masterpiece. But he made it too rich and sumptuous, so Henry VII coveted it and what Henry VIII coveted… became his royal residence and the most important London palace for a century and a half.

The Banqueting House is the most remarkable aspect. It was designed by Inigo Jones in 1623 and changed English architecture forever. Jones had travelled extensively in France and Italy where he was influenced by ancient Rome and the Renaissance. The result is beyond sensational – a double cube structure with an intricate carved and gilded Reubens ceiling.

It was the chosen site for the execution of Charles I rather than the Tower of London, showing its importance at that time. In 1698 it caught fire – a blaze started by sheets drying over a brazier. Much of the timber structure was destroyed, but the magnificent Banqueting House survived.

Our Tudor Whitehall walk is the perfect opportunity to find out more.

British royalty has many palaces they call home, mainly across England and Scotland. This is where they escape from the eye of the public and enjoy family time.

Sandringham Estate is in the Norfolk coast area and the private home of the late Queen. When he retired, the late Prince Philip, the Duke of Edinburgh, lived in Wood Farm on the estate. Since 1988, the members of the royal family have been gathering on Christmas Day at Sandringham.

Highgrove, situated in Gloucestershire, is the home of King Charles III and Queen Camilla. This is where Prince William and Prince Harry spent most of their childhood. King Charles III created a wild garden which now attracts 30,000 people annually.

Primarily a country house and private property of the Monarch, located in Aberdeenshire, Scotland. Every summer the late Queen spent her summer break at Balmoral. It was originally purchased for Queen Victoria by Prince Albert in 1852.