This one is by David and, yes, it’s called God’s Assassin.

God’s Assassin. That’s what this podcast is called. That’s who stars in it.

In yesterday’s Twelve Days of Christmas Podcast we learned from Chris that pigeons are actually on the marquee of that famous Christmas Carol. You know the drill: on the second day of Christmas my true love gave to me two turtle doves…

But anyway, Pigeons are on the marquee of the second day of Christmas because it turns out there’s no scientific difference between doves and pigeons. They belong to the same aves ei vuhs. A-vuss family. In fact, the so-called common pigeon also answers to the two names: rock pigeon and rock dove.

But rock doves – ok, that’s enough of that, let’s call them pigeons – they were yesterday’s fare. They don’t have star billing in this podcast.

The star of this show is called God’s Assassin.

Yes, that’s right. God’s assassin. That’s what they call him. But he’s got some other names as well. Or aliases if you prefer.

Like that one a lot. Sounds right, doesn’t it? Rufus…rough…ruffian.

Rufus has got a moll.

Her name is Imogen.

And look, let’s sing like a canary here. When “God’s Assassin’s” got a “job” to do Imogen’s right there with him. Helps him case the joint. Steadies him when it’s all over. Is his getaway driver. Not to put too fine a point on it, Rufus is high strung. Imogen keeps him on a short leash. Rufus may be the trigger man but Imogen’s the one who keeps the show on the road.

[Anything you’d like to add, Mr. London Walks guide?]

Yeah, sure. That sobriquet “God’s Assassin” came about because Rufus is in Westminster Abbey twice a week.

I mean, c’mon, why do you think they call him God’s Assassin?

But that’s enough preliminaries. I (me, David, aka Mr. London Walks guide) have been face to face with God’s Assassin. Now it’s your turn. 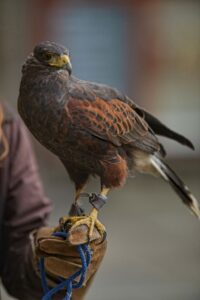 Did you look? Yeah, Rufus is a hawk.

And, sorry. Couldn’t resist overturing him that way, folks.

No more fancy footwork, though.

To be precise, Rufus is a Harris Hawk. His twice-weekly job at the Abbey is to lay down the law – enforced with extreme prejudice if need be – to pigeons. The Abbey roof is off-limits to them.

Rufus and Imogen, his handler, are up on the Abbey roof twice a week. Tending to business.

You could say, I think, that Rufus has a full and varied London life. Rufus takes care of business all over London. Ranging from – no surprise, this – Trafalgar Square to – wait for it – Centre Court and the rest of the All England Lawn Tennis Club at Wimbledon.

Turns out that the Harris Hawk isn’t native to this green and pleasant land. They’re from America. (Geez, these Americans, coming over here and making life miserable for our pigeons.)

The really interesting thing about them is that they’re one of the rare birds who hunt in packs.

That’s why he’s perfect for the job. Teamwork comes naturally to him. And get this – he thinks Imogen is part of his pack. 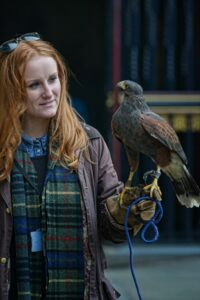 And since Rufus’s eyesight is about eight times sharper, eight times more powerful than the sharpest human eye, well, what gives?

In Imogen’s phrase, “food is the main motivation.” Imogen feeds him – apart from what he catches on the wing. That’s the main way she pulls his jesses (look it up – and while you’re at it look up Shakespeare’s use of the word in Othello).

A steady diet of day-old chicks. Baby quails and baby chickens. And since you’ll be at least as tender-hearted as I am, you’ll be pleased to know, as I was, that the day-olds aren’t alive when Rufus sits down at the lunch counter.

You want to know more, well, go to Imogen’s and Rufus’s website: avianenvironmental.co.uk

Finally, is there a London Walks point anywhere in here? Yes, sure. Stuff like this is what you get from London Walks guides. And the clincher – you’re only going to get it from a top-flight guide. “Summer job guiding” – paint-by-numbers guiding – lowest common denominator guiding – ain’t going to get you there.