Guided by Molly or Simon W.

Meeting point: Just outside Embankment underground station (the Villiers Street exit), London. The London Walks guide is easy to identify. They hold up copies of the distinctive white London Walks leaflet and sport their professional qualification – the famous Blue Badge.

Price: £15 per person (full adult); £10 for full-time students and over 65s; children accompanied by their parent(s) go free

The price covers the guide’s fee. Admission to the National Gallery is free. There is no other charge. (At the end of the tour you are of course more than welcome to help support the National Gallery by becoming a member or getting a gift or book in the NG’s superb gift shop or having something toothsome in one of the Gallery’s ever so civilised cafes.) 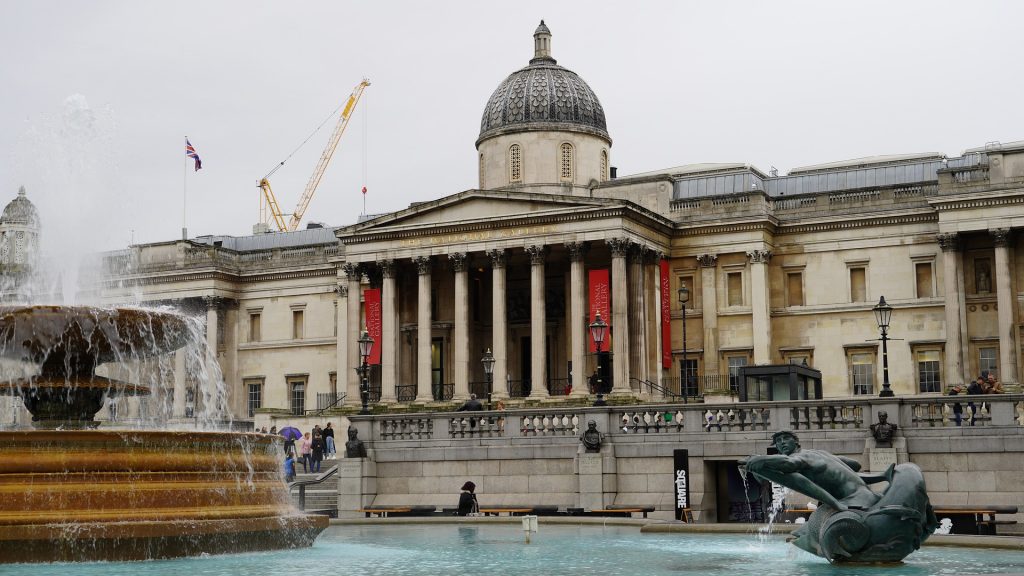 And then we meet the works of art – and the artists – room by room, painting by painting. More than meet them – get to know them really well, spend some quality time with them. Because we see them through the eyes of an expert.

We do it in the way that makes the most sense. We “read” the story from beginning to end. Page one is the centuries-old – 1300-1500 – early Gothic and Renaissance masterpieces in the Sainsbury wing. Our selection varies – ranging over the Wilton Diptych to Piero Della Francesca’s Baptism of Christ to Botticelli’s Venus and Mars to Van Eyck’s Arnolfini Portrait.

We turn the page to High Renaissance & Mannerism (1500-1600). To a selection of paintings ranging from Leonardo da Vinci’s Virgin of the Rocks to Titian’s Bacchus and Ariadne to Hans Holbein’s The Ambassadors.

Overleaf it’s the Baroque Era (1600-1700) we peer into the wondrous depths of the likes of Caravaggio’s The Supper at Emmaus and Claude Lorraine’s Seaport with the Embarkation of the Queen of Sheba and Rubens’ Samson and Delila and Van Dyck’s Charles I.

Page after page of masterpiece after masterpiece because then it’s on to Dutch Realism (1600s). To Rembrandt’s Self Portrait perhaps and/or Jan Vermeer’s Girl with the pearl earring.

Next, it’s the Rococo to Neo-Classicism (1700-1800) treasure trove. It ranges from Canaletto’s Stonemason’s Yard to Hogarth’s Marriage a La Mode to Gainsborough’s Mr and Mrs Andrews to Joseph Wright’s Experiment on a bird in an air pump.

And then? It almost goes without saying: Constable’s The Hay Wain and Turner The Fighting Temeraire.

The penultimate chapter in the story is of course Impressionism (1800-1900). Perhaps Monet’s The Water-Lily Pond or George Seurat’s Bathers. Or both.

And the grand finale, the last page? Vincent Van Gogh and The Post Impressionists (1800-1900).

An outstanding tour of the National Gallery is the world’s greatest art history course.

The Wilton Diptych, for example, in the Sainsbury Gallery. A rare and priceless mediaeval painting, it takes us back over 600 years, takes us into a world that is both strange and uncannily familiar. We “read” it: how the unnamed artist worked, the materials he used, the details, the iconography, the signs. Further along, Jan Van Eyck’s exquisite Arnolfini Portrait. The textures, colours, wondrous treatment of light, Latin inscription, the “things” in the room and what they signify, the couple, their dog, their mysterious guests.… Once seen, never forgotten.

Rembrandt’s Self-portrait made just before his death. Former NG Director Kenneth Clark puts it best: “with the possible exception of Van Gogh, Rembrandt is the only artist who has made the self-portrait a major means of artistic self-expression, and he is absolutely the one who has turned self-portraiture into an autobiography.” Then there’s JMW Turner’s masterpiece, The Fighting Temeraire. Its fighting days over, this is the last journey of the old Trafalgar tall-masted gunship. It’s Britain’s best loved painting. You can see why. Another once seen, never forgotten.

And here’s a further selection of highlights from the National Gallery’s collection (should you, at tour’s end, want to continue the feast). Three dozen art-historian recommendations, shall we say.

Pablo Picasso was the most famous artist of the 20th century. Will we see any paintings by Picasso?

A. There are a couple of Picassos in the National Gallery collection, notably Motherhood (from Picasso’s Blue Period) and Fruit Dish, Bottle and Violin (the Gallery’s only example of Cubism). Unfortunately, these two famous paintings are currently not on display. As soon as they go back on display, yes, you will see some of the work of Pablo Picasso. In the meantime, there are several modernist masterpieces by Picasso’s contemporaries that are currently on display.

How long is National Gallery Tour?

The national gallery tour will take approximately 2 hours, which is plenty of time to find out all about the gallery and some of its most important works.

Is the National Gallery worth visiting?

The National Gallery is one of the world’s most-visited art museums, with an extensive collection of works from across the globe. Visiting the gallery is an education in art history and well worth anyone’s time.

“The guide at the National Gallery (Margaret) gave one of the best art museum tours I’ve ever had”    Stan0101  San Diego, California

“Molly did a fantastic job as the guide for the tour of the National Gallery. Obviously we did not see the over 3,000 pieces in the collection. Instead, our group of 11 got a well constructed, highly knowledgeable look into the history of art and its development over the centuries. Using a well thought out list of key pieces, Molly led us through a wonderful progression of key works. It was definitely two hours well spent and made it so much more meaningful to continue one’s own exploration of this magnificent gallery.”  Redlands CAFoodie   Redlands, California

“The National Gallery tour was terrific. Margaret was an informed, interesting and responsive guide. She selected a range of works to highlight developments of western art from the 13th to the 19th century. This was very well presented. It was thought-provoking, enjoyable and very good value”   Jan S.  TripAdvisor

“We did the London Walks National Gallery tour with Simon W. and it was excellent. Simon was a very personable guide, full of interesting facts and opinions. I am not a big art fan and sometimes galleries simply have too much to look at for me, but he chose about 10 pieces to look at in detail, which mapped the development of Western art over about 700 years, and what he had to say about each piece was fascinating. The atmosphere was informal so we felt we could ask any questions. It was a very interesting and inspiring couple of hours.”  Matt K. Reading, United Kingdom

Peroration (‘rearrange your sense of reality’)

“You’ve been nailed again, eye-popped. Life has just been adjusted,” as the wonderful Simon Schama puts it. In that same vein (SS again): “Great art has dreadful manners. The hushed reverence of the gallery can fool you into believing masterpieces are polite things, visions that soothe, charm and beguile, but actually they are thugs. Merciless and wily, the greatest paintings grab you in a headlock, rough up your composure and then proceed in short order to rearrange your sense of reality.” And on that note – warning? – you are cordially invited to a levée with the likes of Rembrandt, Rubens, Leonardo da Vinci, Van Dyck, Goya, Bosch, Constable, Turner, Claude Monet, Renoir and Van Gogh.A levée in the company of art historians Molly, Simon and Margaret.

There is plenty more to learn about art in London so check out our artistic London tours.

If you can’t make one of the regularly scheduled, just-turn-up, public Mountain Building & Meteorites in the City of London walks it can always be booked as a private tour. If you go private you can have the The National Gallery Guided Tours walk – or any other London Walk – on a day and at a time that suits your convenience. We’ll tailor it to your requirements. Ring Fiona or Noel or Mary on 020 7624 3978 or email us at [email protected] and we’ll set it up and make it happen for you. A private London Walk – they’re good value for an individual or couple and sensational value for a group – makes an ideal group or educational or birthday party or office (team-building) or club outing.

Reserve your place on The National Gallery Guided Tours