Virtual  Shakespeare and the Marlowe Conspiracy

Did Christopher Marlowe write what we know as Shakespeare’s plays? Unlikely …but an interesting theory. 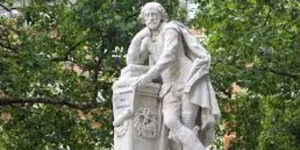 This virtual tour matches the lives of William Shakespeare and Christopher Marlowe and considers the evidence that they were one and the same. They were exact contemporaries, both born 1564. The year 1593 when Marlowe was ‘murdered’ having written half a dozen masterpieces was the same year Shakespeare arrived in London and began his writing career somewhat late at the age of 29. Even Westminster Abbey has a question mark by Marlowe’s memorial. Curious, eh?

Reserve your place on Shakespeare and the Marlowe Conspiracy