30 Of The Best Panoramic Views Of London 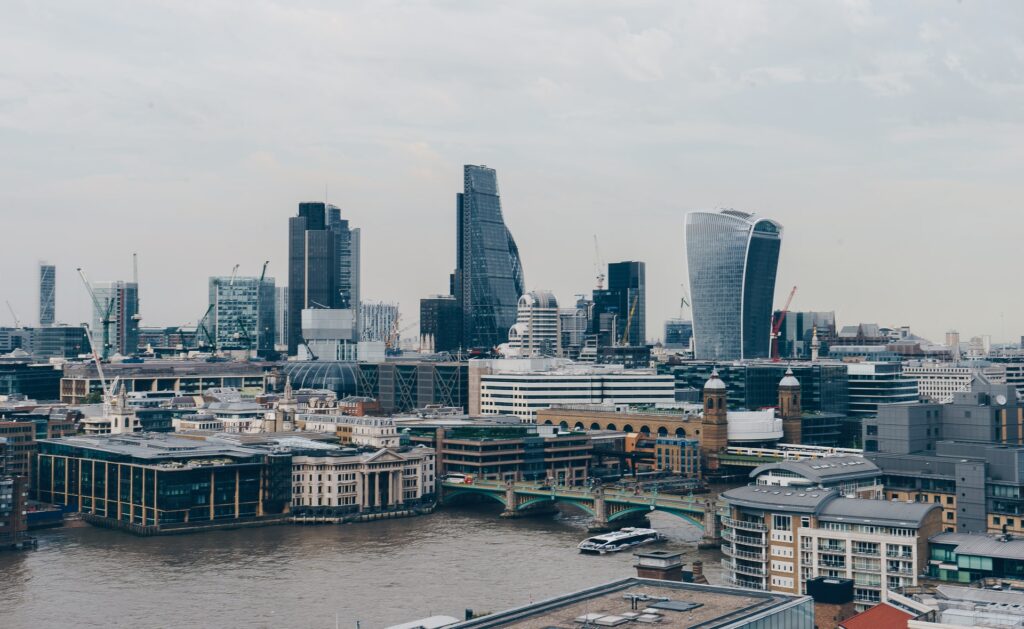 We’re often asked where to get the best views of London, and it’s a tricky one to answer quickly. In this guide, we’ve highlighted the top 30. To help us list the greatest viewpoints of the London skyline, we spoke to two of our most experienced London Walks guides. Fiona really knows her stuff and she’s decorated with the highest accolades a guide can receive. David is Mr London Walks and loves to find those lesser known jewels of the city.

Whether you’re looking for a panoramic view to provide a stunning backdrop on a special occasion or a reward at the end of an uphill walk, we’ve curated London’s best viewpoints – the obscure ones as well as the achingly obvious.

Exquisite dining with a view to match

This is the luxe list. A swanky restaurant with an incredible view of London comes with a hefty price tag. But if you’re after somewhere special to make an impact, these have the wow factor.

Ascend to the 28th floor of the London Hilton Hotel on Park Lane to find award-winning Galvin at Windows restaurant. The 360 degree views of London are jaw-dropping, as are the prices of the food and drinks. There’s also the 10° Bar if you’re after swanky cocktails in lavish surroundings. Look carefully and you can peek into the Buckingham Palace Gardens from your vantage point.

There’s no doubt that the views from The Shard are breathtaking. But so is the price just to step onto the viewing platform. Fiona‘s tip is to spend the money on a delicious afternoon tea halfway up The Shard instead. It’s still expensive, but better value than simply splashing out on a trip to the top.

Why is it called the OXO tower? Look up! You’ll see the so-called pattern of the letters in the design of the windows. Situated on the South Bank, the OXO tower has beautiful restaurants overlooking the river and onto Westminster.

The old NatWest tower is the fifth tallest building in the City. City Social, Jason Atherton’s Michelin-star restaurant offers modern fine dining. But you’re spoiled for choice in Tower 42. There’s also SushiSamba and the Duck and Waffle on offer. All of which boast exquisite food and amazing views of the City of London.

Continuing the theme of venues in the sky, these are some of London’s best bars with panoramic views of the city.

5. The Rooftop at the Hilton Trafalgar Square

This rooftop bar is a real find in the West End. It’s an al fresco spot on the seventh floor, overlooking the majestic London skyline. Bookings are encouraged, and the prices soar at weekends. David’s tip is to visit on a weeknight.

If you’re after spectacular views over the Tower of London, Tower Bridge, The Shard and HMS Belfast then CloudM is the place to head. It’s the Citizen M hotel bar. Located above Tower Hill underground, you’ll drink in views of Tower Hill, the City, the river and across to the South Bank. It’s open afternoons and evenings for a great bit of people-spotting in a stunning setting.

It’s not all about skyscrapers and impressive hotels. London is steeped in history and some of its centuries-old buildings provide brilliant platforms for panoramic views.

It’s a 17th century skyscraper in the heart of the City. Can you climb The Monument? Yes! Those 311 steps provide a bit of a workout, but the 360 degree views from the top make a great pay-off. Given the structure’s age, it’s not accessible for all.

The dome of St Paul’s is such an icon of the London skyline. And you can actually climb up to that dome. The Stone and Golden galleries provide amazing vantage points for views across London.

Not to be confused with the better-known Westminster Abbey, the Roman Catholic Westminster Cathedral can be found near Victoria station. Take the lift up St Edmund’s Tower and marvel at incredible views of the Houses of Parliament, Big Ben and Westminster Abbey. This one’s a hidden gem that’s not really hidden at all.

You may have marvelled at this magnificent bridge from the riverside, but have you been to the top of it? It’s a strange feeling to be so high above the Thames, and stepping onto the glass floor can leave you a little queasy. But if you’re brave enough, it’s quite the experience.

Now, this one is truly unusual. It’s an old, test lighthouse on the banks of the Thames in Canning Town, East London. It was used for training and development in the 19th century. Renowned scientist Michael Faraday worked there in the 1840s. Nowadays, you can climb the lighthouse and stand where the lamp would be. From there you can see for miles. Open weekends only.

It may not be centuries old, but it does feel like you’re stepping back in time when you enter the India Club. The club has a rich history and it feels such a privilege to be there. You don’t get big views from there because it’s not very high, but the view you do get is wonderful. Look out over Aldwych and the Strand whilst indulging in great Indian food. Alas, its days might be numbered and it should definitely be visited.

Views of London with a side-serve of culture

Some of London’s wonderful arts venues are situated in prime-viewing locations. So get a dose of culture alongside a sensational panoramic sight of the surrounding area.

The viewing terrace at the top of the Blavatnik Building is closed currently. However, if you head to the top rooms of Turbine Hall you will capture amazing views across the Thames to the north bank.

Arguably Peckham’s finest venue. Wind your way up the pink, spiral staircase to the rooftop bar. Then, draw breath as you take in those incredible, panoramic London vistas. The cool and interesting gallery below is worth a visit too.

The balconies at the top of this South Bank theatre provide lovely views over the Thames and beyond.

The members area on the upper level of the Royal Festival Hall is a fabulous find. If you live in London, it’s worth paying the fairly modest £69 annual fee for access to the seating area, the bar, the wifi and especially the view out over the Thames and to Charing Cross.

The gardens at the Horniman in Forest Hill are quite spectacular. The bandstand is the spot to head with a picnic (or a warm cuppa) and stop to admire the awesome views across London.

Views on the move

This is a mix of the unusual and famous tourist destinations. But they all involve some sort of transport and movement.

We almost didn’t include this one because we don’t want everyone to know about David’s little secret place for outstanding views. But we couldn’t do that to you! The Pullman in St Pancras is often overshadowed by other hotels. But there’s one major reason to go there, and that’s the view from the 16th floor.

After you’ve had a drink in the ground floor bar, ask the Concierge very nicely if you can take the lift up. Make sure to take the middle lift as it has a fourth wall which is a window. On your ascent, soak up the southerly view looking towards the London Eye.

Once at the top, take a seat in the pilot’s seat (literally) and stop to absorb the easterly view. You’ll see the British Library and nearby hotels, and away to the City, Docklands and East London. It’s simply stunning, and oh so quiet.

It may not be as high as a skyscraper, but the top deck of a London bus is a wonderful way to see the city. Tap your Oyster card and soak up the sights. The front row seat is the one to grab if you can. That’s where you get the best view.

It’s an incredibly obvious destination, but the London Eye is an undeniably great way to see London from above.

Similarly, the Emirates Airlines cable car is another tourist destination. But it’s a relatively cheap way to travel to and from the Royal Docks. Simply swipe your Oyster card and enjoy the 20 minute journey which allows you to view the City from the sky.

Combining daredevil activity with sightseeing, the climb up and over the former Millenium Dome is just spectacular. Take in a panoramic view of historic Greenwich, the Olympic Park and Canary Wharf from the roof of building.

There are a few places in the city where you can press pause, enjoy your surroundings and look out over the hustle and bustle below. These garden terraces are wonderful finds.

A relative newcomer to the City, 120 Fenchurch Street offers something rather different – a stunning garden terrace. Head to the rooftop and enjoy the gorgeous planting in The Garden, seemingly miles away from the buzz of Leadenhall Market down below. You can walk around the perimeter of the building and take in the vistas in different directions. It’s accessible to anyone on a first come, first served basis. That said, it’s closed temporarily just now.

The Walkie Talkie is such a distinctive building as it towers over the City. Inside, you’ll find the Sky Garden, branded London’s highest public garden. Entrance is free, but it does get busy. It’s best to book 2-3 weeks ahead. If you’re going to chance it, then mornings tend to be quieter. That said, this place is pretty special at sunset.

The lift up to the platform on One New Change is an absolute thrill. It’s not the highest vantage spot as it’s only six floors up. However, you’ll get an incredible, wide view of St Paul’s with no restrictions. It’s another great spot for sunsets. And if you’re after something a little different, book into a yoga class that you’re sure to remember. Imagine spying St Paul’s from your downward dog position.

At the other end of the spectrum from the eye-wateringly expensive hotel bar is the natural, outdoor vantage point. Finding a spectacular view is such a reward after clambering up a hill. Best of all, these spots are all free to access too.

Our Hampstead aficionado, David describes this as a “special, special place.” From the Skybox on Hampstead Heath, all of London is spread before you. On a clear day you can see all the way down to the Thames estuary and the pencil-like towers of Dartford bridge in Kent. Before that, you’ll see the Docklands, the Gherkin and the Emirates stadium. Located down a path near the top of Spaniards Road, the Skybox is a high point in London and of any Hampstead walk.

This 98 metre high hill is the best place to see in the New Year (in David’s humble opinion). It’s the highest point in London and, as such, is an amazing natural vantage point. It’s set in the south-east corner of Hampstead Heath and it’s a must-visit panoramic spot.

Walking to the summit of Primrose Hill is highly recommended. It’s a gorgeous, green viewing platform over central London. It’s set at the north of Regents Park, but it feels so much further away from the hurly-burly than that.

This beautiful, high bridge is relatively unknown. It’s such a lovely spot to look back across London.

From the high spot of Greenwich park near the London Observatory, you can look over to Canary Wharf, the River Thames and beyond into the City. This is a great way to end our historic Greenwich walk.