The 11 ghosts of the London Underground 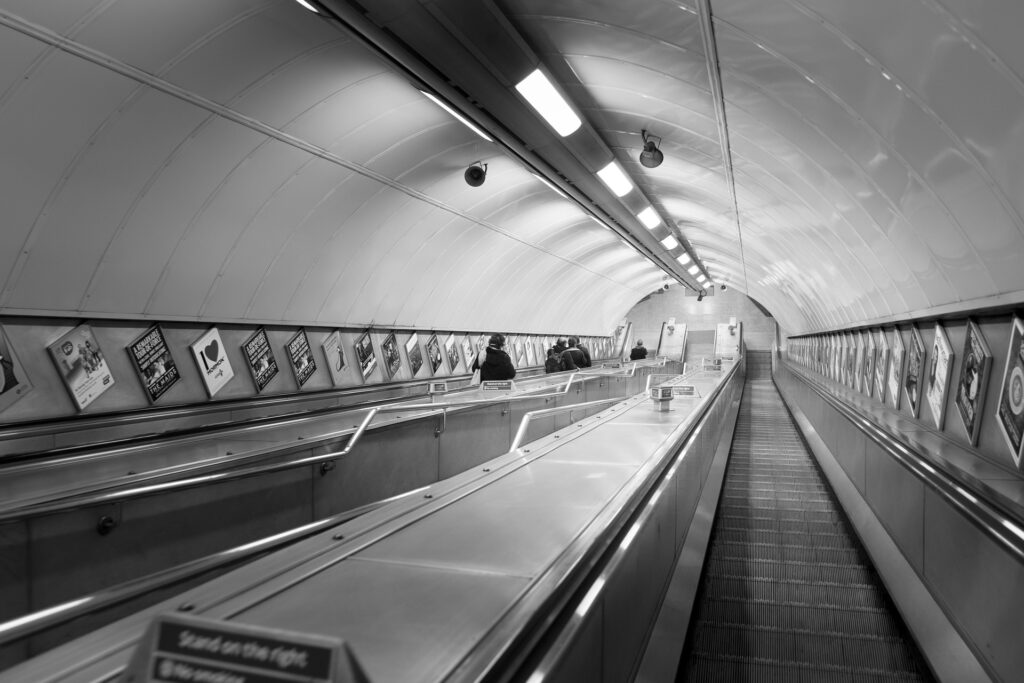 London Underground by, Didiwo, via Pixabay

Deep beneath the city of London is a fascinating world of eerie tunnels and endless passages. Built in the Victorian era in a city that is over 2000 years old, a backdrop for devastation and destruction during the Blitz, it’s little wonder that the London Underground is said to be awash with ghosts. Delianne Forget, member of The Ghost Club, the oldest organisation in the world devoted to psychical research, and famed London Walks guide, tells us the ghost stories of the haunted London Underground.

The ghosts of London’s Underground

In ancient times, the City of London had 109 churches, each with its own burial ground where victims of gruesome diseases like the Black Death were laid to rest. Bank Station, in the heart of London’s financial district, was built right in the middle of the graves of two such churches. The nearby Bank of England was built on the site of St Christopher-le-Stocks Church, with the graveyard of the church becoming the Bank’s garden court. Of all the lost souls that prowl Bank though, it is the ghost of Sarah Whitehead, or The Black Nun, that is best known. Sarah’s brother, a clerk at the Bank of England, was hung for embezzling money. Yet, even after his death, Sarah would return to the bank, searching for her brother.

2. The ghost of the Kennington Loop

Notorious for ghostly sightings is the infamous Kennington Loop, on the Northern Line. The train empties of passengers at Kennington, ready for the train to perform a loop. Devoid of passengers, the carriages are clear, yet drivers report hearing the slamming of carriage doors right through the train. Legend has it that a man, possibly a London Underground station worker, was electrocuted on the tracks in the 1950s. If, like Delianne, you happen to miss your stop on your way home one evening, you too could end up on the Kennington Loop but be warned, this is one section of the Underground that even drivers refuse to ride.

A gruesome tale is that of the actor William Terris, who was stabbed to death by a disgruntled actor outside the Adelphi Theatre, close to Covent Garden. A renowned actor in the 19th century, Terris had his own private entrance to the Adelphi, enjoyed great success and was a frequent visitor at the Covent Garden Bakery. However, his friend and fellow actor, Richard Archer Prince, was less successful and became an alcoholic. Terris gave Prince acting parts and recommended him to the Actors’ Benevolent Fund, but on the 16th December 1897, Prince slaughtered his so-called friend outside the Adelphi. When the bakery in Covent Garden was knocked down to make way for the Covent Garden Underground Station, the ghost of Terris followed. Since then, commuters and Underground workers alike report seeing this most debonair of ghosts, often with opera cape and gloves.

4. The girl on the train

Of all the ghost sightings on the London Underground, the one that really creeps the drivers out, according to Delianne, is the ‘girl on the train’. As the train approaches Elephant and Castle on the Bakerloo Line, drivers report seeing a young woman getting on the train. But they never see her again. What they hear though, are running footsteps, tapping noises and the slamming of doors. Is it the infamous infrasound that the London Underground is known for, emitting sound below the range of human hearing and believed to cause all manner of unpleasant effects on the human body, from disorientation to nausea, or is it the girl on the train?

5. The children of the WW2 bombings

It was into the depths of the Underground that Londoners sought refuge during World War 2. Bethnal Green on the Central Line is one of the deepest of the tube stations, and it was here that people flocked when they heard the roars of the sirens in 1943, accompanied by gun fire. In the panic to reach the safety of the air raid shelter, and as more people poured onto the narrow stairs, those at the bottom of the stairs were crushed and suffocated, including many women and children. Devastatingly, the sirens were part of a practice raid, not a real raid, so this disaster could have been avoided and 173 lives saved. Some say the wails of the victims can still be heard today.

The ghost of Amen Ra is believed to be that of a cursed mummy put into the British Museum. Like Aldwych Station (formerly known as Strand), British Museum Station is what’s known as a ‘ghost station’- still there but disused. British Museum Station was closed in 1933 when nearby Holborn Station opened. Rumour has it that a secret tunnel linked British Museum Station to the Egyptian Room of the Museum itself, giving Amen Ra, furious at being unearthed, a means to vent her rage. Those who have witnessed the screaming spectre of Amen Ra report seeing an Egyptian princess, adorned with a magnificent headdress, walking the platforms of Covent Garden and Holborn.

On the 18th December 1987, tragedy struck at King’s Cross when a fire started under an escalator. The fire quickly spread and 31 people died with many more injured. The ghost of an inconsolable young woman, reaching out for help, has since been seen at King’s Cross.

8. A worker in white overalls

Built on an ancient burial ground, Liverpool Street Station is one of the most haunted of the London tube stations, and is also said to be plagued by a worker in white overalls. This ghostly apparition appears at the station as if on his way to work, wearing his overalls and carrying his box of tools. When Liverpool Street was being updated in 2000, the worker in white overalls was apparently captured on CCTV, yet when Underground staff went to find him, he had vanished into thin air.

9. The man in the peaked cap

One of the spookiest things about the London Underground is that there are hidden tunnels and passages that the public know nothing about, disused, but still there. One such hidden tunnel can be found at South Kensington on the Piccadilly Line, built to house a new section of line but later abandoned. And it is at South Kensington that a man wearing a peaked cap is seen clinging onto the side of a steam train coming into the station to the sound of a loud whistle, before disappearing into the tunnel. Highgate, scene of the abandoned Northern Line extension project, is also said to be plagued by sounds of non-existent trains.

The 18th century was a grim time to be in London, especially for the poor. Anne Naylor, a 13 year old orphan, was apprenticed to hat maker Sarah Metyard and her daughter Sally. Treated appallingly, Anne was starved, beaten and eventually murdered by Metyard before being dumped at Chick Lane. It was here that Farringdon Station was later built. Over the years, many have reportedly heard the screams of a young girl at Farringdon.

11. The old woman of Aldgate

Aldgate Station is believed to sit on the site of a plague pit, a mass burial ground of over 1000 bodies which were found when they built the station in the 19th century. Some say they had uncovered the final resting place of those that succumbed to the bubonic plague that swept through London in the 1665, dying a horrible death and left in a putrefying hole. But the ghost that haunts Aldgate is said to be from later in history, a woman that fell onto the tracks when sheltering in the Underground during World War 2.

With too many ghostly sightings to be ignored, and a veil of secrecy snaking through its tunnels and passages, the London Underground is one of the most haunted places in London. To discover more of London’s ghost secrets, check out these tours with London Walks.