This is why you go on walking tours (well, it’s one reason, a helluva good reason) 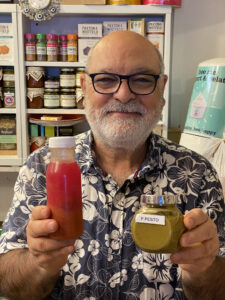 No need to beat around the bush with this one. Finding out about Tania’s Cafe is worth the price of admission of the Hampstead walk all by itself. And “finding out” is very much to the point. Guarantee you you almost certainly won’t find it off your own bat. It’s maybe London’s most hidden cafe. It’s down a secret alleyway. You go past a tiny little Piaggio van – you couldn’t get a normal size vehicle in the passageway but that little van does fit, just. And of course the vehicle itself is a bit of Hampstead culinary history because it was out of that little van that Ghassan started his business. As he tells us in the interview, his stock in trade was coffee and waffles. Well, just past the van is the not much larger “unit” that he operates out of today. It’s also doll’s house size. There’s a counter inside where two people can sit and there are two very small tables out front. I know Ghassan very well and indeed I know his delightful son Mohammed who helps out from time to time. Ghassan’s place is often my port of call after I finish my Sunday morning Hampstead walk. And what a reward. The speciality – well, one of the specialities – is the spinach triangles his wife makes. Yes, I know – spinach triangles – how could spinach triangles be anything special, you might well ask. I mean after all, it’s just spinach in that unleavened Middle Eastern bread – the kind of comestible that’s ubiquitous in Middle Eastern cafes and delis. and cafes. And for sure, as foodstuffs go they’re pretty ho-hum in those places. In those establishments they taste like, well, like spinach. Spinach with cardboard. 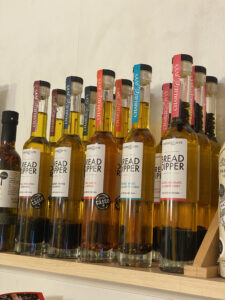 At Ghassan’s, though, they’re – well, it’s like the difference beteween a £400 bottle of wine and a bottle of Blue Nun. The flavour is fresh, complex, delicious. Sensational, really. It’s a moving target. It just keeps coming – and indeed altering on your palette. I’ve never had anything like it. There’s citrus with other, subtler, more complex flavours peeking out behind the citrus. I’m sure someone who knows more about these matters would be nodding sagely were I to run the flavour chromatic scale – the ingredients – past them. Ok, if you insist, i.e., for anyone who is one of those culinary whiz kids, the flavouring ingredients are: lemon juice, summac, cumin, rosemary and zaatar. But look, don’t just look, try it. One bite and you’ll get it.

And the rest, well, the whole establishment is like a culinary Aladdin’s cave. Everything is delicious and everything is special. And visually appealing, the bottles, the packaging. Some of it not to be had anywhere else in London. How cool is is that? And the whole time you’re getting a steer from someone who loves his wares and knows what he’s talking about. For example, if you ask Ghassan about his “bread dips” – about eight different flavours – he’ll counsel you to only ever serve same with white bread. Brown bread, wholemeal, etc. “drains away” the flavour. That’s the kind of expert advice, the nous, you’re never going to get from a “shop floor worker”, a “hired hand” in a supermarket.

Dare I say it, it’s absolutely akin to walking tours. It’s local knowledge – it makes a world of difference.

And as for that “Miracle Juice” of his – well, as Ghassan says, it’s made of ten fruits and six vegetables. A bottle of Miracle Juice to accompany a couple of Spinach Triangles – well, it’s taste buds bliss. 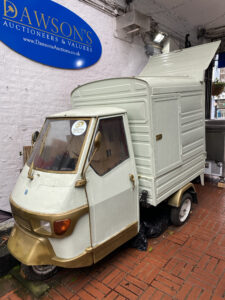