The poet, the swans, the sorrow, the beauty… In Hampstead

Hampstead. The pond in the woods. Two white swans. The poet. The loss. The grief. The remembering. The beauty. The transfiguring. David takes you there.

This is the London Walks Daily Podcast for August 17th 2020.

The stop just before our visit to the Vale of Health is what I call The Roof of London. That walk goes to five “viewing platforms”, as I call them. From those viewing platforms you can see all the way across the Thames River Valley. You can see the southeastern rim of the “bowl of hills” that London nestles in. That southeastern rim is 26 miles in the distance. Beyond that is the Weald of Kent. Ten miles beyond that is the sea. And of course in the nearer – well, by nearer I mean to five to ten or twelve miles away – distance is the full London panorama, all of it spread out before us. To use the American term, standing there we’re in London’s “Skybox”. It’s the most wonderful vantage point.

Anyway from there we walk down across Hampstead Heath to and into that tiny little village within a village, the Vale of Health. We make a couple of stops in the Vale of Health – it’s very pretty and full of interest. And then we head up out of the Vale of Health. But partway up the hill that takes us up and out of the Vale of Health we take a little detour. We go for a walk in the woods. A walk in the woods that takes us to Vale of Health Pond. I think that stop – there in the woods – looking out over that pond – I call it, very American of me, this, London’s Walden Pond – I think that stop is my favourite stop on the whole walk. And that’s really saying something. Because every single stop on that walk is special. Extra special. But I like it so much that I photograph it every Sunday morning. I want a record of Mother Nature’s doings, week by week. How age cannot wither her, nor custom stale her infinite variety.

My walkers always have wonder written all over their face when we get to that little clearing in the woods, looking out over the pond. And I always ask them, “how bucolic do you want your London?” You’re only four miles from central London. And then I say something like, “I write the London Walks leaflet. And the website. And if you read the blurb for this walk, in the penultimate sentence I speak of a pond with two white swans on it. And this is the pond. And those two were so reliable that I could confidently put that sentence in there. Because we’d see them every week.

They were going to have a family. There was a nest. Eggs in it. One day a dog came too close to the nest. The male swan, the cob, went for the dog. There was a terrific fight. The male swan lost the fight. He lost his life. The dog killed him. And then, a week or two later, a fox got the eggs in the nest. The pen – the female swan – I could hardly bear to think about her. She lost her mate, her husband. And then she lost the chicks that they were going to have together. I used to see her by herself, moving across the pond. And I’d weep. At least inwardly. I remember telling the tale one Sunday morning to my walkers and there was a lady on the walk who was almost overcome with sadness. And she blurted out, “oh, the poor thing, she must be desperately lonely. Somebody should call the RSPB – the Royal Society for the Protection of Birds – and tell them about her, get them to bring her a new partner. And somebody in the group who knew better, piped up and said, “no, that wouldn’t be a good idea at all. If you brought her a male swan that would be a dead male swan within a week. She’ll be perfectly capable of getting her own mate. And she’ll do it in her own good time.”

And that brings me to Danny Abse. Danny Abse was Welsh. And Jewish. He was a doctor. And a poet. He died in 2014. He was 91. He lived in Hampstead for many years. In 2005 Danny and his wife Joan were driving home from a poetry reading. Another car smashed into their car. Joan was killed.

For a year after her death, Dannie Abse kept a diary.  The diary is a living record of loss. Of loneliness. Of grief. And it’s a looking back. A reflection on the past. It ends with his poem Lachrymae. That title – Lachrymae – is a Latin word that means tears. Or dirge. From the sap or gum that certain trees exuded. The trees were, well, weeping. It’s the most perfect, the most beautiful, the most moving poem. I’ve memorised it. I give it to my walkers, there in that little clearing in the woods, looking out over the pond, the pond where the swans were. And then just the one swan. The widow. And remember that Dannie Abse lived in Hampstead. He will have known the story. The poem is about the swans. And about Dannie Abse and his wife. About loss and beauty and love and life. It goes like this:

‘She is everywhere and nowhere

now that I am less than one…

where a lone swan sings 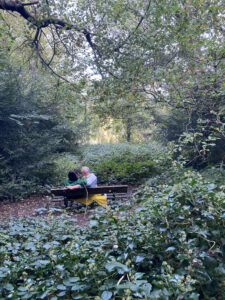