They never wanted the view of Trafalgar Square ruined by a column to Nelson– but parliament couldn’t stop it being built. They did want Edith Cavell, the World War 1 nurse, to be seen as a martyr dying ‘For King and Country’ as her statue proclaims. But that wasn’t her – as her friends made clear. Then there’s the statue that parliament thought they had melted down – only for it to reappear. Do we even notice these monuments that have caused such controversy? So, come and find out more. What about the sculptor who got so fed up with his design being interfered with that he ended up sculpting a horse urinating? And who’d have thought a conversation with Oscar Wilde could still cause discord? Meanwhile, still standing serenely, are a couple of generals at least one of whom might be glad to have lived in an era before war crimes tribunals. All this and more is in the very epicentre of the city – the seat of power – in and around Trafalgar Square. 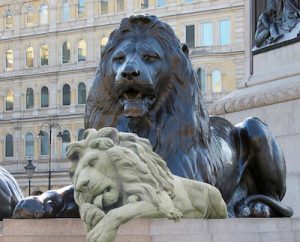 Reserve your place on Whitehall Affray – Statues of Discord