HALF A MILLION YEARS OF LONDON IN JUST UNDER AN HOUR

Kicking off this virtual tour season we go back… way back.

London is one of the oldest cities in the world. Its story, however, starts a long time before the city’s foundation by the Romans 2000 years ago. Find out what it would have been like to wander amongst the elephants in Trafalgar Square and the mammoths at Kings Cross.

Discover prehistoric London. Was it really founded by a Trojan prince? Is it really named after King Lud (and who on earth was he anyway)?

We will also explore the streets of the largest Roman city north of the Alps. A grand city named Londinium. Ravaged by a warrior queen, rebuilt to welcome a god-like Emperor. Remnants of Roman London can still be found all around us today, sometimes in the most unlikely places.

Half a million years of London. In a little under an hour.

This is part of The Story of London. You can buy this single virtual tour but it is much cheaper to get the whole series. 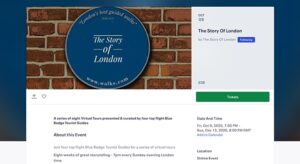 Reserve your place on The Story of London – Beginnings (Episode 1)