Following on from our sold-out The Story of London series, we move into the 20th Century. 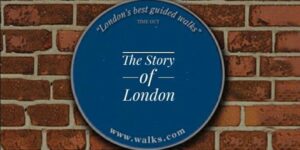 Sit back, watch and listen as we take you from Edwardian Empire capital, through triumph, slump, destruction and rebirth.

Suffragettes, building boom, Bright Young Things, mass transport, General Strike, London at war, post-war austerity and the arrival of the teenager, Swinging London, economic strife, Thatcherism, Cool Britannia, gentrification and the London of the future. We have some amazing stories to tell.

Season membership for all 8 walks for just £36. Scroll down for more details

Don’t worry if you miss a  Thursday  or two, with membership you can enjoy these virtual tours right up to the end of March 2021. 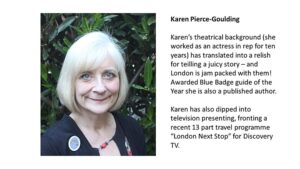 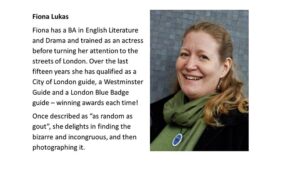 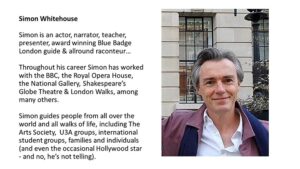 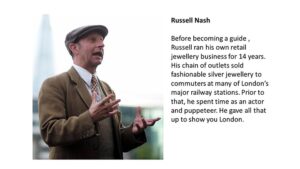 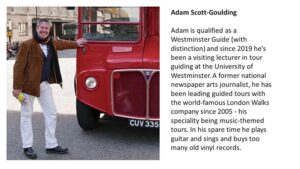 London Walks is “the premier urban walking tour company in the entire world.” It’s the gold standard of this profession, this craft. We’ve been walking for over 50 years and pre-covid had a programme of over 100 walks each week, guided by award-winning guides and professional experts. Over this summer we’ve gone online, with 5-star virtual tours for individuals and groups around the world. We now have over 200 virtual tours on offer. Find out more at www.walks.com 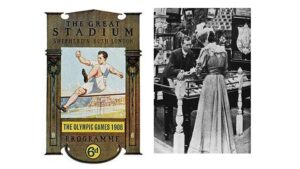 Welcome to the dawn of the 20th-century as London basks in the last Indian summer days of the British Empire. Often remembered as a golden age, the Edwardian city hosts its first Olympic Games in 1908 with such finesse that it leads to the rebirth of the Olympic Movement.

Automobiles and aeroplanes arrive. Selfridges and Harrods Department Store offer a dazzling array or retail delights and the Suffragette movement embraces its cause with renewed vigour

But as London grapples with all this muscular modernity there’s a preoccupation with lost youth and innocence… Peter Pan and his idyllic Never Neverland are inspired by Kensington Gardens and as the first decade draws to a close the shadow of ‘the war to end all wars’ looms.

Guided by Fiona.  Want to hear her, sample the tour? Click here.

London in the 20s was London at her most glamorous.

Cocktails, short skirts and cigarette holders, may have represented new freedoms and opportunities for women. But the gaiety of the Flapper girls belied the fact that they outnumbered the men. The great war-scarred London physically and mentally. In the aftermath we commemorated our losses and lived for the moment. Earlier battles came to fruition with votes for women and workers.

While new Art Deco buildings were eye-catching, architectural sleights of hand were replacing Georgian buildings with Neo-Georgian. And Neoclassical was top choice for institutions demonstrating their stability and good sense. In the heart of the financial City the greatest act of architectural vandalism of the 20th century was perpetrated.

The growth of cinema was changing the way Londoners were entertained, and film studios proliferated. Noel Coward drew audiences to the theatres and Tutankhamun drew crowds to the British Museum.

Private companies were pulled together to create London Transport. Just one part of the essential infrastructure rationalisations of the era. Tube lines shot out into the countryside creating new suburbs. London would double in size between the wars.

Imagine a time when people were made to wear masks & the government issued confusing slogans & mixed messages & the majority of theatres were closed! London 2020? No! This is London in World War 2! In this episode we focus on the impact of World War 2 on Londoners. Inevitably we’ll be discussing the Blitz & the nightly devastation it wrought but we’ll also explore the everyday experience of Londoners including how they prepared for war, how they kept themselves entertained & amused. We look at London’s luxury hotels & ‘how the other half lived’. As peace is declared in 1945, we see how London begins to recover with the ‘birth’ of a public health system& hope for a new Jerusalem’…..and as ever we’ll discover the places, buildings & monuments that show us the legacy of wartime London… 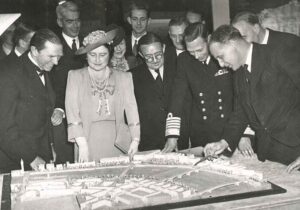 World War II left London battered and bruised. Economic hardship meant that rationing and austerity continued for many years. There were highpoints though. A royal wedding in 1947, The Festival of Britain in 1951 and a glorious Coronation in 1953. The air was cleaner due to pollution regulation and Londoners no longer had to worry about unaffordable healthcare with the arrival in 1948 of the National Health Service. Wren’s city churches were restored to their former glories and grand plans were made to rebuild the city. Class and social barriers started to loosen. Look Back in Anger shook the theatre world up, the satire boom took hold and capital punishment was abolished. West Indians arrived on the Empire Windrush and rock and roll was born in Soho. 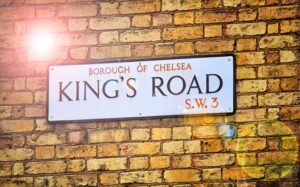 East End gangsters rub shoulders (and more) with peers of the realm; in Soho they’re sloshing Coca Cola into perfectly good Scotch; they’re dropping their T’s at the BBC while pillars of the establishment are dropping their trousers in Marylebone mews flats.

In Chelsea, boys’ hair is long, girls’ skirts are short and to be “Far Out” is to be “In”.

The old emblems of Empire and conquest can be acquired and worn for a couple of bob at World’s End. And presiding over it all a portly little socialist from the provinces. 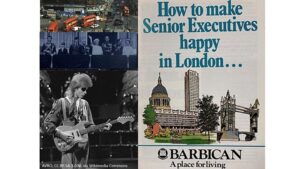 The white heat of 60s revolution dimmed to an ember, undermined by rising world fuel prices, industrial disputes and stagflation. The three-day week heralded a decade of economic uncertainty. And the “sick man of Europe” joined the Common Market.

Throughout the decade the NatWest Tower slowly grew upwards. We built up, and we built brutal. But we decided not to construct a grid of motorways through central London. Choosing instead to protect and conserve some of our older buildings. The London docks moved down river, leaving dereliction behind, a backdrop for gritty police dramas and films.

The glitter of glam-rock and disco appeared alongside the skinheads and punks. Movements like Feminism struggled to change the status quo. Events around the world bought new waves of immigrants, and with them new foods like the Kebab. In Notting Hill the Carnival blossomed, becoming also a focus for tensions between communities, police and political groups.

In 1977 many street parties were held amongst the events to celebrate the Queen’s Silver Jubilee, and two years late the new tube Jubilee line was opened.

Meet your guide (and some of your fellow walkers). The 1980s was Simon W.’s row to hoe. He had a delightful surprise for us right at the end – I’ve chosen this bit clip so you can hear that surprise. And the extract then concludes with a little bit of the Q & A. What’s so charming about it is it’s clear that this team of wonderful guides and – also part of the team – their walkers – well, everything’s gelled. They’ve been together now every Sunday evening for several weeks. A community has been created. There’s a real sense of fellowship. Friendships have formed. The extract, coming at the end of the formal presentation, goes off-piste, as it were – into that very agreeable territory.

For the first time since the war, London witnesses a social & political revolution. The election of Margaret Thatcher in 1979 ushers in an extraordinary decade where we witness a ‘big Bang’ in the City, the final death knell of the London docks & the beginnings of regeneration in the East End. We see the modern City skyline emerge for the first time & the rise of ‘starkitecture’.

We visit Soho & enjoy the emergence of a new music scene in the form of the’ New Romantics’. Speaking of which we relive a fairytale royal wedding at St Paul’s.

We also explore a couple of lesser-known London neighbourhoods including multicultural Brixton & how on one hand many Londoners found themselves homeowners while thousands have no home at all. 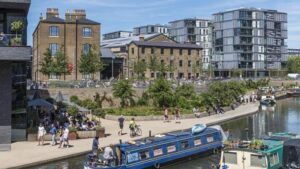 Episode 8 – The Nineties and Beyond

The nineties started with the Poll Tax Riots and the end of Margaret Thatcher’s career. The derelict warehouses of Kings Cross were the home to illegal raves and prostitution. By the turn of the Millennium, London was on the up. The tube system was being upgraded after years of neglect. Canary Wharf had transformed the old dock area into a new, bustling, finance centre. Cool Britannia ruled the cultural waves around the world. The art world was shocked and awed by the YBA movement coming out of Goldsmiths College. Hundreds of thousands of arrivals from former Soviet countries made their lives in the capital. Regeneration, gentrification and rebirth took hold and London held its 3rd Olympic games. Kings Cross is now an exemplar of a district remade. The City skyline was transformed, overseen by London’s first-ever executive mayor. What does the future hold for London?