An exploration of what happened following the Roman Period. How did a Celtic speaking Latin educated Roman City become, first deserted, then recovered to become the leading City in a germanic speaking Kingdom?

The Romans gave the name of Saxons to the barbarian pirates that plagued the North Sea region in the Late Roman Period. Historians link them with the Angles and Jutes who, according to the Venerable Bede, conquered the Roman Province of Britannia and turned it into England. London became its leading town.

But excavation and DNA analysis make the traditional story more difficult to sustain and although the Anglo-Saxons have a rich history how much of it can be trusted?  Was there a Dark Age? Or was it just a ‘transition’ from Roman to English?  How did English become the main language, sweeping aside native Celtic and Latin languages?  Much of the story of Saxon London has been founded on myth and dubious historical sources, but archaeological, documentary and genetic research are, perhaps, beginning to provide a clearer narrative. 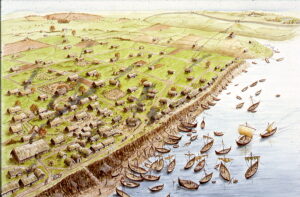 Following the fall of Roman Britain, London was almost deserted. On this tour we explore how London recovered and grew to be the most important City in England by 1066. We begin our tour in the heart of the City, at Bank, and walk through the City to St Pauls, Then along Fleet Street and the Strand to Covent Garden.