Virtual  Statues with Props (or big hair or glasses)

Discovering the London statues that have mad hair, wild sideburns, sitting on benches and holding books, buildings or banners.

Join Fiona to track down the distinctive statues of London. This time it’s not about the life they lived, it’s about the sideburns they are sporting for eternity. It’s the mutton chops that make them memorable.

This is a virtual tour on Zoom. The meeting link and any other details will be sent to you when you book. It’ll include such delights as: 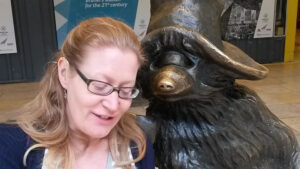 Fiona loves a statue that you can sit next to, interact with, have a chat. Around London we have several that rest on benches, one looming out of something remarkably like a coffin, and this, where Paddington bear peers over your shoulder, to see what you are looking at. 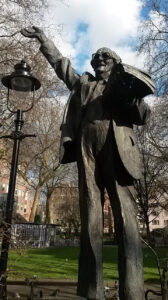 Not only does Fenner Brockway wear glasses. He is also carrying a pile of books or paperwork. And waving as if he is delighted to see us. As we are him.

He’s not the politest statue in London, nor the untidiest – both of whom we’ll meet on the tour, but he is one of my favourites. And he shares a London statue distinction with George Peabody (sitting in a chair), Nelson Mandela (twice), Queen Anne and both Michaels Bond and Caine. 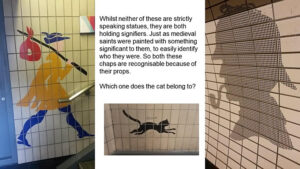 We’ll look at folks whose props are a clue. Whether it’s books they’ve written or equipment they carry. And strangely it’s often statues of ladies who hold stuff, as if without it, we wouldn’t know who they were.

Or maybe it’s because most depictions of women are still generic. Representing a Virtue, a Continent or London herself. Often a clutching a globe or a cornucopia, sometimes accompanied by an geographically appropriate animal. One of these many ladies is an art deco stunner. She stands atop the Old Bailey with her scales and sword of Justice. Less well known, and far more worrying, is the Recording Angel, shrouded, holding pen and parchment to keep note of those who pass her door. 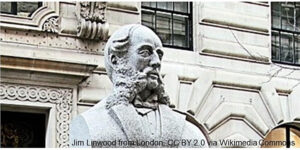 So much hair! From the billowing locks to the bouffant, and from handlebar ‘tache to sideburns, there’s a hair style out there from many an era. In this category it’s the men taking centre stage, and many of them are Victorian. When a fine pair of mutton chops was the last word in dependable respectability.

Fiona may talk about the lives of the people depicted. We may ponder on the choice of who to depict. Mainly we’ll celebrate the individuality of the statues themselves, be it hair, pose or props. This is a mixed bag of many people. All of them Londoners. All of them worth celebrating. Why not?