Virtual  Slavery in the City

A story showing people at their worst and best, tells the horrors of the slave trade, the extreme cruelties and yet contains seeds of hope 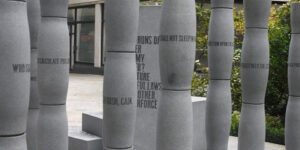 In 1787, in London, twelve men formed the Society for the Abolition of the Slave Trade, motivated by empathy, sympathy and compassion for their fellow human beings.

This tour is about members of that society, the struggles they faced and the methods they used to reach their goal. It is also about the horrors of this evil trade, and the legacies it has left.

Investment in the trade was widespread. In novels of the period you’ll find references to slavery and to wealth: think of the Bingleys in Pride and Prejudice, or the first Mrs Rochester in Jane Eyre. Ordinary men and women clubbed together to buy slaves as an investment, not unlike people who bought shares in BT when it was privatised. Institutions including Oxford and Cambridge universities, and the Church England owned slaves; others like Barclays Bank were founded on the proceeds while Lloyds of London insured slave ships.

The scars the slave trade left are still to heal. Black Lives Matter has brought our attention to unresolved issues. And despite the slave trade being abolished in 1807, and slavery in the British Empire abolished in 1833, slavery is still a live issue. Who made your trainers, your shirt, your coat, your mobile ‘phone? Maybe a child, a forced labourer in a Chinese prison, an underpaid woman working in an unsafe sweatshop?

Editor’s Note: For further reading, this blog post by Isobel. And here’s one of Isobel’s podcasts on the subject.

Reserve your place on Slavery in the City