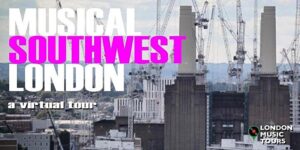 It’s a BIG area to cover (see also Musical Southeast & East London episode later in this series and East London in the last series). The georgaphical ground covered allows us to run riot through the genres once more.

From cradle to grave – we’ll find where Bowie was born in now gentrified Brixton and the spot where Marc Bolan died in Barnes.

We’ll go visiting with the great and good – George Frideric Handel had his first lodgings at Barn Elms and The Beatles were “neighbours” in St Margaret’s.

(While we’re in that neighbourhood we’ll find lots of music at Twickenham Studios, too)

We’ll also pick up cult legend Geno Washington and the Ramjam Band, spy on the Stones as they record in arguably the finest recording studio of the 60s, and see Gustav Holst’s home.

Oh, and pigs really WILL fly over Battersea Power Station.