A virtual tour in search of Bob Dylan in London 1962 – 1966 – a celebration of his life and work in words AND music on the occasion of his 80th birthday.

• The story of his first major London show… and more 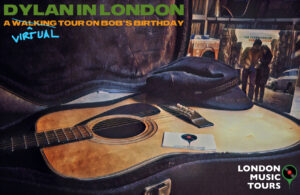 There will be LIVE music