Virtual  London Calling: The Story Of London Through Music 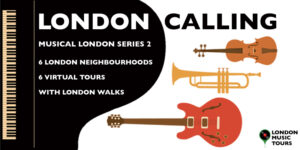 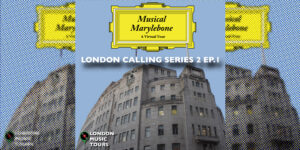 In Marylebone, showbiz and performing arts types have been elbowed out of the spotlight by the nurses, the doctors and the sportsmen.

This tour aims to put the musicians back where they belong: centre stage.

Marylebone is home to the BBC – from Teddy Bear’s Picnic to Relax by Frankie Goes to Hollywood we’ll delve into Auntie Beeb’s often bothersome relationship with music.

The word-famous Proms music festival has its genesis in not one but TWO Marylebone concert halls.

One of London’s most scandalous pleasure gardens is buried beneath Marylebone’s polite, geometric elegance – where we’ll find the music of Handel and more.

So we’ll ask the medicos to move aside for an hour or so – although in Hector Berlioz who lived in the area we have a representative of both the medical AND musical communities – and reveal the history of Marylebone through its music and musicians. 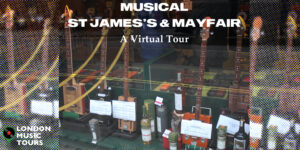 We’re off in search of music in both the royal quarter AND in the heart of fashionable 18th Century London – add the Swinging 60s as a leitmotif and this music tour covers the gamut from Handel to Judy Garland.

Hendrix and Handel will make a cameo appearance (they star in their own virtual tours elsewhere in the London Walks programme)… a pre-fame Paul Simon sings his heart out… We’ll look at the life and death of 30s crooner Al Bowlly… The Beatles go out on top… Nipper the dog cocks an ear… and we’ll take a closer look to see if there really were angels dining at the Ritz.

From the high baroque to Bowie‘s most famous album sleeve, from Thomas Tallis to Louis Armstrong this is one of the most wide-ranging virtual music tours in the series. 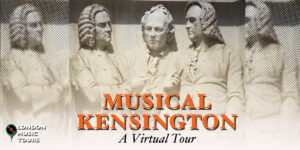 From Hubert Parry to Freddie Mercury, all music is here in Kensington.

The Royal College of Music, where Parry was Head of History – we’ll look at its foundation and the role it plays in the cultural life of the country.

Then there’s the glorious Science Museum where we can look at the ways that music consumption has changed in the 20th and 21st centuries.

And of course, the Royal Albert Hall – Eric Clapton’s “second home” and the venue for the famous Proms season.

With walk-on parts from Pink Floyd, Samuel Coleridge-Taylor, Syd Barrett and Jimi Hendrix, it’s quite a bill! I doubt there’s a Spotify algorithm to unify the artists we’ll cover – but cover them we most certainly will. All music is here in Kensington! 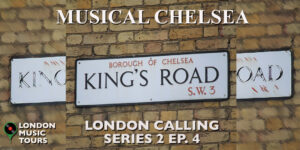 Our musical companions for this virtual tour along the dignified red brick streets, stucco squares and riverside views is an illustrious one. Knights of the Realm Sir Mick Jagger and Sir Arthur Sullivan will rub shoulders with Eastender made-good Lionel Bart and Islington-reared Sex Pistol Johnny Rotten.

Bona fide musical legends from the aforementioned Mozart to Judy Garland to The Beatles will make cameo appearances. 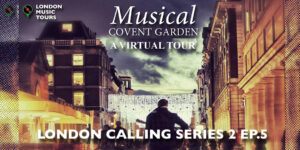 From the Royal Opera House to the theatre where Bob Marley became a legend; via the oldest disc recording studio in Europe to the hotel where Bob Dylan held court in ’65; from Rule Britannia to On The Street Where You Live – this London Music Tour covers the musical waterfront from Arne to Zappa.

We’ll visit The Savoy Hotel and Theatre, St Paul’s Church as featured in My Fair Lady and the Middle Earth Club where Pink Floyd played

400 years of entertainment history in around one hour – you may have often walked down these streets before. But you’ll see – and hear – them differently after this tour.

* The subject for this tour was chosen by public vote thanks to all who took part! If there’s an area of London that you think I should be exploring in a tour, drop me a line! 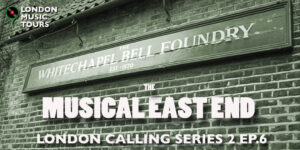 It’s one of the most richly historic areas of London. But if you’re looking for statues and plaques, you’ve come to the wrong place. In this part of town we’re away from the Knights, Dames, Lords and Ladies of the musical establishment.

What we CAN give you is Georgia Brown, voice as true and powerful as a Whitechapel bell; Hoxton’s own Marie Lloyd, the first female superstar of British pop and the queen of the double entendre. We met Lionel Bart, the great composer of Oliver! In the Musical Chelsea tour earlier in the series – we’ll find his roots here in the Jewish East End.

As for musical theatre… from the wondrous Theatre Workshop under Joan Littlewood to the ska & calypso musical The Big Life in the early 21st century, the East End has provided the West End with some of its most memorable stars and shows.

Along the way we’ll link Jewish cantors to The Clash, the Libertines to Alma Cogan and we’ll ask the question on everyone’s lips: “Who Do You Think You Are Kiddin’ Mister Hitler?”

Reserve your place on London Calling: The Story Of London Through Music