How the West End Was Won

Medium read: “The wall” 200+ years before Trump. Aristocracy to the west, the great unwashed to the east, the “wall” of Regent’s Street keeping them separate. Social history in bricks and mortar and “town planning” in the Age of Jane Austen and the Napoleonic Wars.

Long read: It’s 1810. London is at war with France and the ailing George III’s son takes over as the country’s Prince Regent. The Regent wanted a “new London” that would quite eclipse Napoleon’s Paris. And John Nash was the man to plan it for him. This walk through the heart of the West End shows how those plans still determine the way we use the city today. From the novel concept of a square at the top of Whitehall to the grand shopping street with the Regent’s name on it, we will get a deeper understanding how a capital city emerged fit to rule the greatest empire the world had ever known. Guided by Charlie. 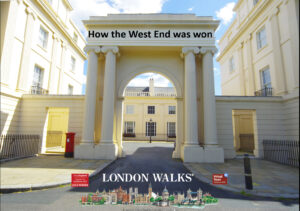 HOW THE WEST END WAS WON – THE PRACTICALS

How the West End Was Won takes place at 2.30 pm on March 13 (2022). Meet Charlie just outside exit 5 (right in front of the mainline station) of Charing Cross Station.

Here’s a podcast in which Charlie tells us a bit about himself, his career, his guiding, his London.

Reserve your place on How the West End Was Won