Virtual  Flower of Cities All – History and Archaeology of Mediaeval London

Explore the ancient City of London with an expert…

The walk is led by Kevin Flude, a former archaeologist at the Museum of London, a Museum Curator and University Lecturer.

A walk which explores London in the Middle Ages, from 1066 to the end of the 15th Century. In 1066 London was not yet the formal capital but as London expanded it took over from Winchester. By 1400 London was dominating the affairs of the Kingdom in spectacular fashion and had grown into a sophisticated medieval Capital. The Walk takes us from Westminster to Bishopsgate. and to the site of one of the few remaining medieval Churches at St Helens. We follow the route of the 15th-century London Lickpenny poem and look at everyday life in the City in the main market streets of Cornhill, Poultry, Bucklersbury and Cheapside.  We also visit the Guildhall and the City Wall. We will walk in the footsteps of Geoffrey Chaucer, in the muddy City Streets, exploring the unhealthy conditions and poverty amidst great riches and pageantry. We will see where the Italians, the German, the Dutch, the Jews, and the French lived cheek by jowl with native Londoners and immigrants from the Midlands. 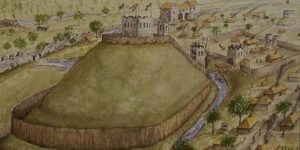