Guided by Brian or Richard III or Tom

Long read: The City of the Gallows. And the city of beheadings, whippings and brandings. Of hanging, drawing and quartering. Of bodies of the executed delivered to Surgeons Hall for dissection (or else hung in chains). Of hundreds of capital offences. Of the house of the rack and gyves. Of lairs of vice. Of pillories, pressing with heavy weights, suffocating dungeons and jail fever that killed countless prisoners (and four out of six judges on the bench). Of prisoners awaiting trial with no legal claim to food. Of vicious torture and punishments both cruel and unusual. Of the cauldron for the carriage, and, all too often, miscarriage of justice in England. Of Londoners going on with their daily life not a stone’s throw away from shocking scenes of slaughter. Now brace yourself. There are, to this day, visible traces – horrifying traces – of that London. And since it all comes down to the guiding this one’s guided by specialists. Tom’s a barrister. Brian has a legal background (and a Law degree). And Richard III has an illegal background (a charge sheet as long as your arm, a charge sheet to be proud of). 3) At the end of the walk there’s a chance to visit something very nasty indeed – what’s believed to be an ancient, surviving prison cell. *You couldn’t enter London without passing the bodies of the hanged – or heads on stakes. N.B. the walk finishes at Smithfield or Charterhouse. Very near to three Tube stops: St. Paul’s, Farringdon, and Barbican.

Crime & Punishment takes place every Thursday afternoon at 2 pm. The meeting point is just outside exit 2 of St. Paul’s Tube. 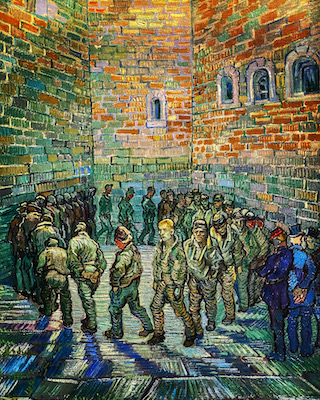 “Newgate Prison was an abode of sorrow, suffering, and unspeakable woe, a kind of terrestrial inferno, to enter which was to abandon every hope….Gaol deliveries were rare, and the boon of arraignment and fair trial was strangely and unjustly withheld, while even those acquitted in open court were often haled back to prison because they were unable to discharge the gaoler’s illegal fees….Light scarcely penetrated their dark and loathsome dungeons; no breath of fresh air sweetened the fetid atmosphere they breathed….The only principle of classification was a prisoner’s ability or otherwise to pay certain fees; money could purchase the squalid comfort of the master’s side, but no immunity from the baleful companionship of felons equally well furnished with funds and no less anxious to escape the awful horrors of the common side of the gaol. The weight of the chains which innocent and guilty alike wore depended upon the price a prisoner could pay for ‘easement of irons’ and it was a common practice to overload a newcomer with enormous fetters and so terrifying him into lavish disbursement. The gaol at all times was so hideously overcrowded that plague and pestilence perpetually ravaged it and the deadly infection often spread into the neighbouring courts of law.” The Chronicles of Newgate

“In the early part of the 18th century, for every person hanged at Tyburn, four would die of ‘jail fever’ in Newgate Prison before they could be executed.”  Murderous Contagion

Reserve your place on Crime & Punishment