Glad to hear it! Click here to hear Kevin introducing the walk 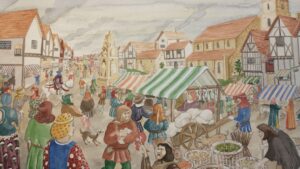 One of the spectators at the Peasants Revolt was Geoffrey Chaucer, born in the Vintry area of London, who rose to be a diplomat, a Courtier and London’s Customs Officer.   He lived with his wife in the Chamber above the Gate in the City Wall at Aldgate.  His poetry shows a rugged, joyous medieval England including many scenes reflecting life in London. His stories document the ending of the feudal system, growing dissatisfaction with the corruption in the Church, and shows the robust independence with which the English led their lives.

His work helped change the fashion from poetry in French or Latin to acceptance of the English language as a suitable literary language. This was helped by the growth of literacy in London as its Merchants and Guildsmen became increasingly successful. In 1422, for example, the Brewers decided to keep their records in English ‘as there are many of our craft who have the knowledge of reading and writing in the English idiom.’

Chaucer and other poets such as Langland give a vivid portrait of Medieval London which was dynamic, successful but also torn by crises such as the Lollard challenge to Catholic hegemony, and the Peasants who revolted against oppression as the ruling classes struggled to resist the increased independence of the working people following the Black Death.

So, yes, a walk which explores London in the Middle Ages. We begin at Aldgate, and follow Chaucer from his home to his place of work at the Customs House, and then to St Thomas Chapel on London Bridge, and through London to Poultry, Bucklersbury and Cheapside before visiting the Guildhall and St Pauls.  We will walk in the muddy City Streets, exploring the unhealthy conditions and poverty  amidst great riches and pageantry.