Virtual  Athens and the Acropolis

Join Chris for a virtual tour of Athens to see to the Acropolis and other buildings from ancient times. 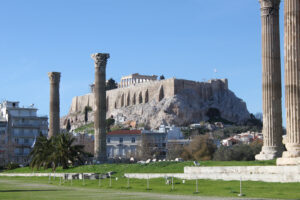 Chris takes us off to Athens the capital of Greece, to tour the Acropolis and the amazing buildings built in the fifth century BCE. We can see the remains of the temples dedicated to the gods, including the Parthenon, described as architectural perfection and the Erechtheum, home of the holiest of Athenian sites. We will pop into the National Museum of Greece and relate the exhibits here to the so called Elgin Marbles in the British Museum. We can also see other Classical Era remains.

This tour will be using Zoom. After you book your tour we will send you a Zoom invitation and password. NB. You will need to have downloaded the Zoom app to take part in this virtual tour.

Reserve your place on Athens and the Acropolis