An American in London: Famous Visitors from Across the Pond

`An American in London’ might not have quite the same resonance of `An American in Paris’, but it has been a constant at least since the founding of the republic in 1776. Join this American* in London on an easy and enjoyable walk to make many of the fabulous trans-Atlantic connections.

*Some American! This one’s guided by Steve Fallon, author of The Lonely Planet Guide to London (and, into the bargain, ace Blue Badge Guide). 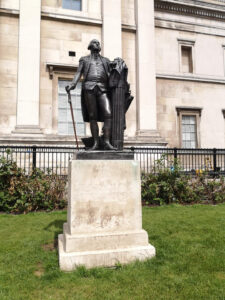 There are a half-dozen statues of US presidents scattered around London, and we’ll meet the first (and least loved here), George Washington, face to face in Trafalgar Square almost immediately. 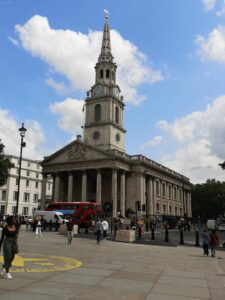 He’s opposite the church of St-Martin-in-the-Fields, the prototype for many colonial churches in New England.  Just around the corner is Benjamin Franklin House, where the `First American’ lived for almost two decades trying to bridge – unsuccessfully, it would turn out – the great divide in Anglo-colonial interests. 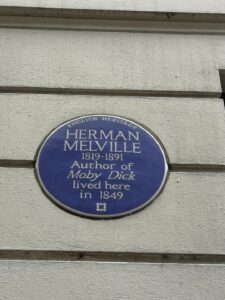 Almost next door is the house where Herman Melville, celebrated author of Moby Dick, spent a couple of weeks’ sightseeing in 1849.  (According to his diary, he visited the British Museum, the London Zoo and attended a public hanging.) 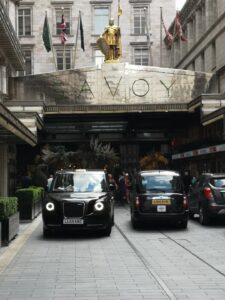 Along the Strand, once the `beach’ of the Thames, is the Savoy Hotel, favourite of American officers, diplomats and journalists during WWII. Its American Bar has been the place for cocktails since 1904. The hotel’s forecourt is the only place in Britain where you must drive on the right. 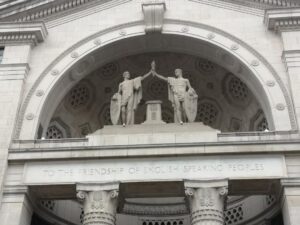 Nearby is Bush House, the former headquarters of BBC World Service celebrating the `friendship of English-speaking peoples.’

Along  Fleet Street, are two of the four Inns of Court, professional associations for lawyers here. The most picturesque of them, Middle Temple, produced five signers of the Declaration of Independence and seven signatories of the U.S. Constitution.

If we follow Fleet Street, once known for printing and publishing and still a synonym for `media’ in London, we’ll come to St Bride’s, often called `the journalists’ church’. It contains a memorial above the main altar to the Pilgrims and Edward Winslow, a leader of the Mayflower expedition and three times governor of Plymouth Colony whose parents were married here. 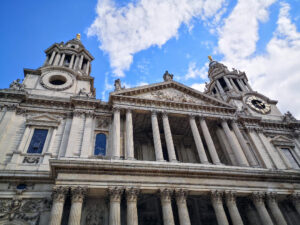 Up not-so-steep Ludgate Hill is St Paul’s Cathedral. Christopher Wren’s Baroque masterpiece. It contains the American Memorial Chapel, built with donations from the British people after the chapel behind the main altar was destroyed during the blitz. It is dedicated to the 28,000 Americans who were killed on their way to or stationed in, the U.K. during WWII. Their names are recorded in an illuminated Roll of Honour.

Reserve your place on An American in London: Famous Visitors from Across the Pond