Guided by Richard P., “the Pied Piper of Beatlemania” 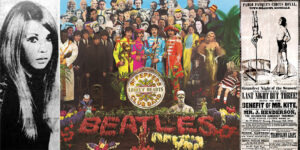 Although the Beatles were from Liverpool, their Sgt Pepper’s Lonely Hearts Club Band album could only have been made in London.

On this unique virtual tour

hear where and how the album was made;
learn about the people and places that influenced the writing of the songs – ranging from circus posters, friends of the Beatles’ children, to TV ads for cornflakes;
and how the amazing album cover collage was put together.
‘A splendid time is guaranteed for all’

Reserve your place on The Making of the Beatles' Sgt. Pepper's Album - London Connections