Virtual  London Calling – The Story of London in Music V

A series of 6 Virtual Tours 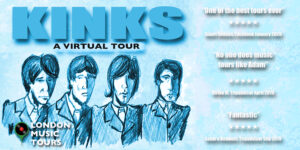 Wherever you are In the world, whatever the size of your group, no social distancing, no masks just great storytelling and music history from a qualified, award-winning tour guide.

Crucially we will look back to the sounds of Black America – the music of the Mississippi Delta through the prism of Chicago, the electric music that charged a generation of suburban English kids from Dartford, Kent to Woolton, Lancashire .