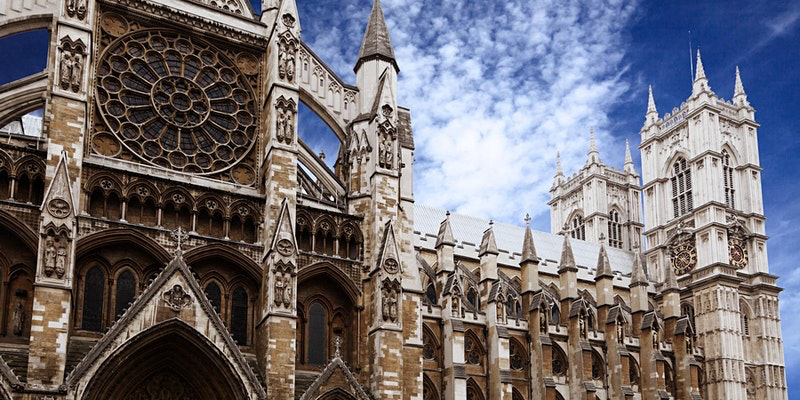 Final resting place of Charles Dickens, Sir Isaac Newton and Elizabeth I, the scene of every coronation in British history since William the Conqueror and the location for no less than 16 royal weddings, Westminster Abbey is one of the largest, most magnificent churches in London. A UNESCO World Heritage Site of epic proportions, it could be Westminster Abbey’s fusion of Gothic and medieval architecture that entices you to visit. Perhaps it’s the chance to visit the royal tombs of kings and queens from a bygone age. Or maybe it’s to relive the moment when the Duchess of Cambridge met Prince William at the High Altar on their wedding day.

Whatever your reasons for a trip to Westminster Abbey there is one question that visitors always want to know-who were the pivotal figures in the Westminster Abbey pageant? But like much in history, the answer is more complex than you might imagine. Please join us on a journey from the Middle Ages, through the turbulent Tudor times, the world wars of the 20th century, right to the present day, as we meet the 8 historical figures who forged the Westminster Abbey that we know today.

When was Westminster Abbey originally built?

This isn’t as simple a question as you may think. In the 1040s King Edward I(who later became Edward the Confessor) chose a Benedictine monastery as the site for his new church. This monastery dated back to 960AD. As he had St Paul’s Cathedral in the East of London, this became his West Minster (Westminster!). Very little of this original building remains.

Scroll on to find out more about Edward the Confessor.

How long did it take to build Westminster Abbey?

The original Abbey lasted until the 13th century. King Henry III fancied an upgrade and decided to have it rebuilt in a more Gothic architectural style. The King had grand ideas, wanting it to be more than a place of worship. Henry III decided that Westminster Abbey would be the place for British monarchs’ coronations and burials. The site was worked on from 1220 to 1272 and it was consecrated in 1269. This wasn’t a quick makeover, it was a fabulously detailed construction.

Further additions were made by Henry V, Henry VII and our dear Queen Elizabeth II.

But now, please join us on a journey from the Middle Ages, through the turbulent Tudor times, the world wars of the 20th century, right to the present day, as we meet the 8 historical figures who forged the Westminster Abbey that we know today.

1. Edward the Confessor. Saint and founder of The Abbey.

Westminster Abbey dates back to the 11th century, when the Saxon King Edward, later to be known as Edward the Confessor, decided that land known as Thorney Island on the banks of the River Thames would be the location for his royal palace. The nearby Benedictine Monastery, built around the time of King Edgar and St Dunstan, became the starting point for Edward’s new monastery, known as the West Minster to differentiate it from the East Minster- St. Paul’s Cathedral in the City of London. Tragically, King Edward was never to visit the consecrated church. His mortal remains were entombed in the high altar, after King Edward was made a saint in 1161, becoming Saint Edward, his body was transferred to the shrine of St Edward the Confessor. The Pyx Chamber, part of the Undercroft, underneath the Benedictine Monks’ dormitory, is the only remaining part of King Edward’s legacy.

2. William the Conqueror. The victorious coronation.

In 1066, William the Conqueror was crowned at Westminster Abbey, following his triumph at the Battle of Hastings. Contrary to popular belief, William the Conqueror wasn’t the first king to be crowned at the Abbey, as King Harold II took this honour, only to be slain at the famous battle. Since then, the coronation of every monarch has taken place at Westminster Abbey, with the exception of Edward V and Edward VIII, who were never crowned. In 1100, Henry I married Matilda of Scotland at Westminster Abbey, the very first Royal Wedding to take place at the Abbey, later to be followed by the wedding of Richard II to Anne of Bohemia.

3. King Henry III. The arrival of the Gothic style.

In the 13th century, great cathedrals were being constructed all over Christendom, including Amiens in France, and the stunning Canterbury Cathedral and York Minster in England. King Henry III pronounced that Westminster be rebuilt in the new gothic style, using the flying buttresses and pointed arches so characteristic of the architectural style. King Henry placed the foundation stone for the Lady Chapel in the East End of Edward’s monastery, with an ambition of creating an abbey fit for coronations and as a resting place for the great English Monarchs. Like his predecessor, King Henry never lived to see Westminster Abbey completed but his remains were entombed here in 1269. Over a century passed with the old Norman nave attached to the new gothic Westminster Abbey, before work continued.

The building of the current day Westminster Abbey spanned centuries, making the question of who designed Westminster Abbey as complex as that of who built this great London landmark.  Henry V made his mark on Westminster Abbey, commissioning an ornate chantry panel to be built over his tomb, designed by John Thirske. But it was the arrival of King Henry VII that brought the next great transformation to Westminster Abbey with the new lavish Lady Chapel, adorned with Tudor emblems. In 1745, the Western Towers of the Abbey were completed, designed by Nicholas Hawksmoor.

Geoffrey Chaucer, author of The Canterbury Tales, was buried at Westminster Abbey in 1400 in what would become known as Poet’s Corner. Located in the eastern aisle, in the corner of the south transept, musician Handel is also buried in this transept, as is Robert Browning. In fact, there are over 3,300 people buried or commemorated at Westminster Abbey, from Charles Darwin to Sir George Gilbert Scott, in recognition of their contribution to Great Britain and British history. To see the graves of the actors and actresses who were not allowed to be buried in the Abbey, The Cloisters is the place to go.

6. King Henry VIII. The end of the monastic life

One of the most tumultuous times in the history of Westminster Abbey, and the United Kingdom overall, is surely the reign of King Henry VIII. Henry VIII ended monastic life at Westminster as part of his reforms of the Catholic Church and it became a Cathedral Church. Henry’s daughter, Mary I, restored the Benedictine monks during her brief reign, before Queen Elizabeth I founded the Abbey as the Collegiate Church of St Peter, Westminster in 1560.  The status of the Abbey as a Royal Peculiar, puts it outside the jurisdiction of the Church of England, and instead of monks, a collegiate body of a Dean and other staff were tasked with continuing the traditions of daily worship. It was at this time that the famous Westminster School was founded.

After World War I, the grave with a cross bearing the words ‘an unknown British soldier’ was found on the battlefields in France and brought to rest at Westminster Abbey on the 11th November 1920, to represent the many thousands of British soldiers who lost their lives. Located at the West End of the Nave, the grave of The Unknown Warrior is a place of pilgrimage and commemoration.

It is Queen Elizabeth II that we must thank for the most recent addition to Westminster Abbey, the Weston Tower which is located near to the Chapter House and designed to Ptolemy Dean. From here, you can visit the Queen’s Diamond Jubilee Galleries, a secret space hidden for over 700 years that has just been opened to visitors, home to such treasures as the largest surviving English medieval manuscript, and precious 13th century stained glass panels. Most of the stained glass in the Abbey church now dates from the 19th century. Westminster Abbey, The Palace of Westminster (Houses of Parliament) and St. Margaret’s Church were awarded UNESCO World Heritage Status in 1987. Yet another new addition to Westminster Abbey are the ten statues of modern martyrs which stand above The Abbey’s Great West Door.

Whilst our late queen had her state funeral at Westminster Abbey, King George VI Memorial Chapel in Windsor was the site of her burial alongside her husband Prince Philip.

Check out our other Westminster Tours and discover all this historical location has to offer.