10 Things You Need To Know About Borough Market

Train tracks rumbling overhead, stallholders plying their wares beneath Victorian railway arches, Borough Market is an intoxicating blend of old and new. A place that has been a hub of trade for hundreds of years, and where the nameplates of 19th century merchants sit alongside those of their 21st century peers. Atmospheric and uniquely London, it’s little wonder that Borough Market has been used as a film location in movies from Harry Potter to Bridget Jones. Keen to find out more about the London gem that is Borough Market? Here are 10 things you need to know. 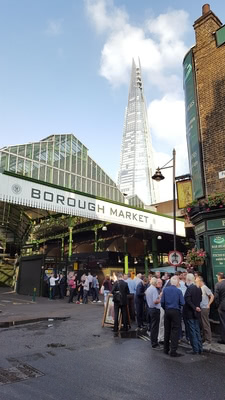 Borough Market is located in Southwark, London’s oldest suburb. So old, in fact, that Southwark was once a Roman settlement. Excavations of the Borough Market site in 1961 found artefacts dating back to the 1st century, including evidence of a Roman land surface about 5 ft. above current sea levels. The Romans built the first bridge to cross the River Thames. By the 12th century, London Bridge was more like a town, crammed with houses. Southwark lay at the Southern end of London Bridge with the City of London on the north bank.

2. There were two Borough Markets.

Borough High Street in Southwark is one of the oldest roads in London, and was the main route into the City of London from the South. In medieval times, it was here that many coaches had to stop, being too wide to cross London Bridge. The area was awash with weary travellers, and to cater for the demand, there were two markets- one in the grounds of St Thomas’ Hospital and one at the base of London Bridge in an area known as The Guildable Manor of Southwark.

3. City of London residents were banned.

As the Southwark markets swelled onto the Southern edge of London Bridge, tempting not only travellers with their goods but City residents too, it caused unrest. Particularly as Southwark was outside of the jurisdiction of the City of London- making law breaking commonplace. In the 13th century, City of London citizens were banned from buying from the Southwark markets. The City wanted control, not only of the markets but to rule Southwark itself and this was granted by Edward VI in 1550 when he sold Southwark to the City. The Guildable Manor Market continued. 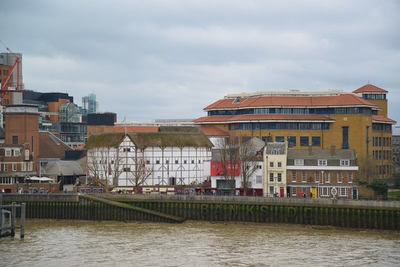 Packed with coaching inns and alehouses, brothels and prisons, 16th century Southwark was already rowdy. Add in the shouts of the market traders, the bellows of cattle and the mass of traders from greengrocers to fishmongers and butchers, and we can only imagine the chaos of this most famous of London markets. Shakespeare’s Globe Theatre was in Southwark, close to Southwark Cathedral.

Some would say that the history of Borough Market really began though in 1756, when Southwark residents campaigned to make the market their own. Locals raised enough money to buy a plot of land called The Triangle, and an Act of Parliament made it a community space, forever. To this day, volunteer trustees continue to run Borough Market on Southwark Street.

6. It became a pure food market. 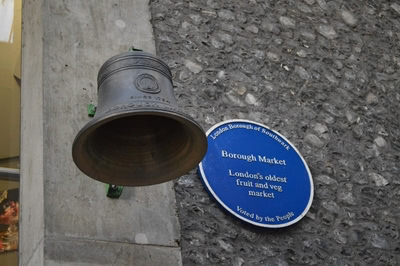 As South London grew in the 19th century, so too did Borough Market, becoming a wholesale market for fruit and vegetables and adding on the Green Market and Jubilee Place. The market buildings, with their distinctive Gothic design, were created by Henry Rose in 1851 and Borough Market became one of the capital’s most important markets.

7. There are good pubs aplenty. 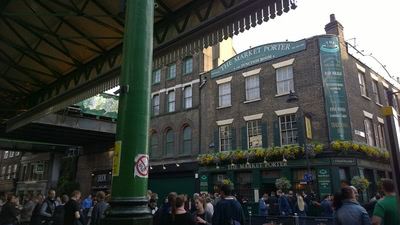 A famous Borough Market pub is the Market Porter. This is where the infamous ‘umbrella’ murder is said to have occurred. Edward Lamb stabbed marketer Alfred Howe, AKA ‘Flash Alf’, in the eye with an umbrella uttering: “Dirty dogs like you ought to have been dead years ago.” Then there’s The George Inn, the last remaining London galleried inn- and featured in Charles Dickens’ Little Dorrit.

With London’s SE1 area growing at a rapid pace alongside the rest of the city, the South Eastern Railway Company wanted to link their London Bridge station with Victoria via a new station at Charing Cross. This would make Westminster, Central London and the West End more accessible, and ease congestion over London Bridge (which had increased 10 fold in the 10 years to 1860). Instead of building through Borough Market, it was eventually agreed that South Eastern would be given a ‘flying leasehold’ to create a railway viaduct running over the market. 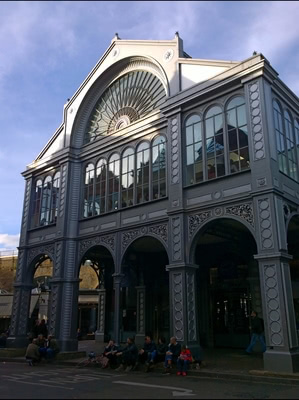 In 1932 the entrance to Borough Market had a glamorous makeover with a new art deco entrance that exists to this day. And when Covent Garden’s Royal Opera House was redeveloped, the portico from the Floral Hall was moved to Borough Market- and remains a Grade II listed building. Less glamorous was the Thameslink Programme of the early 2000s that saw more railway development at Borough Market- including the lopping of the upper floors of buildings like the Wheatsheaf on Stoney Street.

Borough Market’s wholesale roots were challenged by the rise of the supermarket, but it also offered an opportunity for the street market to reinvent itself once more- this time as a retail market. And with this reinvention came new opportunities, and new specialist retailers. Today, Borough Market has over 100 stalls, restaurants, cafés and shops, and offers everything from street food and cheese to wine and French style pastries. You can see the full list of traders at boroughmarket.org.uk.

Traditionally at Borough Market, when it was time to begin trading a huge bell was run. In 2013, the bell was brought back and is rung every day when the market opens. If you’re visiting 8 Southwark Street, be sure to have a look out for it on your visit. The bell sits on Middle Road, which runs through the middle of the market. Borough Market is open each weekday from 10am-5pm, from 8am on Saturday and 10am-3pm on Sundays.

Walking tours that include Borough Market

If you want to discover more about the historic Borough Market the best way is to take a guided walk with us: