Virtual  The Beatles Live in London

Join Richard Porter as he takes you on a virtual Beatles tour of some of the famous, but some lesser known, venues that the Beatles played in their career in London. 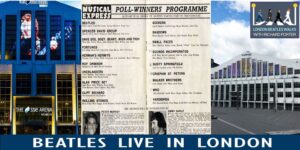 Hear how some of the venues for Beatles concerts are now churches, and trampoline parks!

Through photographs, videos and a live commentary, journey with us to London and discover more about Beatles history.

Reserve your place on The Beatles Live in London