Guide Ian says: “This is a  virtual version of my 5* rated real-world experience. 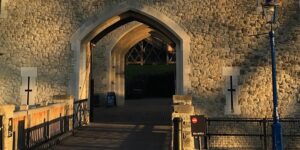 Our tour takes us from Traitors’ Gate at the Tower of London to the Mansion house. We will meet rebels from Boudicca (Boadacea) who burned down Roman London 2000 years ago to the Extinction Rebellion demonstrators who disrupted the Chancellor’s Mansion House speech in 2019.

In between, we will encounter three Tudor Queens who were beheaded in the Tower, Irish bombers, the Archbishop of Canterbury who was lynched by Revolting Peasants, the slave trader who switched sides, the Scottish noble who literally laughed his head off in 1747 and many other extraordinary characters whose lives and deaths are etched on, above and beneath the streets and alleys of London.”