Medium read: We set our course by the best old pubs in town – including the most famous London inn of all. Old pubs that are, as every English pub should be, a solace and a delight.

Long read: The “street of ink” and off it gnarled, brooding back-alleys, secluded courtyards and tortuous zigzag passages. Oh there are famous sights, but to get to them we have to walk crookedly, through a maze of curiosities.

We start at Temple Place, Waldorf Astor’s eclectic fortress on the Thames described as a cross between ‘Victoriana and Disney’.

Then make our way up 17th-century steps to the Inns of Court named after those fighting Monks, The Knights of the Temple of Solomon, buried within the 12th-century Temple Church the greatest Knight of them all. Then there’s spectacular Middle Temple Hall, arguably London’s finest surviving Tudor building, with its Elizabethan oak table and double hammer-beam roof. 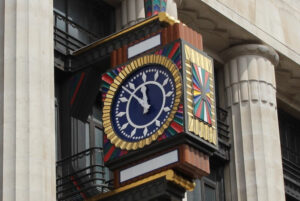 Then to Fleet Street itself. Once a Roman thoroughfare and then a stretch of monasteries dissolved in the 16th Century, Fleet Street links the double nucleus of London, the two cities – Westminster and the ancient City of London. Before street numbers you would navigate medieval London by the hanging signs and still here today like nowhere else it pays to look up – the sign of The Marigold, the Three Squirrels, Twining’s, the fading letters of a newspaper giant, the sumptuous Egyptian style Art Deco clock of the old Telegraph building, the cinematic interior of the Modernist Daily Express to the immense Gothic Revival of the Royal Courts of Justice.

Fleet Street has a legal, publishing and literary history stretching back hundreds of years and a tavern culture that has served regulars Doctor Samuel Jonson, Mark Twain, Charles Dickens, P.G Woodhouse and Arthur Conan Doyle. And though the press have long since dispersed, Fleet Street remains the journalist’s spiritual home, a metonym, a thoroughfare of gossip, the street of ink, the street of drink, of legendary boozers – The Cheshire Cheese, The Cock Tavern, El Vino, The Punch, The King and Keys, The Seven Stars, The Old Bell and The Tipperary. And finally from one cut-throat business to the next, the home of Sweeney Todd, the legendary demon barber.

Across the finish line: we end in a storied old pub.

Reserve your place on Hidden Pubs of Old London