Lovely story behind this one. One of Kevin’s walkers was cleaning out an elderly relative’s attic and found an ancient book, a book from another era. It was an 1809 guidebook to London. She thought, “who do I know who’d like this? I know who’d like this. Kevin Flude, the archaeologist and guide in London who’s taken me on several tours, would like this.”

She sent it to Kevin. 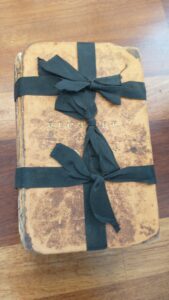 Who was thrilled to get it. It is, after all, in effect a guidebook to Jane Austen’s London, which is one of the tours in Kevin’s vast repertory.

So – typical Kevin, this – delighted, he’s created a virtual tour based on the 1809 London guidebook. Created it for the lady who so thoughtfully and generously gifted him the book. And, well, he’s going to gift her the tour. Do it for free for her.

And, yes, he’s decided to throw it open to one and all. And, as a one-off, offer it to all takers on a donation basis. So no fixed ticket price. 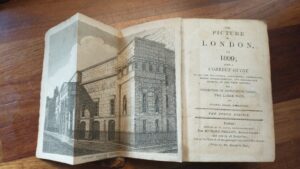